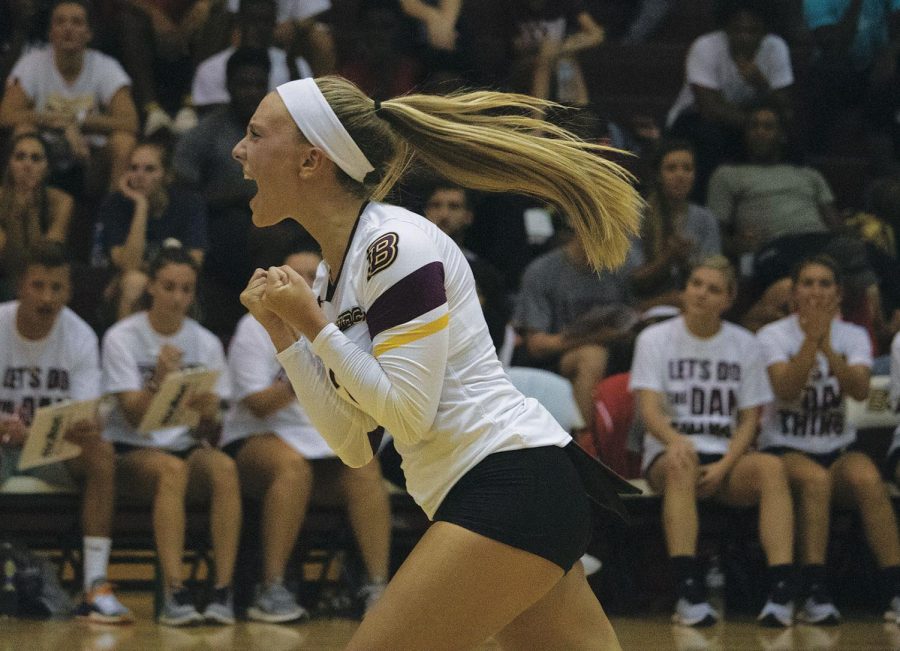 Junior defensive specialist Alyssa Cianciulli (above) rejoins the Huskies after leading the team in digs with 645 in the 2018 season.

With 11 new recruits joining this year for the second season of Women’s volleyball, Coach Kreiger “can’t wait to get started!”
“We are very excited about this incoming class. We addressed the needs in our program and added talent and experience to our roster at the same time,” Kreiger added.
Krieger’s excitement makes sense, since last year’s team made up of 28 student-athletes divided into 23 first-year students, two transfers and three former members of the Bloomsburg club team. Now with most of the players having one year of experience under their belt, it’s safe to assume the Huskies will make strides forward from their 2018 campaign.
This exciting incoming class compliments big pieces returning from last year’s team. The Biggest being junior defensive specialist Alyssa Cianciulli, who concluded last season second in the PSAC, and fifth in the nation in digs per set at 6.79.
The Huskies also return their leader in blocks from last season, sophomore middleblocker Grace Giza, who notched 51 total blocks (0.68 per set) a year ago.
Other big returning pieces include sophomore Mary Kate Mooney (203 kills, 231 digs), sophomore Mia Nicholes (120 kills, 46 blocks), sophomore Sydney Buell (66 kills, 1.78 per set). All should help carry the load offensively while sophomore Bryn stek returns looking to compete for the starting setter position which she held near the end of the 2018 season.
Seeing how these women evolve into leadership roles this season adds an exciting storyline to follow throughout the season.
Their leadership will be key if the Huskies are to improve upon their 6-22 campaign during their inaugural season in 2018.
Bloomsburg only has one lone senior, last year with Sarah Gomish. But since then, Gomish has joined the Huskies coaching staff as a graduate assistant. Gomish’s leadership last season should continue as she now trades her uniform for a clipboard.
Although the wins were sparse, two of their six victories came in conference play with a straight sets victory over Kutztown Oct. 5 (First PSAC win in program history) and again in their first interdivisional, road, and five set wins against Lock Haven Oct. 30.
Other notable victories include the programs first on Aug. 31 beating Virginia Union 3-1, topped off with a straight set victory over Chestnut Hill in their inaugural home match.
Picked to finish third in the PSAC Central Division, behind the Golden Bears of Kutztown recieving two first place votes, and the Warriors of East Stroudsburg recieiving 15 first place votes. The Huskies have the opportunity to flourish from an underdog role this season and use the doubt from around the conference to make this a memorable season.
Their 2019 campaign begins this Friday, Sept. 6, and Saturday, Sept. 7, kicking off their regular season traveling to Ashland, Ohio to take part in the Ashland Tournament. The Huskies start hunting and sink their teeth into Fairmont State and Felician on Friday before meeting up with Notre Dame (Ohio) and Ashland on Saturday.
Husky nation will have to wait however, with the ladies not having their first home match until Friday, Oct. 4 when Bloomsburg matches up against Clarion University at 7 p.m.
Time will tell if the Huskies can earn a top eight record in the PSAC to make the playoffs, but everyone loves an underdog story. It’s safe to say Bloomsburg would create quite the buzz on campus if they can snatch some big W’s early on in the season.