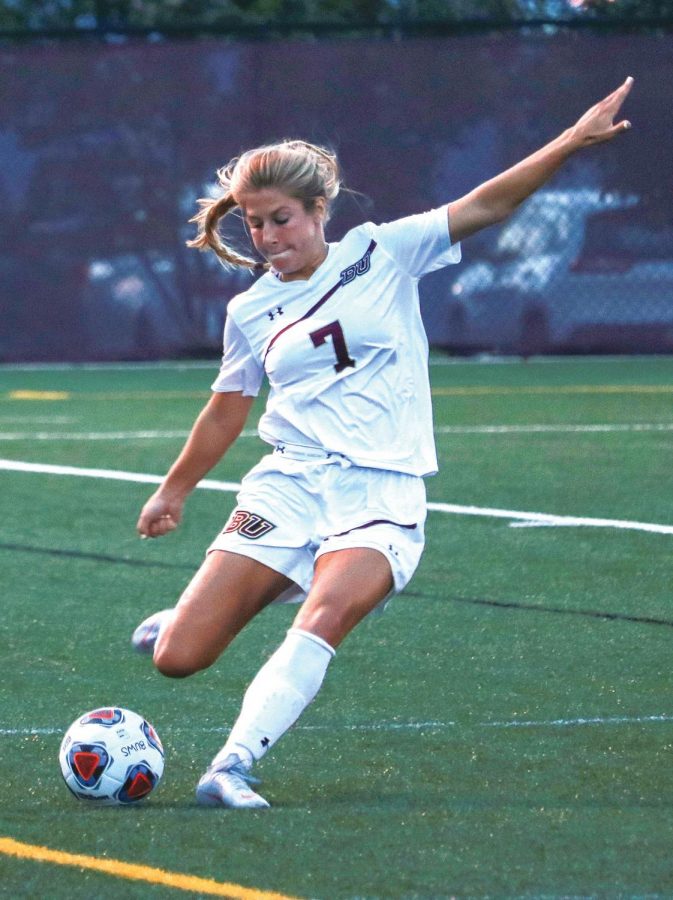 Senior defenseman Jessica Milligan (above) also highlights the number of returns for BU in 2019.

The 2018 Bloomsburg Women’s Soccer team proved the PSAC (Pennsylvania State Athletic Conference) wrong after starting the year nearly last in the preseason poll a year ago.

The Huskies used all the doubt in their favor after winning the 2018 PSAC regular season and tournament crown, along with making it all the way to the quartefinal match of the 2018 NCAA division II women’s soccer tournament.

After a blistering 17- 3-3 overall record in 2018, the Huskies went on to fall to the eventual National Champion, the University of Bridgeport, by a score of 3-1 last December.

However, Bloomsburg’s magical postseason run put this year’s team into incredible position leading up to the 2019 season.

The Huskies were picked to finish atop the PSAC Eastern division after receiving all but one first place votings in this years preseason coaches’ poll, which was released a few weeks ago.

Along with the #1 ranking in the eastern side of the conference, the Huskies were also given a #5 national ranking according to United Sccoer Coaches prior to the start of the 2019 season.

The Huskies lost five seniors to graduation last May and went on to add 11 freshman recruits to this year’s roster. Leaving the question, can this year’s squad possibly make it further than last years?

One of the most notable athletes of this year is all american defenseman Tayah Naudascher. Naudascher anchored a defensive unit for BU that allowed just 12 goals throughout the whole season. The Huskies led all of the PSAC in-shots allowed on goal with 77 (3.35 per game) thanks to Naudascher’s help.
Naudascher also will be reunited with her defensive partner from last season, senior Holly Norbury. The returning of the starting d-pair for the Huskies from last season makes it feel even more possible that BU can live up to these high expectations prior to season kickoff this afternoon.
Also a highlighting returner for BU is redshirt junior goalkeeper Jenna Hawkins. Hawkins had a storybook year last season where she broke the single-season school record with 13 shutouts and a 16-3-3 overall record. Hawkins’ 0.53 goals against average a year ago came just shy of breaking the single season school record of 0.52, which has not been broken or tied since the 1998 season. Hawkins holds an overall record of 24-9-6 in her two years as the Huskies starting goalkeeper.
For the front line, BU returns juniors Lauren Hoelke and Natalie Holmes who are coming off great sophomore year campaigns.
Hoelke led BU in shots on goal (33) and points (18) after three goals and a team leading 12 assists in the 2018 season.
Holmes rejoins the Huskies after a 10 point season last year. The junior forward had a strong sophomore season at Bloomsburg, as she recorded four goals and two assists.
Redshirt senior forward Bryce Watts returns to this years roster after missing a majority of last years postseason with a torn ACL.
What most people do not know is that Watts spent the beginning of her collegiate career at the University of Florida and Ohio State University. Watts landed at BU after hurting her knee on multiple occasions in her time at the Division I level. A experienced player like this should help the Huskies plenty in their pursuit for another post-season run.