Football back home after last week’s comeback win at Edinboro 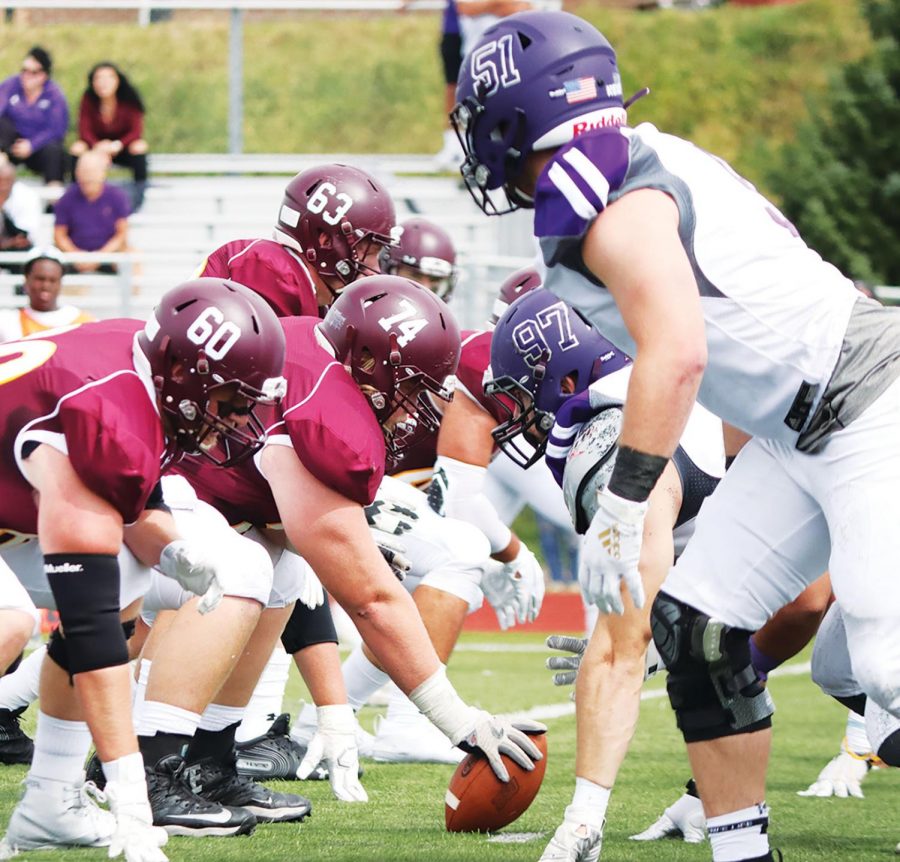 The BU offense showed more production in their win over Edinboro last week.

Seeking to build on last week’s momentum stemming from a 24-21 victory over Edinboro University, the Bloomsburg University football team host’s Mercyhurst University this Saturday at 2 p.m.
Last week’s momentum builder almost never happened, waiting till the last 4:50 of the fourth quarter where senior receiver and punt returner Michael Allen received a punt at Bloom’s 35 and took it 65 yards untouched to the house for the go-ahead score.
For Allen, that marked his first punt return for a score and longest return of his collegiate career. That career moment got highlighted when Allen was named Pennsylvania State Athletic Conference (PSAC) special teams’ player of the week.
The punt return came at a good point for Allen, as the senior receiver did not do much in the Huskies season opening loss to Stonehill, recording just four catches for a total of 23 yards.
The drama didn’t end there for the Huskies, as Edinboro started out their next drive on their own 43- yard line needing only 57 more yards to break the Huskies hearts.
Fortunately, as the Fighting Scots approached Bloom’s 39-yard line, redshirt sophomore defensive lineman Sir Michael Larsen strip sacked Edinboro quarterback Andrew Tomko to seal up the Huskies first win of the 2019 campaign.
Everything seemed to turn on late for the Huskies, seeing that 169 out of their total 220 offensive yards came in the third and fourth quarters.
Along with converting 8 of 17 third down opportunities to keep Edinboro’s offense stuck on the sideline, the old adage it’s not how you start but how you finish reigned true as ever for our Huskies.
The same can be said for the defensive side of the ball, as the Huskies held Edinboro to 267 yards of total offense with only 107 of those yards coming in the second half. On both sides of the ball, the Huskies played with ice in their veins during the most critical points of the Saturday afternoon contest.
That momentum needs to stay with the Huskies if they have any chance to knock off Mercyhurst, who holds the same 1-1 record. Meaning, the Lakers will come in with the same motivation as Bloom to get back over .500 thus far in 2019.
Bloom’s defense will have their work cut out for them as Mercyhurst played two completely different styles of offense through the first two weeks of play.
Mercyhurst put up an impressive 209 yards on the ground to only 129 through the air week one, then completely flipped the script to only 21 rushing yards and 311 pass yards week two.
Seeing that the Lakers are most successful through a dominant rushing attack, stopping the run should be paramount for the Huskies defense on Saturday.
On BU’s offensive side, the Huskies try to maintain a pretty balanced attack; Putting up a total of 195 passing yards and 193 rushing yards through the first two weeks, led by senior running back Qmac Quiteh and reshirt freshman quarterback Logan Leiby.
Leiby again showed his toughness against Edinboro, completing 12 of 22 for 143 yards and a touchdown, in the young quarterback’s first collegiate win under center for the Huskies.
A positive trend that needs to continue for the Huskies is third down conversions. Through the first two weeks, the offense has converted third downs at a 50 percent clip of 16-32.
Historically, the Huskies haven’t fared well playing Mercyhurst, especially recently. Going 3-4 all time versus the Lakers, and having lost the previous two matchups, last year’s battle ended with a close game in a 14-10 Lakers win. The last victory for the Huskies against Mercyhurst came in a 38-22 victory during the 2014 season.
Playing at home should seemingly be an advantage, but the only time these teams met at Redman Stadium in Bloomsburg was in 2015 where the Lakers came away with the victory.
Bouncing in between 7-4 and 6-5 the past four seasons, a victory for the Huskies Saturday would not only start a two-game winning streak but could build early season momentum towards their first double digit winning season since their 2014 11-win season.
Kickoff between the Huskies and Mercyhurst is set for 2 p.m. on Saturday.