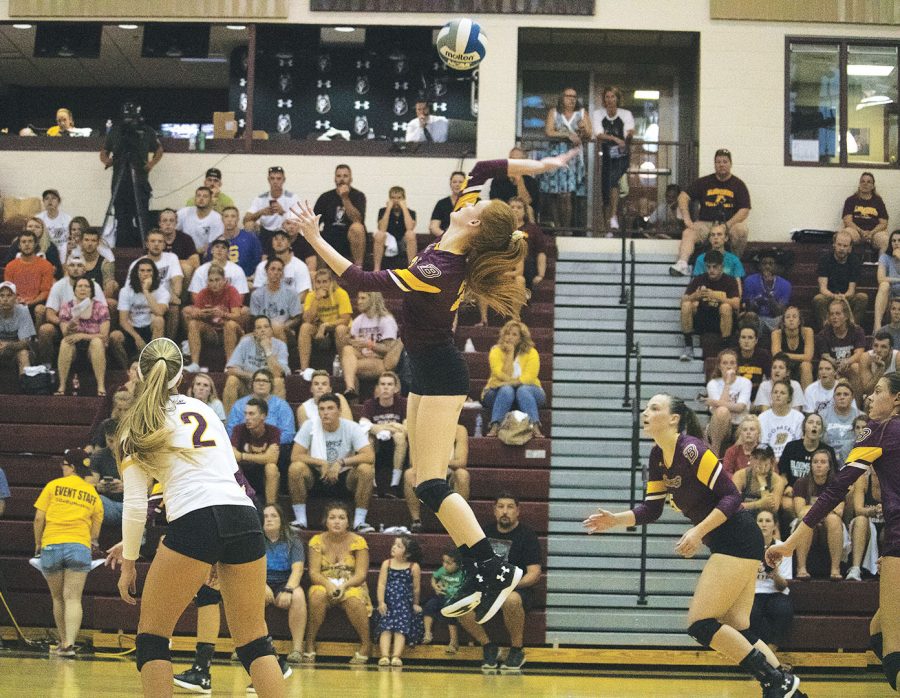 With the Bloomsburg University women’s volleyball season in full swing, our second-year Huskies volleyball program is off to a decent start thus far in 2019.
Right now, their overall season record is 3-5. 3-5 is not horrible, considering they were not home for any of those games. The women are going to have to get in a winning mood for their next seven games that are all on the road.
A few more wins towards their record will be a great morale boost for their first home game on that comes on Friday, October 4th against Clarion University at 7 p.m.
The struggle to win may come from the fact that the BU women’s volleyball team is extremely new. Women’s volleyball was only added to the university’s list of competitive varsity sports in the fall of 2018.
This means an entirely new program and an entirely new coaching staff. Dan Krieger is the head coach of the women’s volleyball team. He has experience from coaching Lock Haven University from 2011-2015, volunteering as an assistant coach at Clarion University and then heading to Juniata College as the assistant men’s coach.
Kreiger’s experience can be a valuable resource for the women of the BU team.
While the Huskies are striving for a win, freshman Julia Burcin from Bethlehem, P.a. is not only showing her consistency but while doing that she set a new school record with seven assisted blocks while the entire team had a total of 12 in the opener during the Post University tournament in Waterbury, C.t. this past Sunday.
If Burcin is coming out that strong as a Freshman, her progression of skills throughout her college career as a middle blocker will help the team immensely.
Hopefully, Burcin keeps showing out for the upcoming games like she did this past weekend.
Another notable occurrence that happened at the Post University tournament this past Sunday was the Huskies loss of the first two sets to Felician University this past Saturday.
However, they picked up the hustle and eventually won the last three sets ending with a 3-2 score accounting for one out of the three total wins the Huskies have in 2019.
If the team keeps their fighting spirit that was exhibited on Saturday, they will do just fine for the rest of the season, no matter the extent of the competition.
A powerhouse of offensive strength comes from the help of sophomore Mary Kate Mooney from Royersford, P.a. who leads the team in kills with 82 total.
Defensively, the Huskies are led by junior defensive specialist Alyssa Cianciulli, who leads the PSAC in digs with 217 this season which converts to an average of 6.58 per set. The closest player in the conference to Cianciulli in digs is Erin Carmody of Pitt-Johnstown, who has recorded 185 thus far this season.
This week the Huskies prepare for a tournament held at Davis & Elkins College on Friday, September 20.