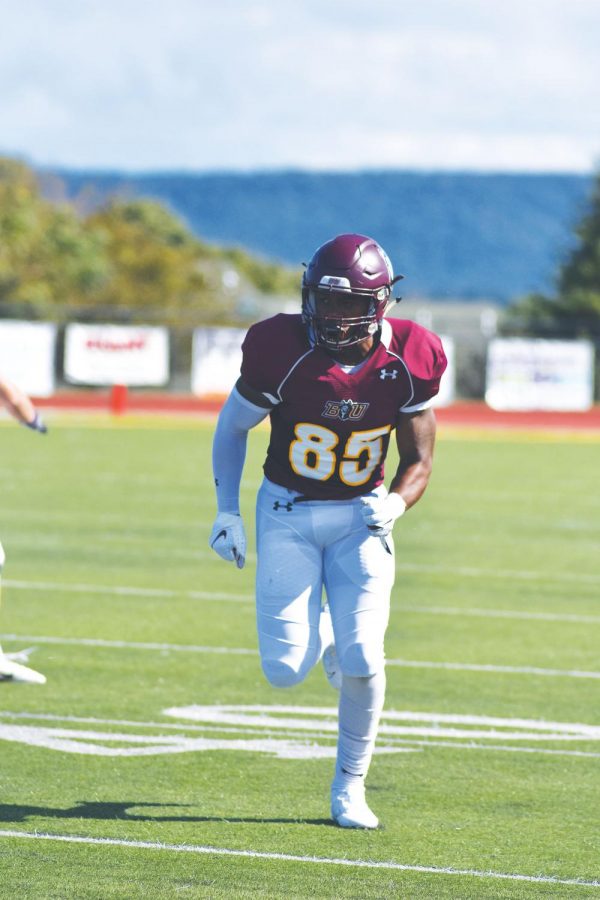 The Huskies are 47-24-1 all-time against rival Kutztown.

Feelings of déjà vu started right away for BU, allowing a 71-yard, almost 4-minute long, opening drive by the Red Raiders topped off with a 38-yard touchdown pass.

Causing no damage in their first drive, Bloom gave the ball right back to Ship who promptly marched right back down the field. This time a 74-yard TD drive completed in only a little over 2 minutes quickly increased the Husky deficit to 14-0 eraly in the afternoon.

Shippensburg then continued their opening half onslaught in the second quarter, scoring yet another touchdown at the 11:37 mark increasing their lead to 20-0.

A nine play, 75-yard drive accumulating five minutes saw redshirt sophomore running back Khalil Nelson break off a 12-yard endzone run to mark the first of his collegiate career. On top of that, Nelson also rushed for a career high 70 yards.

Getting the ball back, Ship seemed poised to construct their fourth straight TD drive of the game. This time however, the Husky defense stood tall in the red zone just allowing a field goal bringing the score to 23-7 at the half.

That score remained still throughout a remainder of the game, until Ship closed the door with a six-minute, 10 play, 55-yard drive late in the fourth quarter increasing their lead to 30-7. Doing some scoreboard dressing, Bloom added a garbage time TD of their own when redshirt senior wide receiver Duffy Gilhool hauled in a 16-yard pass from quarterback Logan Leiby bringing the final score to 30-15.

Even in defeat, BU did post some bright sports throughout the game. Senior linebacker Alex Annan lead the Huskies with 11 total tackles accounting for six on his own including one of the two sacks mustered by the defense.

Also on the defensive side of the ball, sophomore defensive back Chris Monaco was responsible for the only takeaway of the game by either team when he recovered a fumble early on in the third quarter.

A lot will have to change for the Huskies in order to come away with a victory this Saturday as the welcome their first conference rival, the undefeated Golden Bears of Kutztown. As if boasting an undefeated record wasn’t enough, Kutztown also owns victories in the last three matchups against Bloom. Including last year’s 44-10 victory at Kutztown.

Coming into the contest, Kutztown has totaled an impressive 158 points while only giving up 81 points. Even scarier for Bloom, those points have mostly been evenly dispersed throughout the first four weeks.

Each game has seen the Golden Bears put up at least 30 points, with their highest total coming from a 54-point outburst against the Assumption College Grey Hounds. However, last week saw Kutztown in its first close contest all season when they defeated Shepard University 34-27 in their PSAC opener last week.

Hopefully that close game stalls the Golden Bears early season momentum enough for BU to pull off the upset.

Shutting down the passing attack will be if the Huskies hope to pull off the upset. Through the first four weeks, Kutztown’s QB Collin DiGalbo has amassed 1209 passing yards along with 13 touchdowns.

No doubt BU’s defense has a lot of pressure facing them in this matchup, but if it lives up to the challenge it could lead to a huge season turnaround win.

A potentially good sign for our Huskies this weekend  is hosting the Golden Bears at Redman Stadium this go around. Historically, Bloomsburg has played Kutztown very well at home, posting a 3-1 all time home record against the Golden Bears.

Kickoff against the Golden Bears is slated for 2 p.m. this Saturday at Danny Hale Field at Redman Stadium on Parents’ and Family weekend.

The Huskies then hit the road to continue conference play when it faces West Chester University on Saturday, October 12.