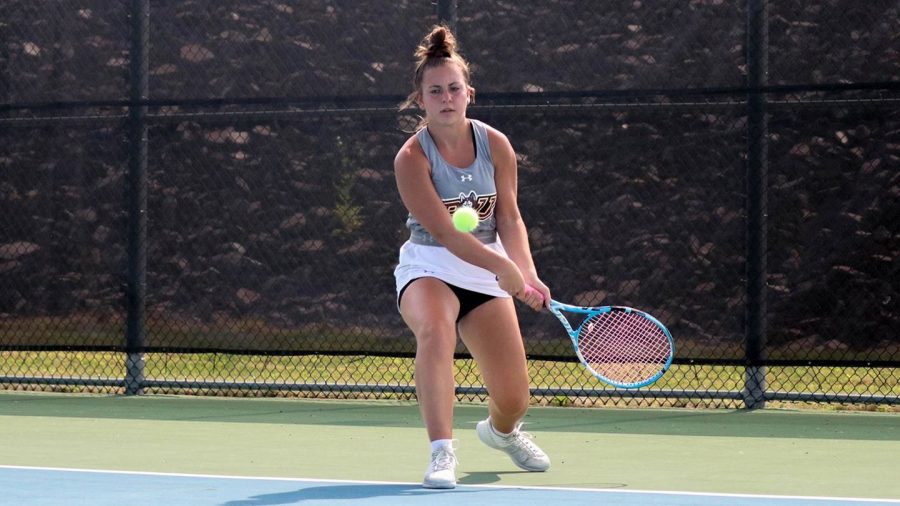 The women’s tennis team defeated Chestnut Hill College this past Sunday by a score of 4-3, Sarah Capoferri (pictured above) won the final match to secure the victory.

The men and women’s tennis team both battled hard this past Sunday afternoon against Chestnut Hill College. The women ended up victorious beating the Griffins 4-3.

Unfortunately, it cannot be said for the men who were shut-out with a final score of 7-0. Although this was a non-conference match up, the women still played as hard as ever. This was head coach Rebecca Helt’s first run as coach for Bloomsburg University, needless to say, it went well for her.

The women started by winning two out of their three doubles matches. Unfortunately, that was followed up by Chestnut Hill winning their first three singles matches.

Luckily, junior Giovanna Bonito from Pindamonhangaba, San Paulo, Brazil won her singles match against Nicole Yang to stop the Griffins from advancing any further. Freshman Luana Bernardi from Aruja, San Paulo, Brazil followed that up with a win against Gianna Vassalluzzo.

A Husky victory was also earned by the duo of junior Isabella Sarquis and Bernardi. Their dynamic teamwork was able to overcome Chestnut Hills’ Nicole Yang and Mariana Sanchez, resulting in a 6-4 win. This was critical to the Huskies’ victory, as it took the score to a 3-2 deficit and set up the win.

To complete their victory, freshman Sarah Capoferri from Lancaster P.a. won against Mariana Sanchez to give them the team total of 4-3.

This was a hard-fought victory for the Huskies, and it is a good confidence boost to get them through the rest of the season.

After the cancellation of the men’s opening match on September 14, the team wanted to start off the season with a bang this past Sunday against Chestnut Hill College.

Unfortunately, they came up short. Hopes were high after Bloomsburg’s Nagid Walle, a junior from Willemstad, Curacao, defeated Tom Pitchley, at #1 singles in the first set with score of (6-4).

With their victory, the Chestnut Hill Griffins have achieved a perfect record to date and continue play in the spring of 2020.

The BU men look to improve upon their 0-1 this upcoming weekend while the women have an opportunity to create a two- game winning streak for themselves as they host the Pennsylvania State Athletic Conference (PSAC) Singles and Doubles Championships.

Their defeat here may not end up being as bad as it looks since the Chestnut Hill Griffins are not in Bloomsburg University’s conference, meaning this loss has no standing on the men’s place in the PSAC.

Ideally this 0-7 loss can be used as a building point to progressing their season, along with a motivation to perform to the highest ability at the PSAC Singles and Doubles Championship.

Being the hosts, the team faces the added pressure of playing in front of their extended friends and family for the upcoming Parents’ Weekend.

The tournament opens at the Burt Reese Tennis Center on Saturday, October 5, at 10:00 a.m. and will continue through Monday, October 7.

This is a great opportunity for both teams to advance their records and create more chemistry as a team whether they are working together on the court or not because having a good support system can contribute to better performance.