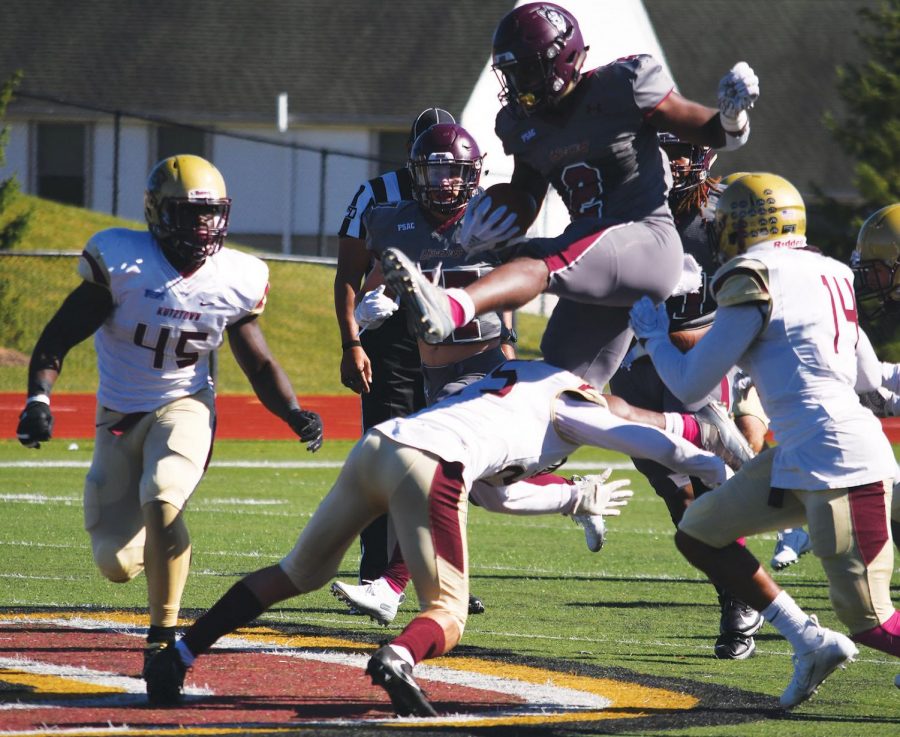 Redshirt junior running back Nyfeast West (pictured above) hurdles the Kutztown defender in the Huskies last game against the Golden Bears this past Saturday.

Despite a phenomenal defensive effort, Saturday afternoon the Bloomsburg University football team dropped its third straight game of the season falling to Pennsylvania State Athletic Conference (PSAC) opponent 24th ranked Kutztown Golden Bears 27-12 at Danny Hale Field at Redman Stadium.
Coming into the contest, the Golden Bears averaged an impressive 483 yards of total offense. Not only that, but each game previously Kutztown put up at least 30 points, a tall task for the BU defense but they met the challenge.
Limiting the Golden Bears to almost 200 yards less of their total offensive average at 285 (95 rush yards and 190 pass yards), while holding them to their lowest point total of the season.
Unfortunately, Bloomsburg’s offensive unit couldn’t hold up their end of the bargain, though it was not for lack of effort.
On the very first drive, facing a fourth down and four at their own 31-yard line, ran a fake punt when redshirt sophomore punter Jaco Sattamini was brought to the turf after only a one-yard gain, allowing KU to take over on downs.
Kutztown took advantage of the great starting field position almost immediately, as it took them two plays to score on a Collin DiGalbo 21-yard pass to Diego Torres to open up the scoring at 7-0.
Getting the ball back for their next drive, Bloom played the keep-away game, putting together a 21 play, 64-yard drive. Frustratingly unable to push the ball into the endzone, sophomore kicker Cameron Shollenberger came in to nail a 28-yard field goal to bring the score to 7-3 with 14:56 left in the first half.
Receiving the ball back, Kutztown immediately swung the momentum back in their favor with a 72-yard kickoff return. Then only five plays later, a 13-yard touchdown run from Keagan Harbin brought the score to 14-3 with 12:20 left in the first half.
Our Huskies kept fighting though, with a couple of nice runs from redshirt junior Nyfease West and redshirt sophomore Khalil Nelson, the Huskies found themselves in striking distance again at the Kutztown 13-yard line.
Frustratingly, BU’s offense sputtered again and had to settle for a Schollenberger 37-yard field goal to cut the deficit to 14-6 at the 8:14 mark in the second quarter.
Kutztown’s offense maintained the momentum they gained from their previous drive and scored once again before the half on a nine-yard touchdown pass from DiGalbo to Abdul-Hassan Neblett, increasing their lead to 21-6 at the break.
DiGalbo stayed hot, coming out for the second half as he threw a nine-yard touchdown to Jake Novak extending their lead to 27-6 and giving DiGalbo his third touchdown pass of the day.
The score remained stagnant until 1:02 left in the game when the BU offense finally put together a touchdown drive when redshirt freshman Logan Leiby broke the plain with a one-yard touchdown run to bring the scoring to its final.
The Husky defense held strong throughout most of the game, allowing 173 yards of total offense in the first half and only 112 yards in the second. They put up a measly total of 201 yards of total offense with only 87 yards in the second half, and 64 of those 87 yards came in the touchdown scoring drive.
The offense will need to wake up if the Huskies want to have a chance at pulling off a huge upset this week when they travel to 14th-ranked West Chester University.
The Golden Rams, like Kutztown, also boast an undefeated record of 5-0 to start the season so far. Averaging 33.6 points per game along with 393.4 yards of total offense, lead by duel threat quaterback Paul Dooley who averages slightly over 200 yards per game along with six touchdowns.
Rushing, Dooley averages 49.6 yards per game paired with four touchdowns. Besides Dooley on the ground, the Golden Rams runningback Ja’Den Mckenzie averages 73.6 yards per game with 8 touchdowns.
BU’s coaching staff, trainers and players will need to be on top of their game to have a chance in this one.
One of the Huskies’ best opportunities to make a name for themselves this season gets going this Saturday, Oct. 12, 12:00 p.m. at Farrell Stadium.