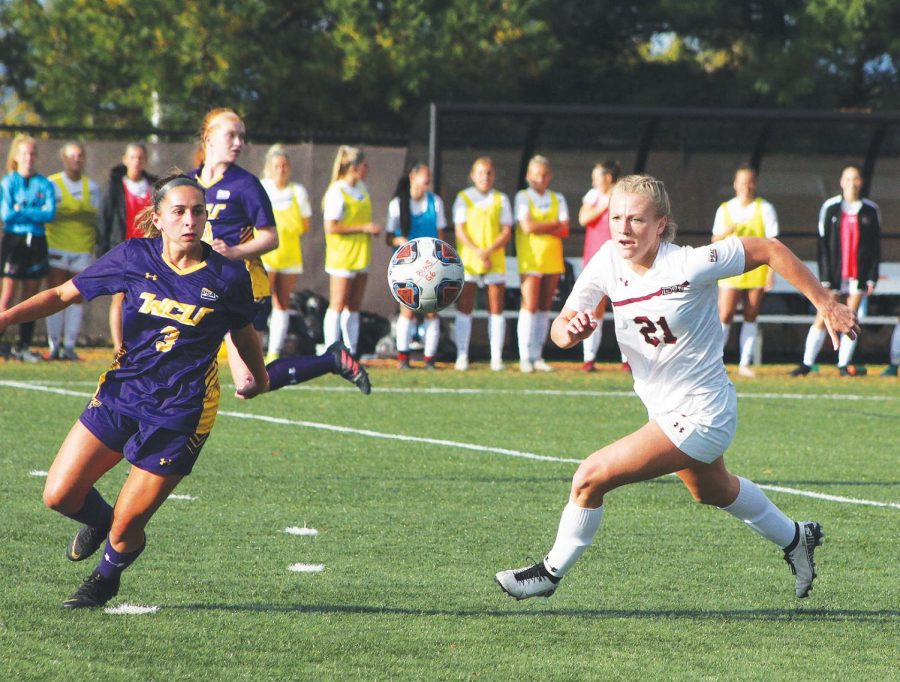 With the win, Bloomsburg now boasts an 11-1 overall record with an 8-1 mark in divisional play. The loss for Shippensburg drops its overall record to 5-7 (3-7 PSAC) as the Red Raiders now find themselves with two wins in their previous five matches, all against conference opponents.

The Huskies only loss comes from a 1-0 double overtime heartbreaker to East Stroudsburg back on September 11. BU has not lost a game since the loss to the Warriors over a month ago.

The Huskies recently moved up 12 spots in the NCAA division II national women’s soccer rankings after defeating conference foes West Chester and previously undefeated Millersville in back-to-back matches, who were both ranked ahead of Bloomsburg prior to the matches. The Huskies moved from #21 to #9 in the country between the last two updates of the rankings. Millersville dropped to 13 after their first loss of the season to Bloomsburg while West Chester dropped down to 20 in the overall rankings.

A Bloomsburg and Millersville win on Wednesday night leaves the Huskies tied with Millersville for first place in the PSAC eastern division standings, as both teams now hold an 11-1 overall record along with a 9-1 mark in PSAC play.

Shippensburg struck first on Wednesday night in the 35 minute of play with a goal from Julia Dalton. Dalton’s shot came through a tight window before getting past Bloomsburg redshirt junior goaltender Jenna Hawkins inside the near post to make it 1-0 in favor of the Red Raiders.

Just 18 seconds later, the Huskies found a tally came from junior midfielder Christina Popdora after she collected a rebound off a shot from freshman forward Abby Groff. The shot from Groff deflected off the post directly to Popdora for her second goal of the 2019 season.

The two teams then went into halftime knotted up at 1-1. Shippensburg edged Bloomsburg in first half shots by a 6-5 margin through 45 minutes of play.

The Huskies then came barging out of the gates into the second half of play at Steph Pettit Stadium as an own goal from a Shippensburg defender just 40 seconds in gave Bloomsburg a 2-1 lead in the beginning of the second frame. The Huskies showed pressure on the Red Raiders side of the field just before the Red Raider defender chipped it over her own goaltender to give Bloomsburg the 2-1 lead.

The Huskies continued to show the pressure on Shippensburg as just 45 seconds later, junior midfielder Maggie McDonald redirected a cross field pass from senior midfielder Megan Callan past the Red Raider goalkeeper to give Bloomsburg a 3-1 lead just under two minutes into the second half of play. The goal was McDonald’s fourth tally thus far this season.

Bloomsburg then rounded out their four goals scored with a strike from junior defenseman Natalie Holmes in the 61-minute preserved the win for the Huskies. Holmes managed to squeak by and find an opening past the Red Raider defense to give her an open shot on goal for her fourth tally of the season.

The Huskies managed to outshoot Shippensburg by a 12-8 margin in the win. Bloomsburg also held a 5-4 margin in corner kicks in the match.

Hawkins managed to push aside three Shippensburg shots in the win to improve her overall record to 11-1 in 2019. She currently leads the PSAC in goals against average (.354) and remains in a tie for second in shutouts with six on the year.

The Huskies now look ahead to a full slate of conference matchups to finish the 2019 regular season. Bloomsburg will welcome Mansfield to Steph Pettit Stadium for another home game on Saturday, October 19 before traveling to newly-added conference member Shepherd University on October 23. Start time against Mansfield is set for 4:40 p.m on Saturday.