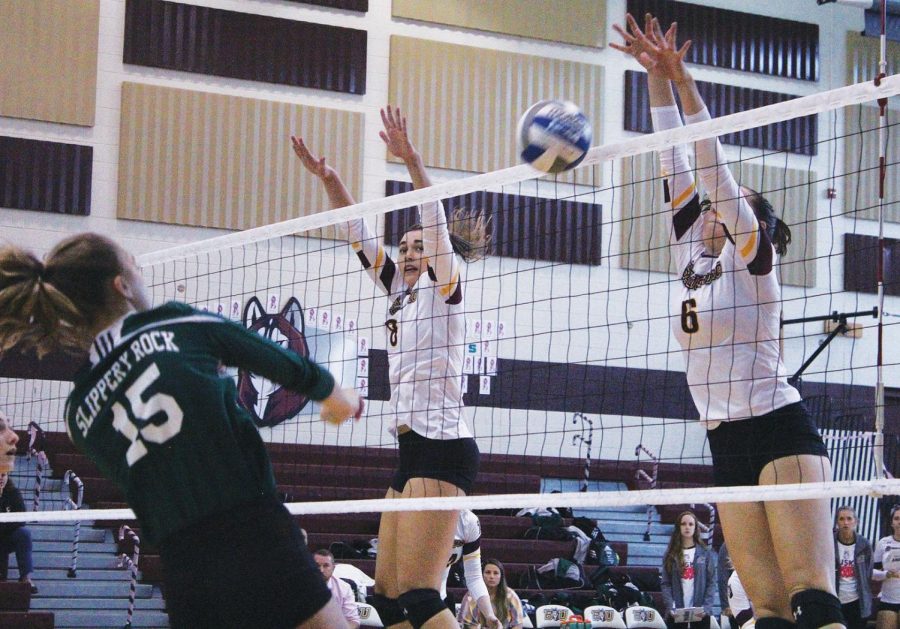 The Huskies now currently sit in second place of the PSAC central division standings behind just ESU after their 3-0 sweep over Lock Haven on Tuesday.

The Bloomsburg University women’s volleyball snapped it’s two-game losing streak this past Tuesday night, when it bested the Lock Haven Bald Eagles in a 3-0 victory. With the win, the Huskies improve to 7-13 overall with a 2-6 mark in Pennsylvania State Athletic Conference (PSAC) play thus far this season. Bloomsburg finished the 2018 season with a 6-22 record.

The Huskies now boast a 3-7 record on the road, and have only played two home games this season, splitting them 1-1. Bloomsburg will finally be back at home this weekend for the first time since Oct. 5, when it welcomes conference opponents Pitt-Johnstown on Friday and Indiana University of Pennsylvania (IUP) on Saturday.

As one could expect, junior Alyssa Cianciulli had another stand out game with 15 kills and a pair of service aces, while the sophomore Mary Kate Mooney lit up the floor and had 11 kills during the match, as well as, nailing a hit at a clip of .300.

Sophomore Sydney Buell contributed to the Husky offense with 10 assists along with a pair of service aces. A notable 12 assists and two service aces were earned from the freshman Brooke Kratzer.

The first set of the match was a tense one, with the Huskies just narrowly beating out the Bald Eagles with a 25-21 win.

In the second set, the Huskies really started to put the pressure on and the Bald Eagle defense could not keep up and fell 25-14. For the third and final set of the match, there was some more fight from the visiting team, but they could not stop the momentum of the Huskies and were defeated 25-19.

It was an impressive performance for the Huskies, no doubt as they were able to hit .198 for their match, along with a .250 in their dominating second set win of 25-14.

This is the second loss the Bald Eagles are suffering to the Huskies. The last matchup between the teams last season, saw a much more narrow victory for the Huskies, as they bested Lock Haven 3-2, once again in Lock Haven. Surely the Bald Eagles are feeling some bad blood for the Huskies. The tension between the teams will likely be palpable when they face off for the second time this season on Tuesday, November 12.

The Huskies now face three upcoming games at home with two being conference matches, if they are able to continue to play at this level, they should have no problem keeping up that win streak.

Their next opponent is the University of Pitt-Johnstown Mountain Cats. A look into the schedule of these Mountain Cats shows a prime target for a Husky victory.

They are another team that the Huskies have a real chance of beating. Playing at home is another added benefit for the Huskies that could give them the edge they need to secure a victory.

The last home game for awhile is against the Susquehanna River Hawks. Being a non-conference meet, this takes the pressure off the Huskies, as the River Hawks are having a very successful season.

The River Hawks boast a 12-game win streak currently, and sport an overall record of 21-3. They will prove to be quite the challenge for the Huskies, but perhaps home-court advantage will work in their favor.

This Friday, October 18 marks the return of the Huskies to the Nelson Field House, where they will battle against the Mountain Cats from Pitt-Johnstown starting at 7:00 p.m.

The weekend does not end there for the Huskies though, as the next day starting at noon, Indiana University of Pennsylvania’s Crimson Hawks will travel to the Nelson Field House for yet another home volleyball match for Bloomsburg. Come out and support the Huskies.

For more information on the Huskies win over Lock Haven, and this weekend’s conference matchups, please visit BUhuskies.com