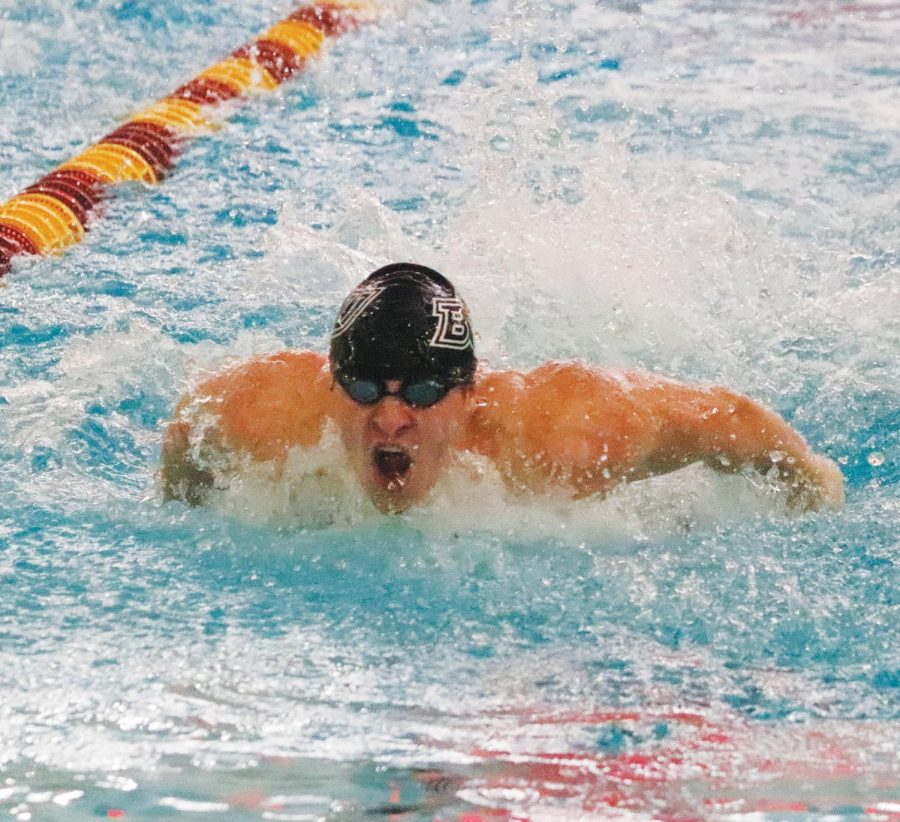 A BU team member swims the breaststroke in the medley portion of the race.

The men and women’s swim teams are preparing for their upcoming meet against Dickinson College this Saturday for a non-conference dual meet. The Bloomsburg men’s team has an overall record of 4-2 and a 3-1 record inside the Pennsylvania State Athletic Conference (PSAC), while the women boast a matching 3-1 conference record and 4-2 overall record. Both teams are hot off a four-meet win streak and are confident after a commanding win against Clarion University at home this past Friday night.

The Huskies were able to come away with a plethora of victories against the Golden Eagles. Another important part of the victory came from the advancement of 15 different swimmers whose efforts combined into 17 PSAC qualifying times for the conference meet in February.

Sophomore Colton Schnars swam the strongest for the Huskies, as the sophomore managed to grab three first-place wins on the night. Schnar won the 100-yard butterfly with a time of 50.75. Along with snagging the first, Schnar’s time was the fourth-fastest swim for the conference.

The 50-yard freestyle provided the opportunity for senior Jordan Wyant to snag the first individual win for the Huskies at a time of 21.96. Redshirt senior Kyle Dix followed with a victory of his own in the 200-yard individual medley, posting up a time of 1:56.76. The Huskies managed to close out the night with a win in the 200-yard freestyle relay. The team of Schnars, freshman Luke Emig, Wyant, and junior Colin Hummel, who touched the wall in 1:25.44.

The men’s team should be able to capitalize on the weakness of the Red Devils and use their sprinters like Schnars and Wyant to overtake Dickinson.

The women’s team shared in the victory against the Golden Eagles and won with an impressive lead of 131.5-73.5. It was the fourth-straight win for the women as well, taking multiple victories across various events. The Huskies were able to hit 13 qualifying times for the upcoming PSAC conference meet later in the season.

Their Red Devil opponents may prove to be more of a challenge for the women than the men. With an overall record of 4-1 and 1-1 within their conference. Dickinson has been hot off a four-meet win streak, and should prove to be a good matchup for the Huskies.

The Huskies will be on the road to Carlisle, Pennsylvania for their next meet this Saturday, November 16; meet time is set for 1 p.m.