Men’s Basketball all over Chestnut Hill 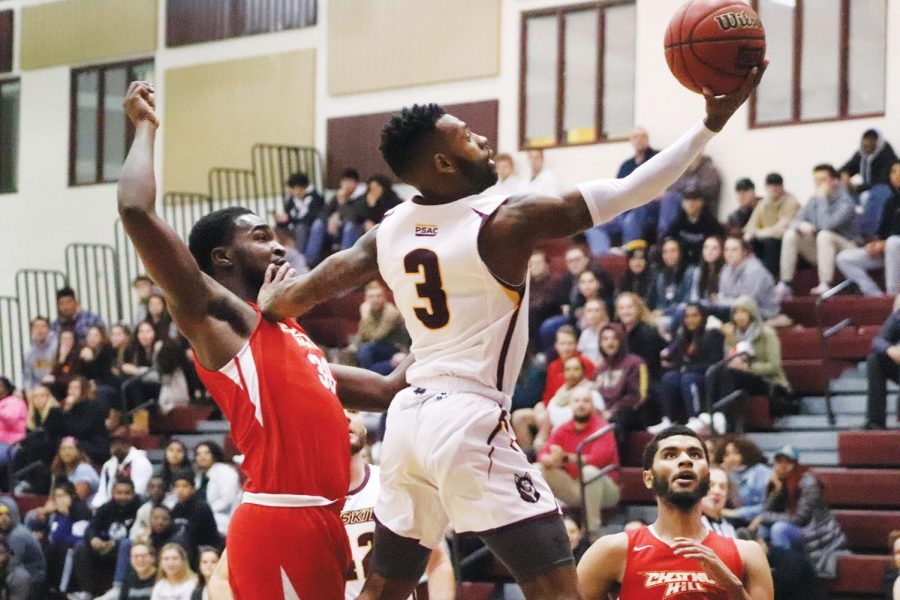 No. 3 Ky Mauras leaps past a Chestnut Hill defender for an open layup.

The Bloomsburg University men’s basketball team found success in their first home game of the 2019-20 season against Chestnut Hill College. It was a great night for the Husky crowd as their men’s basketball team toppled over the Griffins for a 101-88 victory on Tuesday night.
Along with starting off the season 1-0 at home, this game was another first for the Huskies as it was their first game breaking 100 points this season. Their overall record now improves to 2-2 with the Griffins faltering to a losing 0-5 overall record.
In the first half, the Huskies found themselves in a shootout against the Griffins. Both teams found themselves fighting for the early lead but contended well with each other.
Within the first three minutes, the Griffins grabbed a slight 11-6 lead, but the Huskies managed to cut the lead down to one at the 13:48 mark courtesy of junior Maqi Watson. The Huskies were then able to tie the game at 15 and capitalize on a lead from a three-pointer, nailed by junior Peyton Mortellite.
The score remained tight, and the Griffins managed to pull a six-point lead with only 7:31 left in the half. With the Griffin offense pressing aggressively, the Huskies fought to stay in the game, trailing 34-27 at the 4:32 mark.
Momentum started to shift in the Huskies favor though, and the score was yet again tied when senior Ky Mauras scored a layup in the paint off a fastbreak. It was still anyone’s game as both teams battled to take the lead into half.
Mauras was again able to snag another layup and give the Huskies a three-point lead for the half at 42-39. An exciting first half, the score was tied four times in the half.
Barely three minutes into the second half, the Huskies found themselves behind 53-52. A contested layup by sophomore Travis Elmore once again put the Huskies on top 54-53. The offense then capitalized on the gaining momentum and pushed the lead up to five points.
The Griffins continued to fight and again put the game within reach at the 13:29 mark with the score at 61-59. The Huskies would then heat up on offense and go on a 16-7 run to grab the first double-digit lead of the night at 77-66. A three-pointer by Chestnut Hill College left the Huskies only up by eight with only 9:07 left in the game.
Another offense burst would occur for the Huskies though, a 9-4 run would expand the lead to 13 and leave the score at 86-73 with a mere 4:50 left on the clock. While the Griffins hung on as best they could, a second three-pointer by freshman Justin Anderson kept the Huskies up by nine with only 1:03 left in the contest.
The Bloomsburg offense proved to be a powerhouse during the contest with Anderson leading the charge with a season-best 25 points. He shot 9-for-17 and snagged four assists.
Wagner proved to be the perfect sixth man and came off the bench to score 16 points with a pair of assists and a pair of steals. This marks the first season with Bloomsburg for Wagner.
Mauras had an impressive game, posting up 14 second half points along with scoring the final shot of the game. Nine of the 25 bench points for the Huskies were earned by Mortellite and Watson added six points and six rebounds in the contest.
An impressive night of shooting for the Huskies, they shot 38-for-71 from the field and hit 11 of their 24 three-pointers. The Griffins nailed eight of their 21 attempts and shot 31-77 from the field.
Notably, the Huskies handled the ball much better than their opponent and had only four turnovers compared to the Griffins seven. The Huskies were able to use this to their advantage and scored 22 points from turnovers.
This upcoming Saturday marks the beginning of Pennsylvania State Athletic Conference (PSAC) play for the Huskies this season.
The Huskies will be on the road this weekend with their first stop being out west to face Indiana University of Pennsylvania (IUP) on Saturday.
Bloomsburg will then turn around and travel to Chestnut Hill College to play the Griffins on Sunday.
The Huskies do not return home to the Nelson Field house until Dec. 2 when they welcome former conference opponent Cheyney University.
Opening tip on both Saturday and Sunday for the men’s team is set for 3 p.m. against IUP and Chestnut Hill.

For more information on the Huskies home-opening victory over Chestnut Hill, or their road trip this weekend, please visit buhuskies.com