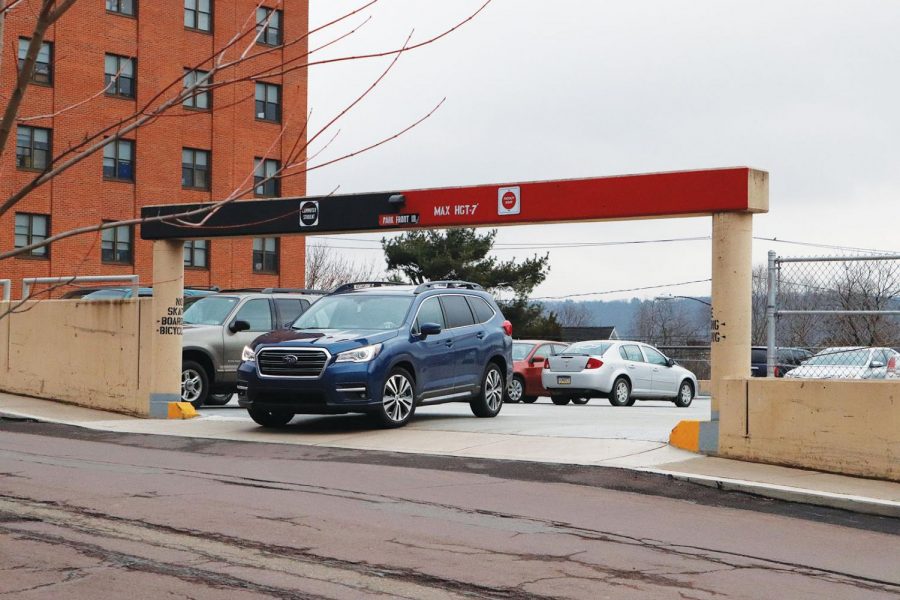 SIte of the hit and run.

A hit and run occurred in the tri-level parking lot across from a residence hall last Sunday afternoon.
Video evidence taken from an Elwell window shows former Bloomsburg University student Elijah Reese striking two people with his car as he attempts to make his get away from the lot.
An unidentified young man, who is believed not to be a university student can be seen standing in front of Reese’s vehicle. This is when Reese slams on the gas hitting both the man and another unidentified female student.
Following the crime, the man can then be seen with his arm in the vehicle window as Reese again begins to hit the gas, dragging the man through the parking lot. Before the former university student is able to get away, the man punctures the vehicle’s tires with an unclear object.
According to Bloomsburg University Director of Media Relations Tom McGuire, this incident took place after Reese was confronted by students following striking another parked vehicle.
“This was a very unfortunate incident,” said McGuire. “But I am happy that both people involved are ok.”
Elijah Reese, 19, from Philadelphia, P.a., withdrew from classes at the university as a Freshman in fall of 2018.
Following the hit and run, Reese turned himself in to the State Police Bloomsburg Barracks Sunday afternoon.
Bloomsburg Police previously arrested Reese in November of 2018 when he attempted to rob Uni-Mart on Lightstreet while wearing an orange pumpkin mask.
As previously reported by The Voice, Reese entered Uni-Mart on Nov. 9, 2018 around 3:30 a.m. and attempted to steal the register from the counter while wearing the Haloween mask. “After a clerk grabbed Reese, the two began to struggle on the floor; the clerk was able to remove Reese’s mask in the midst of the conflict, and police later identified him through surveillance footage.”
District Justice Douglass Brewer has since sent Reese to the Columbia County Prison where his bail is set at 25 thousand dollars.
Reese is charged with two counts each of aggravated assault with a vehicle and recklessly endangering others, as well as a hit-and-run accident involving damage and reckless and careless driving.
The victims who were struck by Reese’s vehicle Sunday afternoon were taken to the local hospital. Both have been released with no serious injuries.