Vaping may increase risk of COVID-19 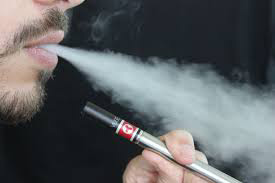 The Center for Disease Control (CDC) is exploring the effects vaping has on one’s susceptibility to the rapidly spreading Coronavirus.

The rise of vaping came a few years ago with the huge spike in popularity of Juul and still has not gone away completely. According to CBS, in 2019 over five million children and teens were actively vaping.

As previously reported by The Voice in ‘Vape Danger Hits Home’ on September 12, 2019, a lung disease related to the use of e-cigarettes caught everyone’s attention. This disease put a Bloomsburg University student in the hospital, among hundreds of others across the country. From this outbreak alone, doctors learned the effects vaping can have on a user’s lungs.

In China, doctors began noticing a trend by looking at earlier data, CBS reported: “Looking at who presented COVID-19, they did find that the severity of the illness seemed to be associated with being a smoker and former smoker. Again, that would suggest the more lung injury you have might affect the disease severity.”

According to The Denver Channel, while vapers and smokers are at greater risk, the risk of developing more severe complications is even greater, comments Dr. David Beuther, Chief Medical Information Officer at National Jewish Health.