The Dose ride crushing waves of grunge with ‘Saline’ 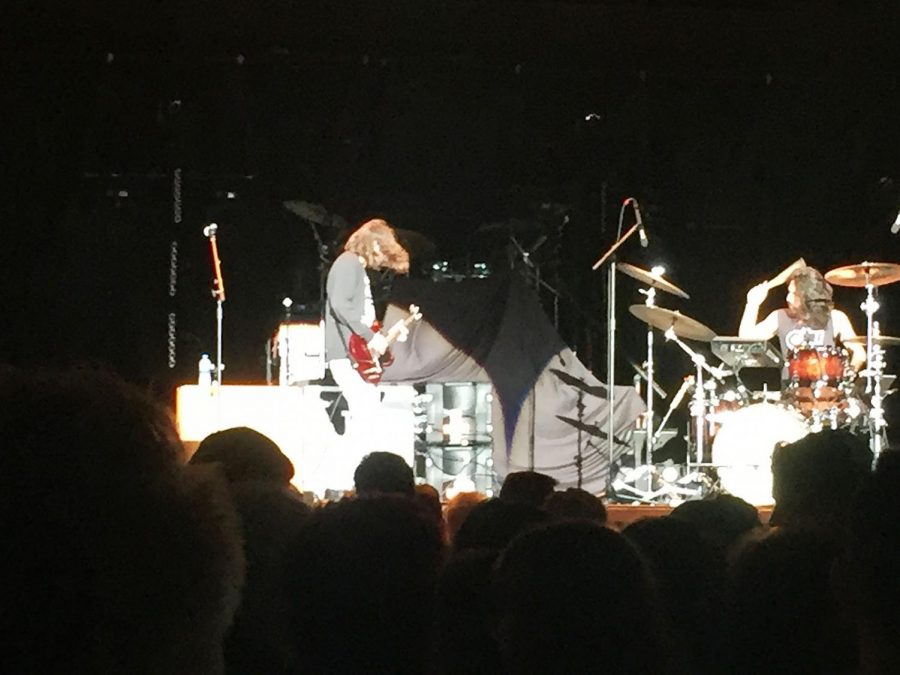 The Dose opened for Daughtry at the Bloomsburg Fair on Sep. 21.

Remember grunge? The gnarly Seattle sound draped in flannel and shredded jeans? Mainstream radio doesn’t, but Indio Downey and Ralph Alexander haven’t forgotten. Together the two SoCal sons are The Dose, a no-bullshit guitar-and-drums duo with a sound big enough to rattle the cheap seats.
Singer and guitarist Downey (son of Robert Jr.) and drummer Alexander don’t care if noise doesn’t sell like it used to. And their resemblance to the grunge gods of the era is uncanny.
Downey’s voice hits somewhere between Cobain and Staley, and Alexander, thrashing on the kit with reckless abandon, evokes the sweaty intensity of 1991 Dave Grohl.
Their debut LP, “Saline,” is a tumultuous dive into light and darkness, packed with raw emotion as palpable as the thunderous riffs and beats that fuel the album.
They eschew any sort of steady buildup with the rapid-fire opener “Vervain,” then head into deeper, darker waters with “Drown.” “Hiss into my ear/All that I dread” Downey wails over Alexander’s drum melee.
With melancholy missives like “Despairadise” and “Gone,” it’s clear The Dose can spin stories of pain and isolation with the best of them.
But it’s not all about rubbing salt in their wounds. “She’s just like a saint/From the ashes/Together we faint/When the black crashes” Downey croons on the anthemic title track, a tribute to the girl who keeps him afloat when life threatens to drag him under.
You’d never guess that the larger-than-life sound of “Escape” emanates from two twenty-something dudes who don’t even have a Wikipedia page yet. The two-piece setup wasn’t a thing until their would-be bass player blew off one of their first shows.
Downey and Alexander soldiered on, with Alexander working bass-synth pedals into his setup to round out The Dose’s pulsating rhythm section. Downey jumps between blistering power-fives and slick metal solos with ease, all the while snarling about shattered dreams and uncertain futures. It’s a sound akin to a roiling ocean storm.
The boys go for broke on “Thrill of It,” where Downey screams into a vacuum as Alexander hammers the kit for all he’s worth. “Help yourself catch a break/There will be an answer” Downey growls before unleashing a manic flurry on his Epiphone, as if he could stop time if he plays loud and fast enough.
It would be a stretch to call “Saline” a new rock and roll touchstone. But there’s no denying The Dose have 90s hard rock in their blood, even plugging some of the greats for the behind-the-scenes work. Ex-Buckcherry axeman Keith Nelson handles production duties and Grammy nominee Joe Baressi mixes the sound to gritty perfection.
The final earth-shattering chords of “Meant to Be,” backed by Cameron Stone’s superb cello work, only serve to hammer the point home: there’s a scrappy new voice in the dwindling world of alt-rock ragers.
If you’re looking for an album that kicks your ass while it schools you on the dichotomy of angels and demons, The Dose will happily supply it.