Cole Swiger: Leader On and Off the Field 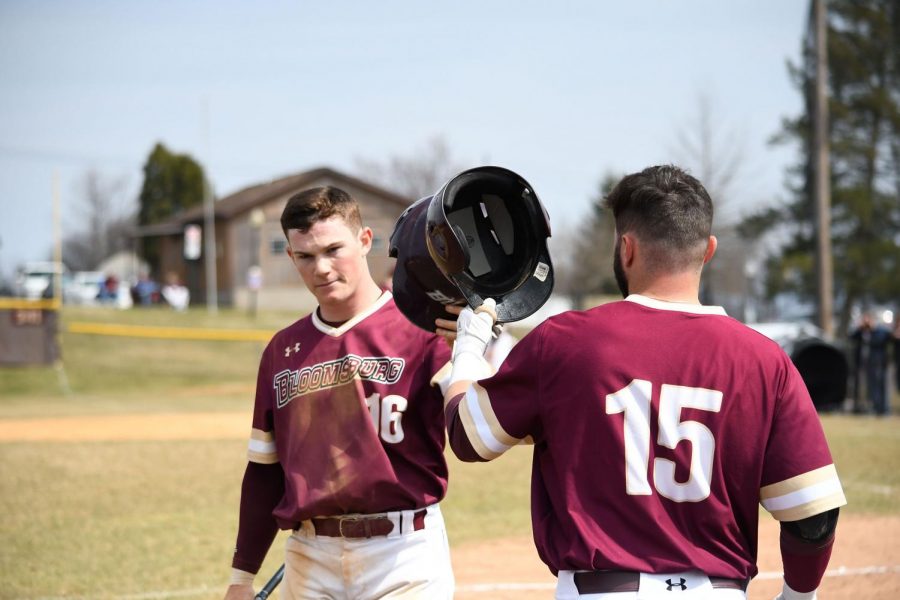 It was Chase Utley, the Philadelphia Phillies second baseman from 2003-2015, who said “I never want to look in the mirror and say, “What if? What if I had run harder? What if I had dived for that groundball?” .
These kinds of inspirational quotes from Phillies’ legend Chase Utley fueled Bloomsburg University men’s baseball right fielder Cole Swiger into pursuing his dream of one day playing in the MLB. Swiger grew-up idolizing Utley for his relentless effort and never-quit attitude.
Swiger stated, “My favorite player growing up was definitely Chase Utley. He just played hard and he put on a great image for the city.” Many kids looked up to him. “He played the game the right way, which was awesome.”
Swiger added, “I grew up a Philadelphia Phillies fan, and watching them win the 2008 World Series definitely was a big inspiration.”
Utley reinvigorated a winning culture in Philadelphia and Swiger is attempting to replicate his childhood idol’s leadership.
He said, “[I] do what I need to do to hopefully inspire young guys coming up or the guys around me.”
Swiger stated, “And to establish a winning tradition by doing my best to set a standard to wanting to win and have that fire inside all of us to go out there and win and go get into the conference playoffs and hopefully win a conference championship.”
Bloomsburg University pitcher Chad Cooperman strongly endorsed Cole’s work ethic and leadership qualities.
Cooperman went on to say, “Cole is really good when it comes to having a strong work ethic, whether it is in the classroom, at the baseball field or in the weight room. He just wants to pull others to come with him. And I have been fortunate enough to be one of those people. He is always pushing to do more in being better at school, better on the field and better in the weight room. And just being a better person overall.”
Cooperman added, “Cole is definitely a servant leader. He is trying to put the team first before himself. He does a good job of displaying what a strong work ethic looks like, what good actions look like on and off the field, which is something that is important for younger kids to look up to. And that is one of the biggest things of a good leader, producing more leaders. If someone follows what he is doing, the Bloomsburg Huskies baseball team is going to be really good in the future.”
Swiger’s hard-work and determination has led his most productive season. Swiger is batting .268 this season. However, playing baseball wasn’t always so easy for the Huskies’ right fielder.
“A serious obstacle I face was getting recruited in high school or being kind of small growing up when I was playing. I was kinda looked down upon by division one schools,” said Swiger.
Nonetheless, Cole found the silver lining in joining a division two program.
He continued, “I came up into the division two level with a chip on my shoulder. I used that as motivation to help me get through it and become a better player for sure.”
When asked about having a certain message to send to schools for overlooking him during the recruitment process, Swiger Responded, “No, I have had a great time here at Bloomsburg, and I’m happy I made the decision to be here.”
Swiger loves competition and striving to reach his goals. However, there is two teams that ignite his passion for the game. Swiger commented, “I would say either West Chester or Millersville because they are always at the top and it’s always a time to prove yourself.”
Bloomsburg will conclude their regular season this weekend against PSAC rival West Chester in a 4-game series beginning Friday afternoon.
“[West Chester] has had our number the last couple years, but we have definitely gave them some good games. This year, we are looking forward to West Chester right now and taking that series from them because that would be a really big step, especially going into the playoffs,” said Swiger.
Bloomsburg is 31-10 this season and have clinched a spot in the upcoming Pennsylvania State Athletic Conference (PSAC) tournament, which starts on May 8 in Johnstown, Pennsylvania.