How one student’s activism caught The New York Times’ attention 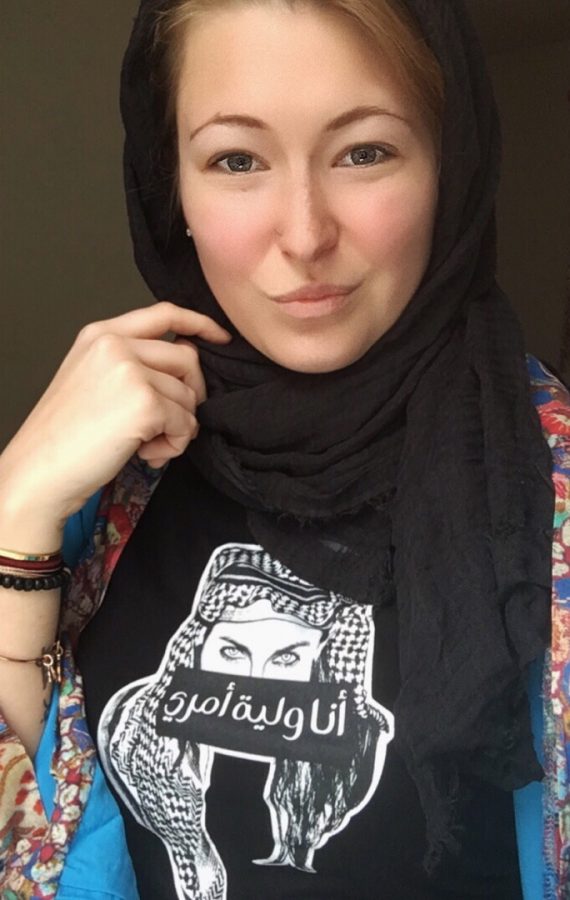 Laura has been using Twitter to criticize Saudi Arabia’s treatment of women. Her shirt reads “I am my own guardian” in Arabic.

Laura Comstock first connected with Maha and Wafa Al-Subaie through Twitter on April 16. Maha and Wafa, sisters from Saudi Arabia, had been hiding since April 1 in the country of Georgia, where the Middle East meets Eastern Europe. They were about to apply for asylum there when the Saudi government canceled their passports.
“I was advocating for these women literally almost every hour on the hour for the first two or three days,” Comstock says. “I reached out to them on Twitter to ask how I could help. Within 24 hours they got back to me, citing that they wanted to transit to another country.”
The Al-Subaie sisters originally fled to Georgia to escape domestic violence at home. Maha was forced to leave her child behind. They were hiding in a safehouse when they realized they would have to apply for asylum. According to Comstock, the girls’ parents informed Saudi Arabian officials about the two runaways, leading to the Saudi government ordering the Georgian government to send them back.
“Obviously, these women did not feel safe enough staying in their own country. They felt like they had to leave and go somewhere else because women aren’t supported by the government.”
Laura is one of Bloomsburg University’s most outspoken advocates for the rights of Muslims and refugees from the Middle East. An Arabic major and a member of the Muslim Student Association, she attends two different Arabic classes every week, often sporting a hat with the message “We Are All Refugees” and a backpack button that reads “Islamophobia is un-American.”
She was sitting in the Andruss Library Starbucks on April 17 when video news publisher NowThis News messaged her on Twitter.
Supervising producer Melissa Fajardo Krasovsky caught word of the Al-Subaie sisters’ situation and asked Comstock if the girls were safe. The sisters had lost access to their Twitter account due to hacking attempts from other Saudi accounts and had not posted anything for close to 12 hours.
“NowThis saw that I was a Student Researcher and wanted to know if I was affiliated with any organization besides that,” Comstock says.
The NowThis journalist asked Laura if she’d be willing to participate in an upcoming documentary about Saudi Arabian and Palestinian citizens. Comstock readily said yes.
But within twenty minutes of her correspondence with NowThis, she had another message in her Twitter inbox. It was a member of The New York Times, asking if the sisters were still alive and whether the girls had been extradited back to Saudi Arabia. “I basically told her the same exact thing and gave her different types of Twitter accounts that were in contact with the girls while they were still trying to manage their Twitter situation,” Comstock says.
The backlash from her Twitter posts hasn’t dissuaded Comstock from drawing attention to the Al-Subaie sisters’ plight, and she’s not shy about criticizing one of the more controversial figureheads of the Middle East. Comstock is quick to point out that while domestic violence is illegal under the policies of Crown Prince Mohammad bin Salman, punishment is not widely enforced. “The mass misinformation the kingdom sends out to all these people makes it really hard for victims to tell their story,” she says.
A few days later, Laura took her social media campaign a step further. “On April 19, I made a video of support, telling the girls there are women who are standing here with you, we will continue to support you,” Comstock says. That video currently sits at just over 10,000 views on Twitter. Her second video post, this one claiming that gender-based apartheid is the status quo in Saudi Arabia, racked up almost twice as many views as the first.
Reactions to the videos have been swift and divided. Nearly all the hundred-plus comments consist of hateful trolling – many are from state-sponsored Saudi Arabian accounts accusing Comstock of being a Qatari agent – but a decent number of them are from Saudi citizens thanking her for speaking out.
“I didn’t expect to make these videos and have them go viral,” she says with a smile. “I’m used to making silly YouTube videos when I was a kid and they’d get like 10 views, and I thought that was an accomplishment.”
Laura plans on continuing her activism after graduation and staying in touch with NowThis and The New York Times to keep them updated on Maha and Wafa’s situation. “One thing these Internet trolls keep saying is that I’m in it for the views or the notability,” she says. “I’m not. I’m coming at it as a sexual assault survivor and saying that women need to have their rights recognized globally.”