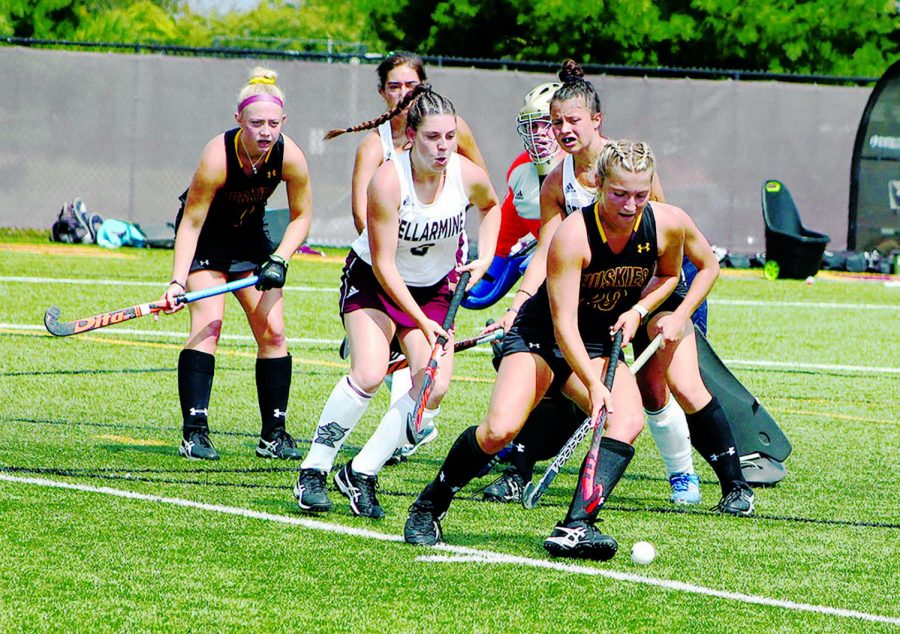 The Bloomsburg University field hockey team is now 0-2 after two opening losses to start the 2019 season.

Heading into Wednesday night’s non-conference matchup against the number-two ranked West Chester Golden Rams, the Huskies field hockey team looked to bounce back from a season opening 2-1 overtime loss to Bellarmine University.
Heading into the year, the Huskies boasted a number nine ranking in the Penn Mon-to/National Field Hockey Coaches Association (NFHCA) preseason poll. Nevertheless, a top ten ranking, 26-8 advantage in shots and 22-8 margin in penalty corners wasn’t enough to propel the Huskies to victory in their opening game. The only goal for the Huskies came off the stick of Sophomore Foto Tsioles, being assisted by senior Rachael Strockbine early on in the fourth quarter. Even in defeat the Huskies battled heartily. Despite giving up the game winning goal, Junior goalkeeper Hannah Barnard put on a solid performance getting credited with five saves at the conclusion of the game.
Heading into the matchup, the Golden Rams held the all-time series advantage against Bloom at 11-4. Having won the previous nine straight meetings since Oct. 6 2012, including last year’s 4-0 victory, West Chester looked to continue that dominance heading into last night’s matchup.
Unfortunately for our Huskies, the dominance continued. Tallying a 5-1 victory, the Golden Rams maintained a lead throughout the entire game. Initially, the Huskies held their own throughout most of the first period not allowing a goal until minute 11:03 of the 15-minute quarter. Even through the second quarter, the Huskies only allowed one more goal, having a manageable 2-0 deficit going into the half.
However, West Chester held onto their first-half momentum coming out on fire scoring two goals in the first 10 minutes of the second half. With the goals coming less than a minute apart, Bloom saw the Golden Rams’ lead double within the blink of an eye.
Our Huskies’ effort never wavered, however. Shutting out WCU throughout the rest of the quarter while even adding a goal of their own in minute 9:51 from Freshman Meghan Longengahen.
Any dream of a Huskies comeback flatlined in the beginning five minutes of the fourth quarter, when the Golden Rams added their fifth and final goal of the game.
Albeit the final score being slightly lopsided, the Huskies definitely didn’t make it easy on WCU and performed valiantly against one of the top teams in the nation.
There won’t be much time to dwell on this performance for the Huskies, as they turn around this Saturday and travel down I-80 west to take on the undefeated Crimson Hawks of IUP.
Having started their season 2-0, with a 5-1 victory on Sept.7 over Frostburg State and a 1-0 victory last night over Mansfield, no doubt IUP has built some momentum going into their matchup with the huskies.
Even with their early season success, historically the Huskies shouldn’t have much to worry about against. Posting an all-time record of 48-9-1, including victories in their last five matchups; this seems like the perfect opportunity for the huskies to get back on track and capture their first win of the 2019 season.