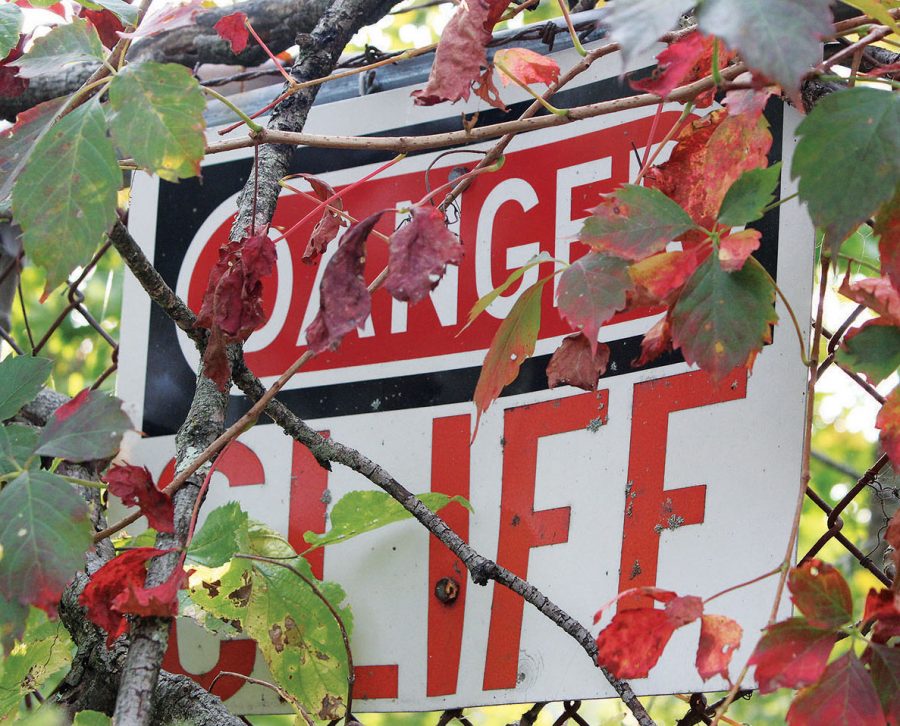 Danger Cliff” sign is located near Fishing creek where Justin King , a first year student at Bloomsburg, was found deceased on the morning of Sept. 14.

Early Saturday morning, an individual along the Bloomsburg walking trail found the body of 18-year-old Bloomsburg University freshman Justin King, who is believed to have fallen from a steep 70 to 80 foot-cliff near the Crag Mansion.
Authorities are still investigating why King was walking near the ledge and how exactly he fell, though the fall appears to have been accidental.
King, a graduate from Boyertown Area Senior High School, came to Bloomsburg from his home in Gilbertsville to study business administration.
According to Columbia County Coroner Jeremy Reese, an autopsy performed on Monday determined that King sustained head injuries from his fall.
This is not the first time that a similar instance happened in the area near the Crag Mansion, as students have previously died as a result of falls from the cliff in 1997 and 2003.
Located on West First Street, the house previously belonged to Delta Pi from 1976-1999; the group allegedly lost ownership of the property due to the number of students at risk of getting hurt on the cliff.
BU’s Director of Media Relations and Content Strategy Tom McGuire said in a statement: “We are saddened by the tragic death of BU student Justin King. Our deepest sympathies go out to Justin’s family and friends, and we ask everyone to keep them in their thoughts.”
Additionally, Vice President for Student Affairs Dr. Dione D. Somerville said in an email on Monday: “Our campus mourns the loss of first year student Justin King of Gilbertsville, PA. Justin passed on Saturday, September 14, near the Fishing Creek in the Town of Bloomsburg. Our condolences go out to his family during this time. As a university community, please keep Justin’s family and friends in your thoughts.”

A GoFundMe page has been created in order to help Justin’s family cover the expenses of his funeral; the page can be found at https://www.gofundme.com/f/funeral-for-justin-king?utm_source=facebook&utm_medium=social&utm_campaign=p_cp+share-sheet&fbclid=IwAR2WCeOaxVK8omm2FTbkIbBlkdq1qPw5V_6ZCMGrLJk6fAErvD2aQY0Yb30

Bloomsburg University offers resources to students in need of counseling while processing grief. Visit the Center for Counseling and Human Development (located in SSC 240) or visit their page on the BU website for more information on the counseling services they provide.