Mission: Save the kittens 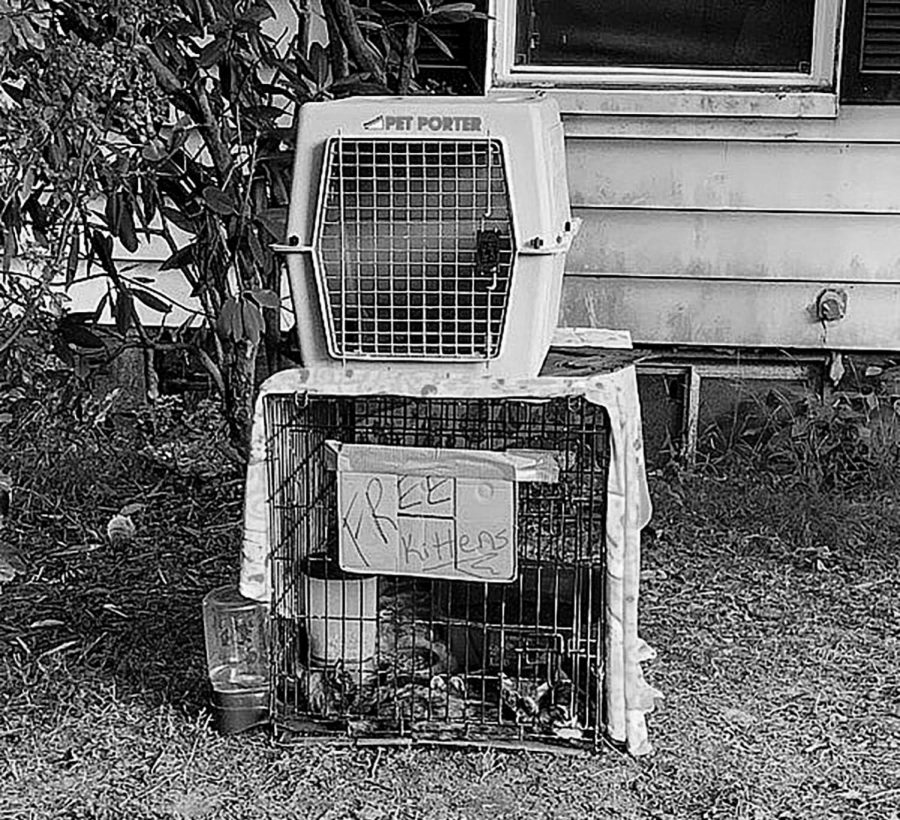 Students found a group of young kittens in this crate on Main Street this past weekend.

The town of Bloomsburg, Pennsylvania is no stranger to animal cruelty. Five students learned that the hard way this past weekend when they embarked on their own rescue mission to save a group of furry friends.
Senior Michelle Azgirey, a 21-year-old Business Management major from Bucks County, was the first person to come across the caged kittens on Sunday, Sept. 22.
“I heard a cry for help from what sounded like a kitten. I looked to my left and saw two crates filled with them just sitting in front of a house. The resident of the house was sitting right inside with the window open. He made me feel hesitant to approach the kittens,” said Azgirey, who was walking down Main Street on her way to the Bloomsburg Fair at the time of the incident.
Inside of the top crate, separated from the rest, was an orange kitten. The bottom crate held seven other kittens and three adult cats. The bottom crate also had a little bit of water and some food whereas the top crate did not have any at all.
Azgirey, who cannot have animals in her residence, shared the situation with her sorority sisters, three of whom hopped in a car and drove over to the scene to pick up the kittens and rescue them from the heat. That day, the temperature had risen to a high of 86 degrees.
Junior Kali Morgia, a 20-year-old Mass Communications and Theatre Arts double major from Bloomsburg, was among the three women who aided in saving the kittens.
“We were trying to figure out the best way to move the cats when the resident of the home came outside and explained to us how they were his son’s kittens. He went on to explain how the kittens had been put outside that morning and were six weeks old,” said Morgia.
To Morgia, the man looked to be in his mid-50s and was distinctly Caucasian. His wife, who had followed him outside, looked to be a similar age and was also Caucasian.
It was hard for Morgia and her friends to believe what the man was telling them. To them, the kittens looked much younger than six weeks old and it seemed as if they had been neglected for a while, not just for one day as the man had claimed.
When asked, the man was not ready to give up the adult cats just yet but was willing to hand over the eight kittens. After helping to unload the adult cats, the women carried the two crates to their car.
Before driving away, the women tried calling animal control but, because it was so late in the day, there was no answer. Also, rather than drive the kittens to the Society for the Prevention of Cruelty to Animals, the women decided to take them to the safety of their own home where they used a special comb to check the them for fleas.
“We took them home because if we were to have dropped them off at the SPCA they would have charged us 50 dollars for each animal drop-off. With there being eight kittens, that would have added up to 400 dollars or more which is something none of us can afford,” said Morgia.
After combing through the kittens’ fur, the women discovered that not just a few, but rather, all of them were flea-ridden.
“Some even had upper respiratory infections and gunky eyes. It’s really sad because they’re just so little and I hated seeing how they were mistreated and neglected. The owner didn’t even bother to take care of them; their condition makes that pretty clear,” said senior Alicia Rohrer, a 21-year-old Special Education and Early Childhood double major from Bloomsburg.
Once the kittens were washed clean and taken care of, the women took matters in their own hands. They began to call up friends and post about the situation on social media in an attempt to garner more help.
“We posted on Facebook, Snapchat and Instagram and, since Sunday, we have found loving homes for each and every one of the kittens,” said Morgia.
The women hated to see how the kittens were treated by the owners but, after learning about the SPCA’s 50 dollar fee, understood why the man and his wife may have chosen to go about the situation.
“SPCA’s fee is definitely a deterrent. The owners of the kittens, like us, probably figured that they couldn’t afford to leave the kittens in good hands so, instead, they left them outside of their house in hopes that someone would walk by and ask to pick up the kittens as we had done,” said Azgirey.
Essentially, Azgirey suggested that while what they did to the kittens was clearly wrong, it may have been the family’s only option at the time.
The owner also feared that the SPCA would not bother to take care of the kittens and would choose to put them down. However, whether or not the man truly believed this, the women were not sure.
Animal cruelty and neglect is not a rare occurrence. It happens on a daily basis and right in our own backyards. While we are not yet at a point where animal cruelty is continuously reported and punished, we can do our part to help it from escalating just as Azgirey, Morgia, Rohrer and the rest of the women had done over the past few days.
Thanks to the efforts of five students, a few furry lives were saved. Thanks to their efforts, another case of animal cruelty was stopped.