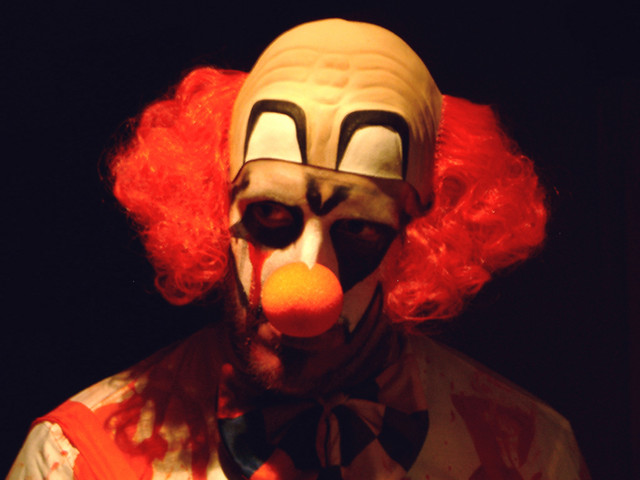 We cover some odd movies here at Cine-Men. From cult classics to total flops, we try to find anything the average reader might not have heard about or has forgotten about over time. This is one of the weird ones, with a title that will definitely draw the eye. We are talking about Killer Klowns from Outer Space.

The movie wears its plot on its sleeve. It’s about a group of murderous alien’s names “Klowns”, that coincidentally look and feature attributes similar to that of clowns albeit through a nightmare induced lens. These clowns come to Earth for one purpose, to find sustenance. Which they do by terrorizing a small town’s inhabitants with various cartoonish weaponry resembling common gags and tricks of normal clowns. And the Klowns find their meals in turning the townspeople into cotton candy cocoons. Yes, it is that silly. These menacing foes are eventually thwarted by a small group of hero’s so well written and characterized that I cannot remember any of their names.

At the time of this film’s release it was met with middling reviews, cementing its place as a cult classic. And I generally agree with the large group of other reviewers when I say its not bad. I most certainly is silly and the film does not intend to tell you it’s not (Especially with a title like that). The plot is nothing to write home about, standard small-time alien invasion plot covered in many more movie. And it follows the same notes as others. No one believes the initial witnesses of the aliens landing. Aliens proceed to kill half the town, witnesses get an I told you so moment. And then proceed to kill the aliens in an obvious and thematic way. This time it happens to be the “Klowns” weakness is their big red nose because of course it is.

But it’s the aliens themselves, like the title itself, that draw the eye. The suits and effects put on display for them are very well done for such a movie that is easily written off. And their dastardly weaponry is both very creative and actually funny in some instances, very different from their Earth counterparts. And looking back it seems that the methods and weapons these aliens use are featured a lot more prominently than other alien invasion movies. You might get one scene where a hapless farmer is disintegrated to show the viewer how serious the threat is. But this happens every 10 minutes with various degrees of silliness.

Which is meant to be the very heart of this film. It is silly, absolutely unadulteratedly silly. If you take it seriously you are only missing the point. You are meant to laugh and wonder what the next stupid character is going to say to the scary looking clown to get themselves killed. Turn your brain off, (or get drunk your choice) and watch this with some friends. Because strangely I find the Klowns funnier than actual clowns.