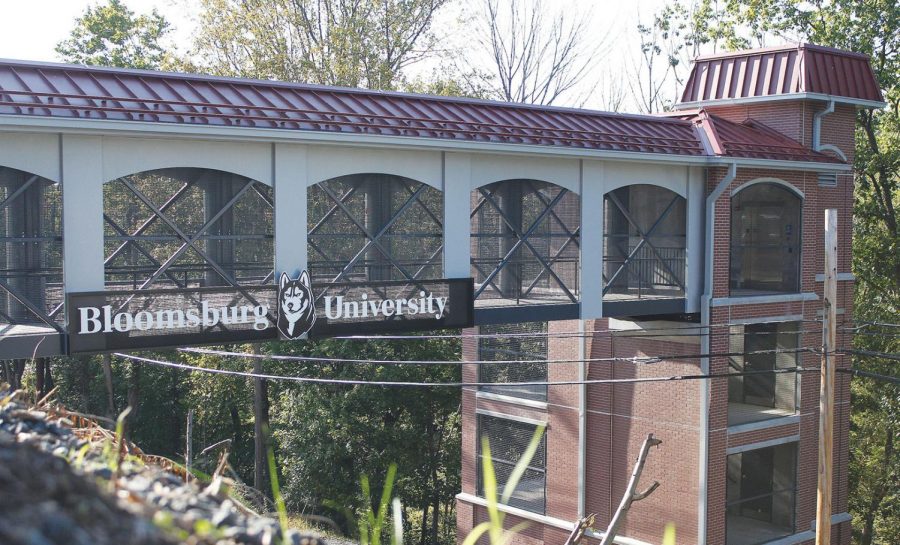 The new skybridge over Lightstreet road.

After ten years of planning, four years of construction and $2.5 million dollars spent, the new skybridge crossing over Lightstreet road is finally open.
The project, which originally wanted to limit foot traffic of students coming from Honeysuckle Apartments to campus, had faced a number of challenges before opening early last week.
Late last semester, Lightstreet road had closed just after finals had ended. After coming back for the summer, students living in Honeysuckle and Greystone Apartments expected the new bridge to be open to walk on. Daniel McTear, a Greystone resident, said: “I don’t know why it’s not open yet, I heard something about it not passing inspection.”
However, Thomas McGuire, Director of Media Relations and Content Strategy, says that the rumor of the bridge not passing inspection is untrue.
“The bridge did pass inspection…inspectors come when they want to come, so it was basically waiting for the PennDOT inspectors [to approve it],” explained McGuire.
Still, the question of why it took so long to install was still a mystery to most. McGuire later mentioned that upon starting construction on the bridge, PennDOT found something unexpected.
Eric Ness, the Assistant Vice President of Facilities Management, said that “initially it was a standard perimeter spread footing with slab on top. Because stable soil was not at the required foundation level originally planned, the foundation type was changed to micro-piles with a slab on top.”
Essentially, this means the original idea for the skybridge had to be modified in order to fit the foundation of the land the bridge was being built on.
Finally, after years of anticipation, the skybridge is open to walk on. Unlike the catwalk stemming from campus to the hospital lot, the skybridge has stairs and an elevator that many students can use on their way to campus.