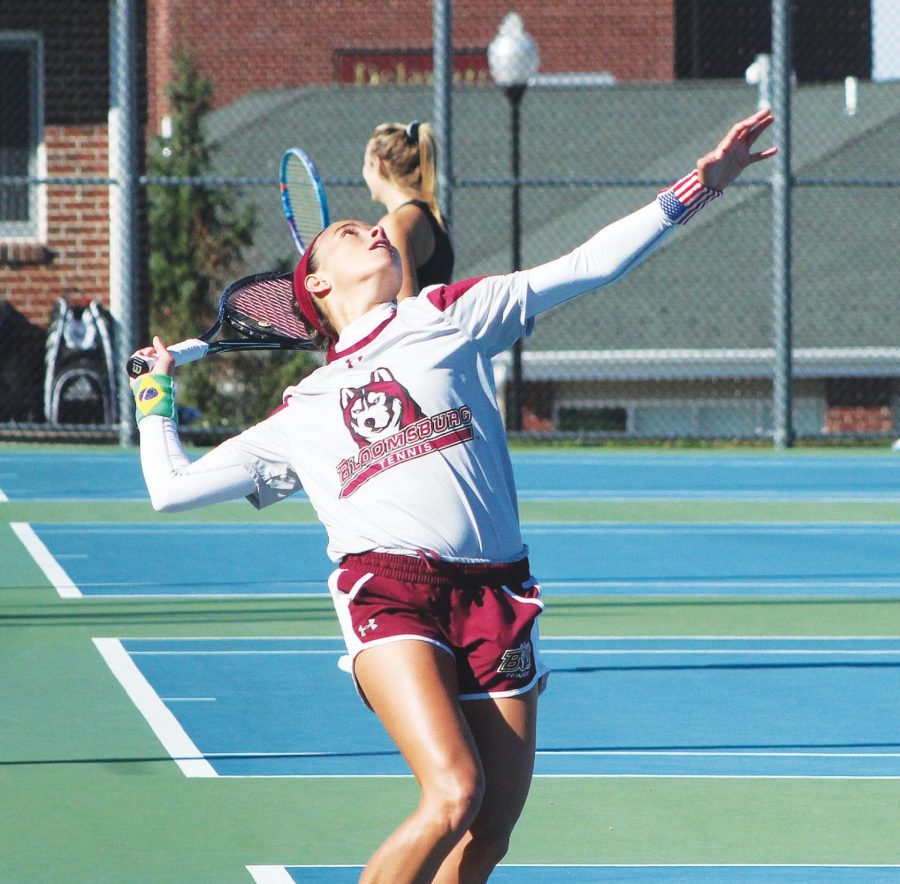 The women’s tennis team will play again at home this Friday against Clarion University.

This past weekend, the Bloomsburg Huskies men’s and women’s tennis teams welcomed universities from all across the state to a tournament at Burt Reese Tennis Center.
Before going into the tournament, the Bloomsburg Huskies and Edinboro Fighting Scots (men’s teams) were tied for second in singles with three, coming up just short of the Mercyhurst Lakers who have claimed three doubles titles.
Additionally, last week the Huskies fell to the Chestnut Hill Griffins in the opening round of the fall season. With this knowledge, the Huskies looked to surpass their loss last weekend and achieved success.
Initiating the tournament on the men’s side, juniors Nagid Walle and Robin Luetzig took to the courts vs. Kutztown’s Josh Karl and Renato Santos. They landed with a triumphant 9-7 victory over the Bears and progressed on to play front runners Cormac McCooey and Unai Gonzalez of Mercyhurst in the second round.
Impressively, Walle and Luetzig outplayed the Lakers by a score of 8-4 and went on to compete in the final championship round. Upsettingly, Ting Hao-Hsu and Nils Plutat of Edinboro defeated the Huskies 8-1.
Despite their loss in the final round, Walle and Leutzig left Saturday’s competition feeling accomplished as runners up in the Men’s Tennis Doubles Championship.
As for singles, both Walle and sophomore Oliver Wiesemann were denied from additional encounters after opening-round stumbles. In the first two sets Walle and McCooey split each winning one match with scores of 6-3 (McCooey) and 6-1 (Walle).
Incidentally, McCooey prevailed and took the win over Walle in the final set by a score of 10-6. However, this victory run would not last long. In back to back sets, McCooey fell to Frank Yanni of Millersville, losing – 6-1, 6-4.
On a more positive note, Head coach Rebecca Helt reminisced on Walle and Luetzig’s championship round, saying, “We just need to work on finishing those big points.”
Surely with more practice and perseverance, the Huskies will soon come out on top.
On the women’s side, day one was a hit for the Huskies at the 2019 Pennsylvania State Athletic Conference (PSAC) Women’s Tennis Singles Championships, as seniors Taylor Capoferri and Cassidy Calimer advanced to the quarterfinals.
Capoferri efficiently shutout Ally Frushour of Shepherd, winning – 6-0, 6-0 in consecutive sets. Simultaneously, Edinboro’s Torye Calleja was taken down by Calimer with a 6-1, 6-3 outcome. In the doubles round, Calimer and senior Vitoria Nery lost to Edinboro by a final score of 8-6, falling short of the doubles championship bracket.
On Sunday afternoon, both Capoferri and Calimer were eliminated in round 16 of the (PSAC) Singles Championships, losing by scores of – 6-1, 6-3 and 6-2, 6-1, to Slippery Rock’s Lacey Cohen and Lois Page.
The women’s next appearance is on Friday, Oct. 11 at 4 p.m. against Clarion at home. The men will also scrimmage on Friday vs. Mount St. Mary’s before taking on the final match of the fall season on Saturday, Oct. 19 against Davis & Elkins at 10 a.m.