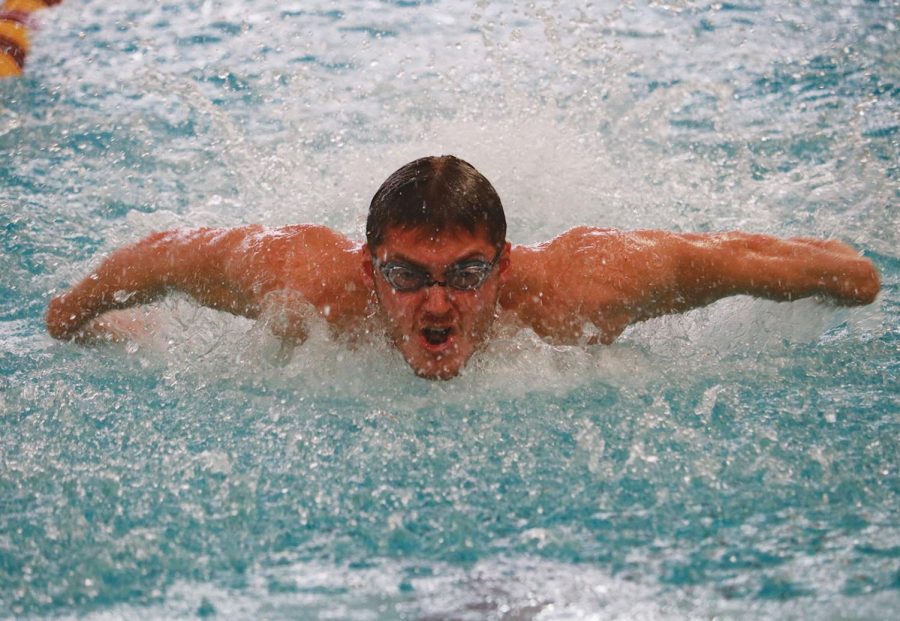 The men’s team finished second in all four days of the PSAC Championships last year.

Bloomsburg University men’s and women’s swimming are kicking off the beginning of their season on Friday, Oct. 18 against West Chester University and Lehigh University.

The men have recently selected their captains for the 2019-20 season. Selected was senior Kyle Dix, who was a team captain last year and has a long list of achievements for the 2018-19 season.

Some of those achievements being the BU Danny Litwhiler underclass athlete of the year, BU swimmer of the year, and a three-time PSAC champion in the 100 fly, 100 breast and 400 free relays.

The second captain selected was redshirt junior Matt Rocchi. Rocchi also has a list of achievements under his name for the 2018-19 season including three BU all-time top ten performances among others.

The last captain that was chosen was junior Noah Cancro. Among Cancro’s achievements is the BU scholar athlete award, BU dean’s list award and the BU GPA award.

These three men are demonstrating hard work not only in athletics but also in education. These captains are going to be good influences for the eleven new recruits that the men have included on their team for this upcoming season.

Not only do the men have some new talent to look after this season, but the women’s swimming team does as well.

The Bloomsburg Women’s Swim Team is looking to make a statement this Friday with their six new recruits. Back in August, coaches Stu Marvin and Bridget Hilferty declared six new members of the team, making up for the five senior graduates in 2019.

Trying to replace these graduates will be difficult in the 2019-2020 season, as they were experienced leaders in the Pennsylvania State Athletic Conference (PSAC) with a total of 267 points. However, head coach Marvin believes in his team, stating: “It will be a tall order, but we feel this group has the potential of giving us exactly what we need.”

Just a year ago, Bloomsburg lost a dual meet and finished third overall at the PSAC Championship, placing in the top three for the sixth consecutive season.

Apart from this, the Huskies new captains were announced for the 2019-2020 season, as seniors Becca Cubbler and Kiera Wadsworth were chosen, along with junior Lindsay Mooney.

As the Huskies top freestyler, Cubbler was the 2019 Bloomsburg University Women’s Swimmer of the Year, and has seen three trips to the NCAA championships.

On the other hand, Wadsworth is Bloomsburg’s top backstroke, and is presently ranked on the program’s all-time top ten list in six events.

In regard to the junior captain, Mooney is very experienced and passionate for the sport that will strengthen her potential to lead the Huskies this season.

Looking to start the season off, Bloomsburg is looking to work harder than ever against the Golden Rams and Mountain Hawks this Friday. The meets for both teams have been scheduled for 5:00 p.m.