PREVIEW: Football back on the road at ESU

Huskies look to snap four-game skid with win over Warriors 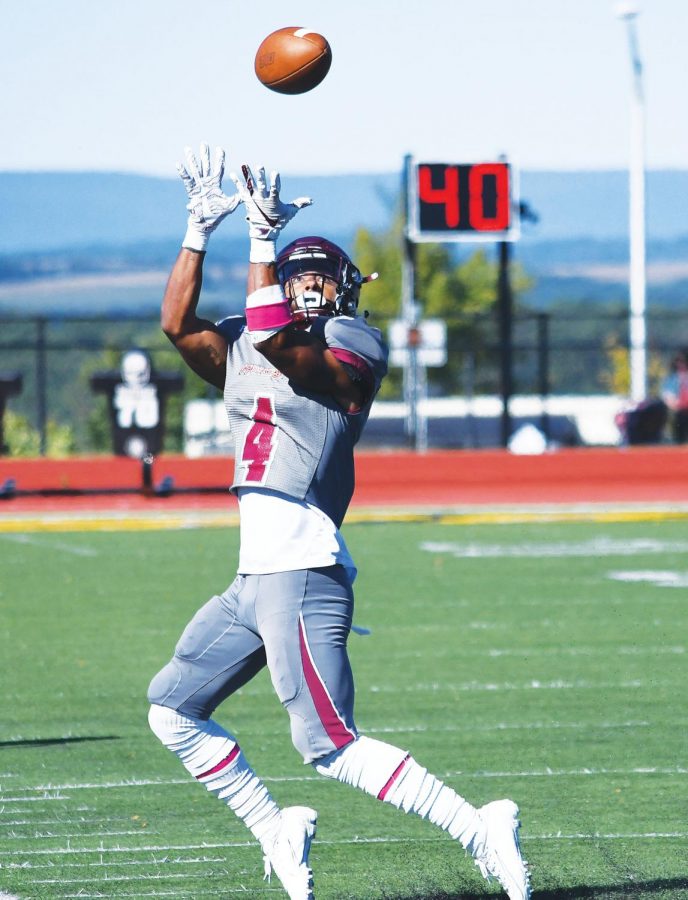 Senior receiver Michael Allen (above) leads the Huskies in both receptions and receiving yards.

The Bloomsburg University football team will look to snap a four game losing streak when they travel to Pennsylvania State Athletic Conference for East Stroudsburg University this Saturday, Oct. 19.

Bloomsburg now holds a 1-5 record on the season with a 0-3 mark in divisional play.

The improbable almost became reality for the Huskies last Saturday, as their upset attempt over conference rival and number 12 ranked West Chester fell heartbreakingly short at 20-17.

Both defenses came out strong rendering the game scoreless through the first quarter. Finally, at the 6:59 mark of the second quarter, the Huskies drew first blood. Right on the edge of the red zone, freshman quarterback Logan Leiby channeled his inner Lamar Jackson and scrambled for a 12-yard touchdown run to culminate the nine-play, 67-yard scoring drive that elapsed 5:21 from the clock.

It seemed BU’s scoring drive shocked some life back into West Chester’s offense, as they marched down the field right to pay dirt as Elijah Hall brought in a six-yard touchdown pass from Mike Piperno. A miss from West Chester’s kicker Andrew Chegia, however, gave the Huskies a 7-6 advantage heading into the locker rooms.

After playing extraordinarily well in the first half, BU’s defense cracked slightly to open the half by allowing an 80-yard touchdown reception from Piperno to Seth Degree. After the extra point was booted through, the Golden Rams took their first lead of the game at 13-7 with 11:32 remaining in the third.

Taking the field for their first second-half possession, the Husky offense responded with another long clock-chewing drive. Moving the ball 64 yards on nine plays, the offense sputtered at West Chester’s eight-yard line, resulting in them settling for a 25-yard field goal by freshman kicker Cameron Schollenberger. Cutting the score to 13-10 with 6:48 left in the third quarter.

Then right as it seemed West Chester was going to complete their second straight touchdown scoring drive, BU’s secondary had other ideas, as redshirt freshman defensive back Cameron Young intercepted Piperno in the endzone to swing the momentum back in Bloomsburg’s favor.

Unfortunately, the offense couldn’t take advantage of the momentum shift going three and out.

Now with the ball back, West Chester didn’t miss out on their opportunity this time as Piperno tossed his second straight long TD pass on BU’s defense.

This time a 40-yard streak down the right sideline to Dan Neuhaus increased West Chester’s lead to 20-10 after the extra point with 54 seconds left in the third quarter.

Sophomore running back Khalil Nelson put the cherry on top of the drive with a five-yard run to the crib to cut the Husky deficit back to three with 9:10 remaining in the game after Schollenberger banged the extra point through the uprights.

Once again, our defense made plays late, halting West Chester’s offense and giving our offense the ball back with 2:14 left in the game. Starting at their own nine-yard line, the offense marched for three consecutive first downs to bring the ball to their own 44-yard line before West Chester signaled for a timeout with 38 seconds left in regulation.

After an offensive holding penalty and defensive pass interference, the Huskies were set with the ball on their own 49 yard-line.

Leiby fired an incomplete pass the next play but still left time for one play, and sadly for BU, West Chester showed why they’re ranked 12thin the country when Jackson Taylor strip-sacked Leiby allowing the Golden Rams to recover as time expired.

As much as this loss hurts, stepping back, the Bloomsburg’s Football Team has a lot to be proud of from this effort. They totaled their highest offensive output yards wise with 294, earned a season-high 20 first downs, and also finished with a season-high 161 yards on the ground.

That top-notch play will need to continue for the Huskies as they travel for another tough road test against PSAC rival East Stroudsburg University (ESU).

Sitting at 5-1 overall and 2-1 in the PSAC, ESU averages an impressive 35.8 points per game while only giving up 17 points to their opponents. ESU’s offense is led by redshirt sophomore quarterback Jake Cirillo who’s totaled 1,350 pass yards, 12 TD’s, 5 picks, and 65.9 percent completion percentage, and shows some dual threat ability averging 59.17 rush yards per game with three touchdowns.

Also on the ground, the Warriors lean on redshirt junior Devante Robinson who’s emassed eight touchdowns and an average of 48 rush yards per game this season.

Our Huskies will look to break their four-game losing streak and spoil the Warriors homecoming game when they take the field at 2:05 p.m. this Saturday, Oct. 19.