There should be a guide for this series 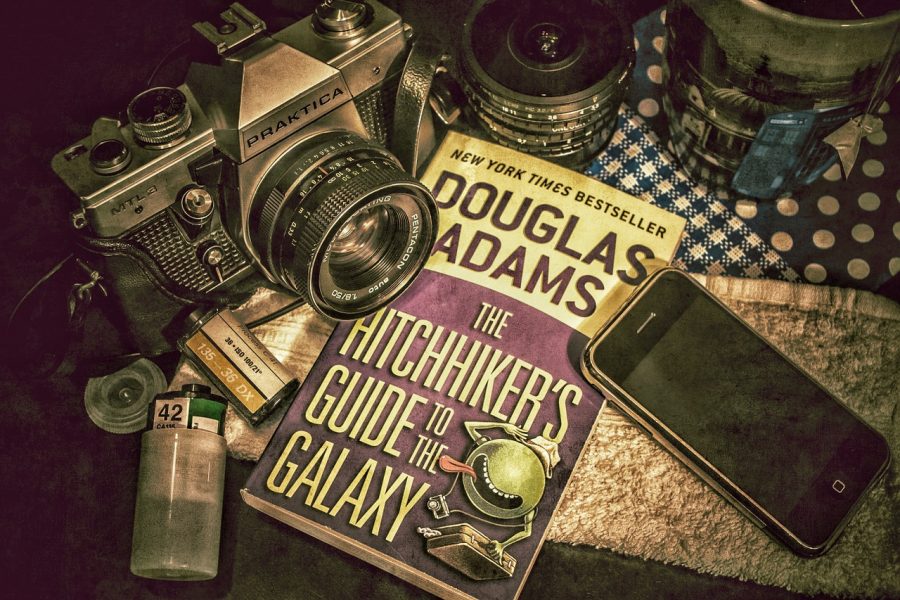 Strap in folks because we here at Cine-Men have brought quite a unique work to the table today. An honestly quite weird piece of media in form of plot, theme, and lineage. We are talking about the British mecca of nerdom, “Hitchhiker’s Guide to the Galaxy.”

This show and in fact the entire Hitchhikers brand has a very strange pedigree. As stated, this particular article is based off of the T.V. miniseries that originally aired on BBC, which in itself was based off content featured in the original radio show, stage show, record, and novels. After the release of the miniseries, the brand went on to inspire more radio shows, novels, and feature length movie.  All of which contain minor revisions and references to each other. Making it so if you were to plot out the entire Hitchhikers brand it would require quite an extensive flowchart.

Hitchhiker’s tells the story of Arthur Dent. A hapless Englishmen who happens to be the last surviving human after the Earth was suddenly destroyed for intergalactic business purposes. Dent was saved from the Earth’s destruction by Ford Prefect, an alien writer for the intergalactic travel guide “The Hitchhiker’s Guide to the Galaxy”. It is with this rescue that Dent and Prefect begin their wacky and zany adventure amongst the cosmos where they learn more about life and the universe. Such as how to travel with the power of infinity, how a towel is one of the most important pieces of space travel equipment, the answer to the “Ultimate Question of Life, the Universe, and Everything”, and how lab mice where secretly Earth’s overlords the entire time.

Due to the nature of how Hitchhiker’s is structured narratively, T.V. executives thought it to be “unfilmable”. However, Alan J. Bell, who both directed and produced the work, went on to win a Royal Television Society Award for most original program of 1981 and many other British Academy Television Awards.

To start simply, Hitchhikers is very silly in every sense of the word and it revels in it. But in this silliness, there are nuggets of meaningfulness that shine through. Such as the inherent backward nature of bureaucracy, commentary on the wealthy, and critique of large-scale business practices, among others.

But it keeps coming back to one main topic. How humans natural try to categorize, classify, file away everything. Which as any magician can tell you, generally takes the fun out of things. We seek to explain all that we all that we see and ruin the magic of ignorance.

The title of this work references this directly, a guide to explain everything there is in the galaxy to the common man. Well that just ruins the adventurous exploratory nature of space doesn’t it? What if you don’t want to know? What if you want to have fun finding things out yourself, or even enjoying your quite ignorance? So don’t give in to the system. Laugh at it, have fun, do something silly you and your friends can laugh at, and giggle at all the inside jokes.

And in the same vein don’t take this work seriously, don’t look for answers where you will get none. Put your hands in the air and enjoy the ride across the universe. Laugh at the funny names and goofy imagery and generally have a good time. Cause you know it pisses of someone in an expensive suit who takes their job way too seriously.