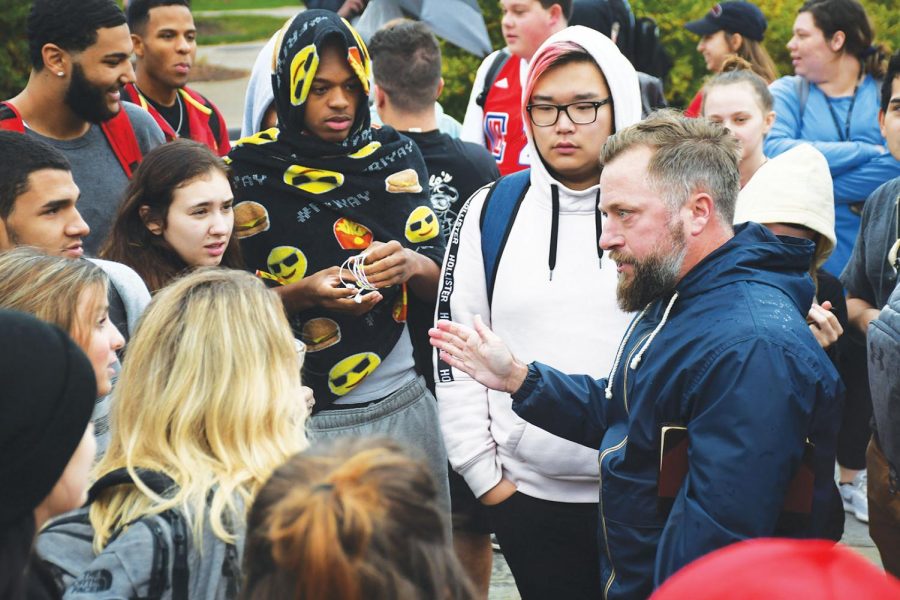 The religious speakers engaged students in a heated debate at the SSC.

The Warren Student Service Center patio quickly turned into a debate scene this past Tuesday as a religious speaker drew a large crowd of questioning students.
Matching the somber mood of the campus, the rain started to drizzle as the speaker shared his message, shouting, “We are all children of God in the kingdom of Jesus Christ.” Several students took offence to his remarks and questioned him on several aspects of Christianity.
Senior Bloomsburg University student Emel Rasim was one of the major voices to question the speaker.
Commenting on the issue of free speech on campus and her feelings towards the speaker, he explained: “I believe that we are a public state university. Free speech I understand, but yelling? He literally did not have a smile on his face. His eyes were red and bulged out. It was actually kind of scary, in a sense.”
She later went on to propose that he should hold an information session in which he can have a civil conversation with students.
The speaker did experience agitation from the crowd he drew in, as multiple students interrupted him, yelled at him, and attempted to take his Bible.
The main speaker could not be reached for comment, but a supporter of the speaker commented, saying that college students assume that those who preach the gospel hate the students.