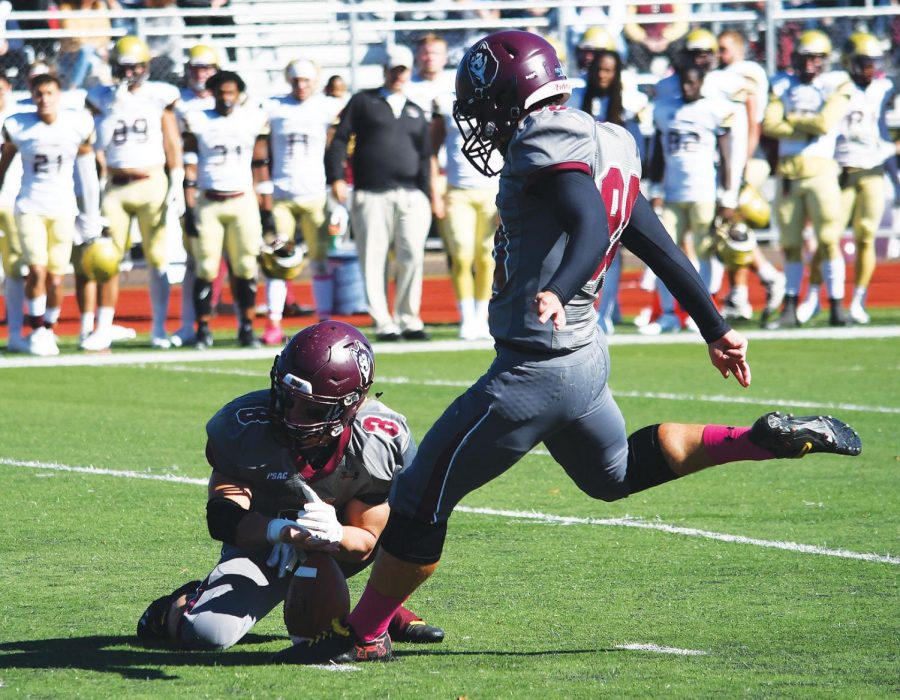 For the first time in four weeks, the Bloomsburg University football team stood tall in victory as they defeated Pennsylvania State Athletic Conference (PSAC) rival East Stroudsburg University (ESU) 22-17 this past Saturday Sept. 19.
The Huskies defense performed tremendously, attributing to all of the 22 points scored. On top of that, they limited ESU to their second-lowest total in pass yards (179) and rush yards (100) this season.
However, this game started like most of the previous had for BU: Remaining scoreless throughout most of the first quarter until the Warriors kicker Jordan Walters nailed a 35-yard field goal with 4:56 remaining the quarter to open up the scoring.
Staying scoreless the remainder of the first, a little bit of luck came the Huskies way to begin to second.
A snap over the head of ESU quarterback Jake Cirillo rolled all the way to endzone where sophomore linebacker Aaron Trumino was there to recover for the Husky touchdown giving them a 7-3 lead at the 13:31 mark of the second quarter.
That wasn’t the end of BU’s defensive playmaking the second. Freshman defensive back Quentin Gaskill picked off his first pass aa a Husky on the Bloomsburg 45.
That set up the familiar offensive combination of freshman QB Logan Leiby and redshirt junior wide receiver Michael Allen.
This time the duo connected on a 45-yard pass down to the Warriors seven-yard line.
Unfortunately, the drive stalled after that and the offense had to settle for a 33-yard field goal by freshman kicker Cameron Shollenberger to increase Bloomsburg’s lead to 10-3 with 5:06 remaining in the half. The score remained stagnant, keeping the Husky advantage to 10-3 going into the half.
BU’s defense came out of the locker room with the same first half prowess forcing ESU to go three and out on their first drive of the second half.
The Huskies defensive momentum shocked some life into the offense as their next possession was their best of the day going 73 yards on 12 plays. Not able to complete the drive with a touchdown, Bloomsburg once again had to settle for a Schollenberger field goal to increase BU’s lead to 13-3 with 7:42 remaining in the third.
The Warriors weren’t going to let the Huskies escape that easily though, especially this being their homecoming game.
Getting the ball for their next possession, ESU marched 75 yards on eight plays topping it off when Gunner Anglovich crossed the goal from 19 yards out to bring ESU within three at 13-10.
ESU kept the pressure on Bloomsburg as they recovered an onside kick on the ensuing kickoff. The surprise was all in vain for the Warriors as Bloomsburg’s defense formed a wall and forced a 44-yard field goal attempt by the Warriors that was shanked left preserving BU’s three-point lead going into the fourth quarter.
The score remained until the 10:24 mark in the fourth sophomore defensive lineman Alex Findura sacked Cirillo in the endzone for a safety to increase Bloomsburg’s lead to 15-10.
On the following kickoff, sophomore defensive back Chris Monaco bobbled the kick initially then scooped it up at the Bloomsburg 13 and made an 87-yard house call.
That run earned Monoco his first collegiate kickoff return for a touchdown. Monoco’s improbable run back completed a nine-point outburst by the Huskies in only 15 seconds.
The next possession saw more misfortune fall on the Warriors when Cirillo got knocked out of the game with an injury by a sack from redshirt sophomore defensive lineman Sir Michael Larsen.
After Bloomsburg gave the ball back when Leiby threw a pick on a pass intended for Allen at the ESU 37, the Warriors came back onto the field with some late life.
Warriors backup QB Ben Moser trotted onto the field and lead the Warriors to a late score when he rushed for a score from six yards out to bring the score to its final tally of 22-17.
Hopefully, this impressive defensive effort is something the Huskies can make a weekly occurrence.
Nothing would help a young quarterback more than him knowing he doesn’t have to score every drive since his defense will keep the game and possibly even provide great scoring opportunities off of turnovers.
Players like redshirt freshman defensive back Cameron Young, who lead the Husky defense in tackles last week with nine will have to continue to perform well.
On the offensive side of the ball, Allen and Leiby will have to prove they’re a consistent scoring duo in order to support the recent strong defensive effort.
Bloomsburg has a great chance to start up a winning streak as they welcome PSAC rival Lock Haven this weekend who currently sits at 1-6 overall (0-4 in conference play) and is riding a current six-game losing streak.
Having lost all six of their games by 20 points or more, it seems that if the Huskies come out with the same defensive effort and execution, they did last week there should be no reason they don’t come away victorious.
In order to keep the Bald eagles at bay, the Bloomsburg D will need to key in on running back Chantz Swartz who averages 95.14 yards per game along with four touchdowns.
Through the air, the Huskies will have to keep tabs on Jalen Jackson who averages 67.67 per game with four touchdowns as well.
Historically this matchup has been a favorable one for our Huskies. Posting a 5-2 overall record which includes last year’s dominate 33-7 victory at Lock Haven.
With history on their side and it being homecoming weekend, the Huskies should come out firing on all cylinders motivated to put together their first winning streak of the season.
Bloomsburg’s homecoming game kicks off this Saturday, October 26, at Danny Hale Field at Redman Stadium at 2:00 p.m.