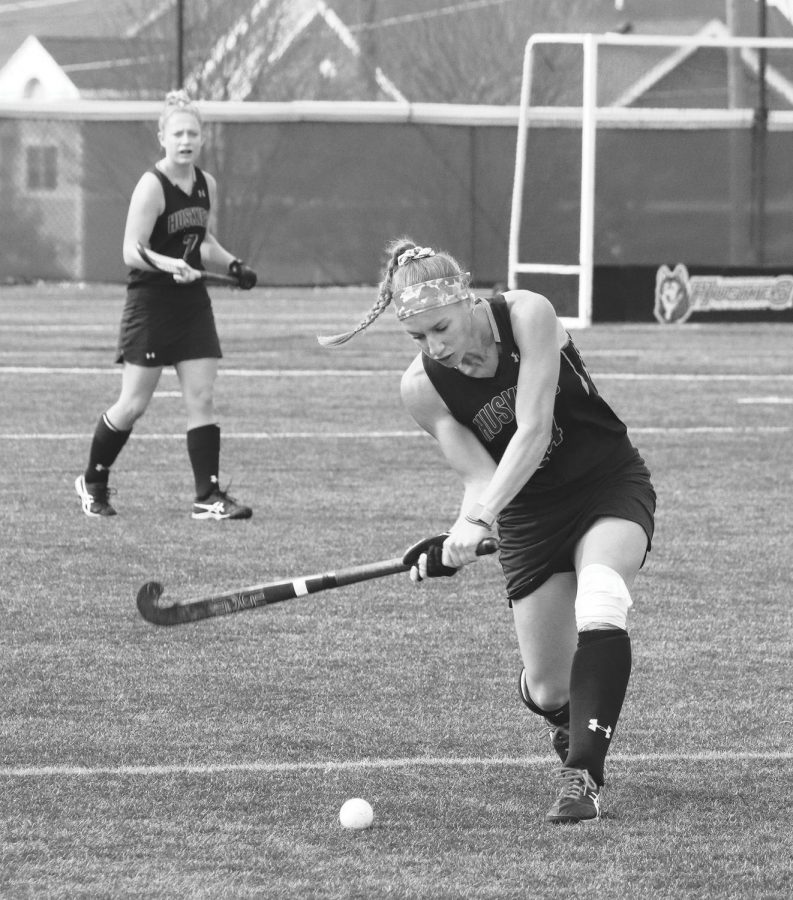 The Bloomsburg University women’s field hockey team was defeated by the Mansfield University Mountaineers in a heartbreaking  4-3 loss Wednesday night. With te loss, the Huskies now sit at an overall record of 6-11 and a Pennsylvania State Athletic Conference (PSAC) mark of 3-6.

With the win, the Mountaineers have clinched their playoff berth and overall record jumps to 12-5 with a 6-3 PSAC record with the victory.

The Huskies were on the road this week as they traveled to Karl Van Norman stadium in Mansfield to face the Mountaineers. It was a slow first quarter as both teams remained scoreless.

Things began to heat up for the Mountaineers in the second quarter though, as a Mansfield player was able to break the Husky defense and score the first goal 17 minutes  seconds into the game. Another quick goal was earned by the Mansfield offense at the 24:16 minute mark to quickly make it 2-0.

The Huskies offense was finally able to awake in the second half and earned their first goal when senior Willow Perkins shot to beat the Mansfield keeper and put the Huskies on the board.

The Mountaineers fired right back and got a penalty stroke goal to keep their two-shot lead and make it 3-1.

Fire still raged within the Huskies though, and once again the sophomore defensive midfielder Kristen Robinson stepped up for her team and played deflection off the keeper and scored a much needed goal.

Robinson continued her aggressive play into the fourth quarter and set up a penalty stroke that was put home by sophomore defender Callie Edwards, tying the game.

The pressure was palpable at Karl Van Norman stadium as these two PSAC titans found themselves gridlocked at 3-3. It was anyone’s game until the hopes of the Huskies were shattered 55:16 minutes into play when a shot broke through the Bloomsburg defense and was sent into goal. The goal seemed to be all the Mounties needed to preserve the conference victory.

Unfortunately for the Huskies, they were outplayed in almost every category. Bloomsburg found itself outshot 10-12 for the contest and fell 2-3 in saves for the evening. Mansfield was able to capitalize on penalty corners and bested the Huskies 9-6.

With their regular season nearly completed, the Huskies now just have one game left to play along with one more chance to stay alive for a possible playoff run.

Their loss to Mansfield has made the need for a win all the more critical, and their upcoming opponent Mercyhurst University may be their only chance to make it to the postseason.

The Mercyhurst University Lakers are probably the weakest opponent in the PSAC for the Huskies and a game against them could not come at a better time.

The Lakers currently have an overall record of 3-13 with a weak 1-7 record for the conference. Along with being the final opponent for the Huskies, the Lakers will also be travelling on the road to face them.

November 2, marks the date for the final game of the Huskies. Their game against Mercyhurst will be held at Steph Pettit Stadium and also marks senior night for a few special Huskies.

This game will be a big one for the Huskies as they hope for a win to keep themselves alive in the playoff hunt.

Junior goalkeeper Hannah Barnard was able to produly represent her team by receiving the Division II Athlete of the week award by the organization for her performance against the Marauders last week.

Her defensive skill was crucial in the past two shutout victories for the Huskies and is a major force that has kept Bloomsburg in the postseason hunt.

In the win against the Marauders, Barnard was able to put up an unbelievable 15 saves in the win. Those 15 saves tied for the third-highest single-game save total inside the divison. Her performance also earned the accolade of the most saves in a game in a shutout performance in the league this year.

Her streak continued to their game against Slippery Rock, where she put up another five saves for their 3-0 win. Barnard has proven herself to be a powerhouse for the Bloomsburg defense. Her domination at the goalkeeper position has allowed her team to excell this season and hopefully, this can be carried onto the postseason play. Her game will have to be on its best against Mercyhurst, as any slip ups could spell the end for the Huskies.

For the PSAC divison, the way the playoff system is set up, it only allows for eight spots in the postseason. Bloomsburg is sitting at the bottom at the eighth place seed, and now finds itself in desperate need for a win to hold onto that spot.

Sitting at the number one spot right now is West Chester University to no one’s surprise. They boast an overall record of 17-0 and remain undefeated in the conference. Their performance this season has been noteworthy and they have proven themselves to the team to beat.

Start time for Bloomsburg’s final regular season game of the season against Mercyhurst is set for 12 p.m. on Saturday, November 4 at Steph Pettit Stadium.