Practice what you preach

Freedom of speech applies to all 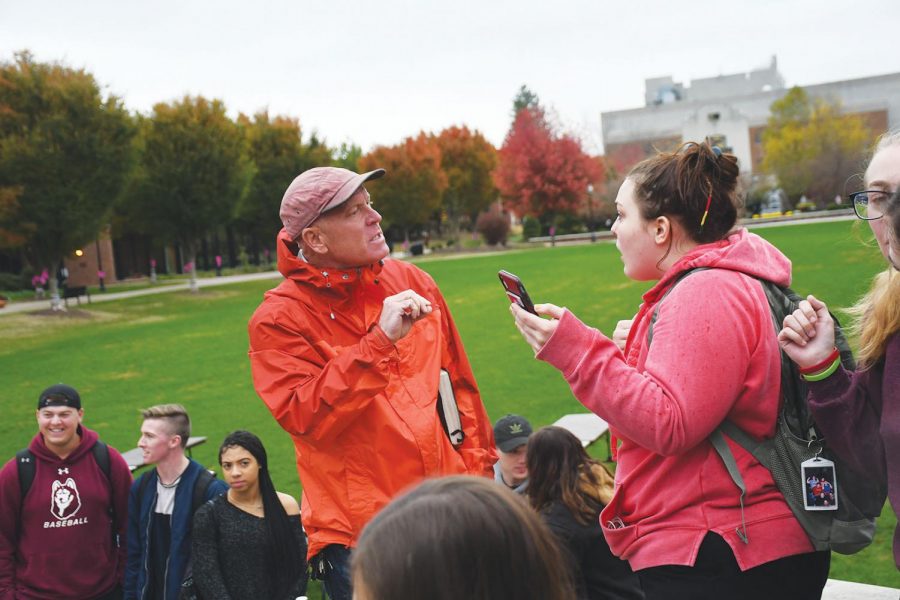 A student and a supporter of the speaker partake in a secondary argument on the SSC patio.

Last week our campus saw two conflicting ideologies come head to head: the “old-school” Christian thought process versus the new and progressive inclusive-to-all mentality, and at the end of the day, neither side emerged with a clear victory.
From the moment I got to the site of the conflict, it felt like a hostile environment. The Presbyterian speaker yelling trying to spread his message combined with the growing crowd of hecklers quickly created a hostile environment.
The speaker was facing a barrage of insults towards him, with some students calling him a “pedophile” and others calling him a “virgin.”
He then defended himself with insults of his own, including calling a female in the crowd “a basic white girl.” As this trend continued throughout the “demonstration,” things naturally got more and more turbulent.
This begs the question: why should we listen to either of them? Both the speaker and students were talking from what they perceived the moral high ground, but neither acted as such.
The speaker was trying to promote Christianity. Standing in a metaphorical “ivory tower,” he went on to say that the students needed to be saved, and that his path was the way to salvation. Acting as a moral authority, he should not have stooped to name calling directed at the people he was trying to “save.”
In my opinion, however, the students were also acting out of line.
In the society we now live in, freedom of speech and tolerance is preached throughout our upbringing. “The Golden Rule” was paramount through my schooling and especially my home life. It seems to be a bit hypocritical to expect others to be tolerant of your opinions when you don’t hear out theirs.
Having said all that, I would never say I am a moral authority. I swear like a sailor and drink like a fool (amongst many other sins and degenerate acts).
At the same time though, I would like to think that I respect everyone’s opinions. I may not always agree, but I’ll let them speak and hear them out.
I talked to a supporter of the speaker while I was at the demonstration, and we had a very civil conversation. I am not a religious person, but he respected where I was coming from and I did the same.
He went on to say that this country is great because “we can have that disagreement on ideologies then go to town and have a piece of pizza.”
I think this quote embodies what I am trying to say perfectly. It’s very cliché, but can’t we all get along? Have civil discussions regarding controversial topics and move on when the conversation is over. Remember, we are all trying to navigate the rat race that is life.

Ed is a senior Art major and is the Digital Managing Editor for The Voice.