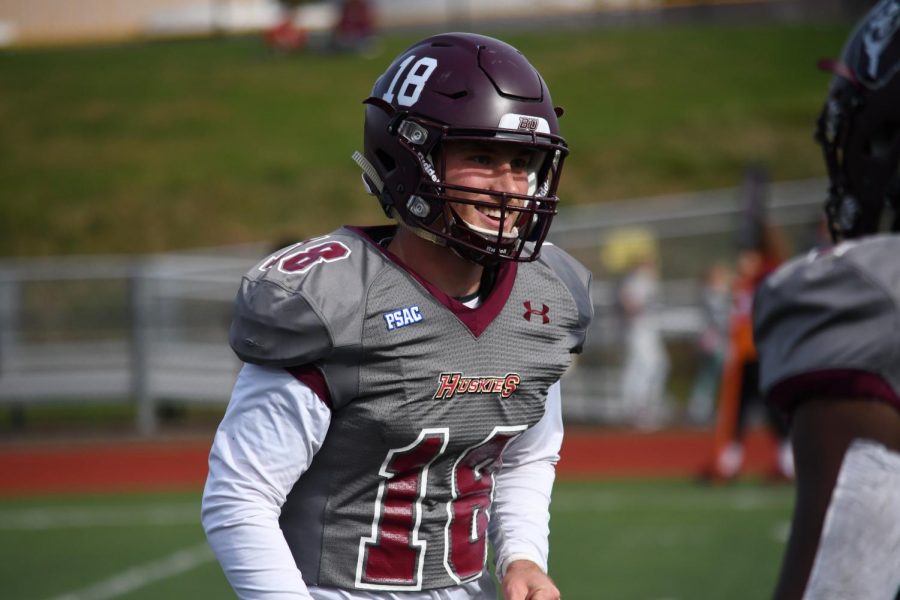 As the great manager Lou Brown said from the movie “Major League”: “If we win today, it’s called two in a row. And if we win again, it’s called a ‘winning streak’… It has happened before.”
The Bloomsburg University football team will try to build their very own win streak this Saturday against fellow Pennsylvania State Athletic Conference (PSAC) opponent Millersville University.
Coming off a victory over Lock Haven (another PSAC rival), 54-27 in last week’s homecoming game brought the Huskies’ conference record to 2-3 and overall record to 3-5. Bloomsburg has put together two wins in a row for the first time this season with Millersville in their sights to be the third.
Some big highlights from last week’s victory include freshman quarterback Logan Leiby playing his best game in a Bloomsburg uniform, passing for 272 yards on 16-19 attempts along with four touchdown passes.
On top of him, BU’s most dynamic receiver is redshirt junior Michael Allen. To add to his impressive Bloomsburg career, Allen hauled in eight receptions for a career-high 164 yards along with two touchdowns. Allen’s four-year performance places him with the elite company in BU football history.
Now totaling 162 career receptions, Allen now sits fourth all-time in career receptions at Bloomsburg while only being 11 receptions behind the third-place mark. On top of that, Allen has now racked up a total of 2,239 career receiving yards, placing him fifth all-time with only 10 yards to go to claim fourth on the all-time list in that category.
Redshirt freshman running back Khalil Nelson has continued to step up to the needed position, rushing for over 100 yards for the first time in his career and scoring a touchdown in the win over Lock Haven.
Redshirt junior running back Nyfeast West chipped in 55 yards off seven attempts, along with two touchdowns of his own in the homecoming victory.
Bloomsburg is still without original starting running back duo Alex Gooden and Qmac Quiteh, who both were injured earlier this season.
Looking at Millersville, the Huskies offense could see a repeat performance as the Marauders currently rank second to last at 15 in total defense in the PSAC.
Giving up a total of 40 touchdowns this year and letting opposing offenses average 457.3 yards, Leiby, Allen and Nelson ought to be licking their chops looking at the film as they continue to prepare for this matchup.
Even though Bloomsburg’s total offense ranks in the lower half of the PSAC, there’s no question the Huskies have some favorable matchups that Millersville should allow them to exploit.
In addition, the offense isn’t the only unit that should be excited to strap on the pads this week. Millersville’s offense also ranks second to last in the PSAC, averaging 242.8 yards per game, 13 total touchdowns and a measly 3.8 yards per play.
Considering that Bloomsburg’s total defense currently stands at eighth overall, it seems that the Huskies have a real chance to make it a long day for the Marauder’s offense.
Digging a little deeper into the Millersville stat book, it becomes more apparent that the Huskies should clearly come away with a third consecutive win this Saturday.
On the ground, the Marauders seem to attack with a running back by committee approach. However, that approach doesn’t appear to be working out well for Millersville, as no back averages more than 25 yards per game.
The passing game isn’t one The Ville should look too fondly on either. With their typical starter Collin Shank injured, Millersville has been forced to turn to options like freshman Miles Miller who threw three picks last week.
That performance saw Miller replaced for senior wideout Evan Morrill. It’s safe to assume the secondary may have a big day , considering that Millersville is struggling to find someone to lead the offense.
Historically, the Bloomsburg football team has dominated this matchup. Currently on a 19 game consecutive win streak against the Marauders, the Huskies haven’t lost to Millersville since 1998.
Even more of a good sign for the Huskies is the game being played at Biemesderfer Stadium, a place where BU has currently won eight consecutive games in a row.
And if last year’s 38-14 win is any indication, Millersville should be another confidence booster and opponent, BU should manage with relative ease.
That matchup saw BU’s defense swarming the ball and quarterback all game long, something they will look to repeat in this matchup. Coming away with an early pick-six, converting turnovers into 17 points, and finishing with eight sacks; this year’s defense easily possesses the ability to put up similar numbers in this year’s go around.
Bloomsburg’s final road game of the season kicks off this Saturday, Nov. 2 at 12:00 p.m. at Beimesderfer Stadium from the campus of Millersville University.