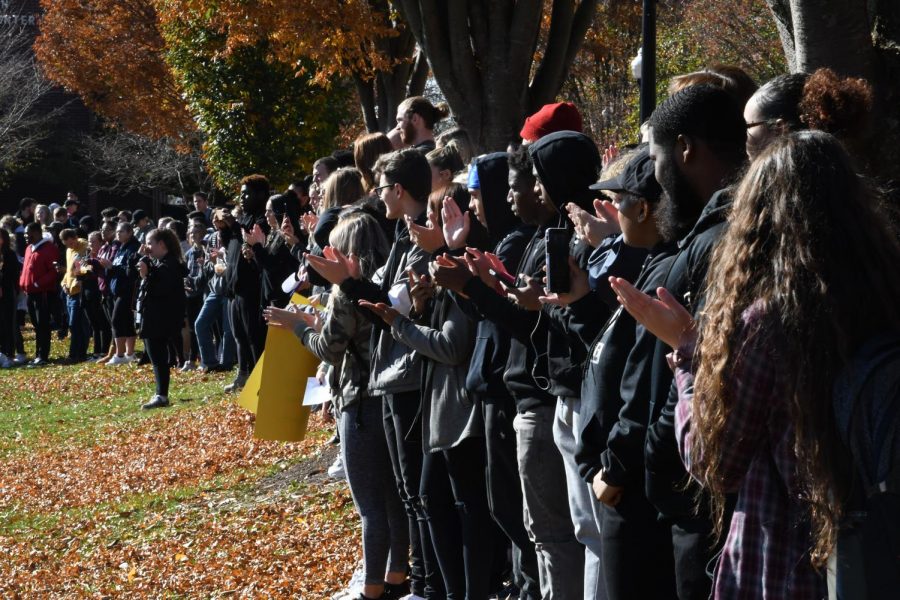 A group of student protestors gather on the quad.

Protestors took to the quad on Wednesday afternoon to speak out for ‘diversity, inclusion and safety’ at a peaceful rally sparked after outrage over a racist video of a student worker that emerged this past weekend.

While the recent emergence of the video showing a student worker using racial slurs was the catalyst for the event, protesters marched for a number of other reasons. One such reason is frustration over what some feel is a lack of transparency between BU administrators and students regarding issues such as the accuasation of sexual assault against President Hanna, the death of four students (Justin King, Curtis Melville, Nicholas Medveckus and Michael Somerville), sexual assaults that happen on or near campus and the recent release of two upper-level administrators.

Some students also feel that there is currently a lack of diversity among the university’s administration.

“We want D.I.S,” the students chanted while marching. “We want diversity. We want inclusion. We want safety.”

Many students marched with large posters such as those that read “No Hate,” and “Privilege is learning about racism instead of living it! #ShutUpAndListenWhitePeople.”

CGA President Steven Lopez stood in front of students protesters and found himself becoming emotional in his speech. “This is our time now to say that we’re going to make this change,” he said.

Student speaker Sophia Robinson emphasized the importance of recognizing white privilege in her speech. Robinson said to her fellow white peers: “I challenge you to check your white friends and family who don’t know better, because we can all do better.”

“White silence is violence” she said, with a voice full of nerves and emotion.

BCS President Micheala Poulard made a powerful statement on the quad: “For everyone who looks like me and who doesn’t, we matter.” She continued to thank everyone for coming out to the event in support of their peers.

Protestors marched around the quad about three times before walking down to Carver Hall and gathering on the steps.

On the steps of Carver Hall, President Hanna thanked the students for speaking their minds and holding a peaceful protest. “This is not about black and white. This is about human dignity; we all breathe the same air regardless of our color,” he said.