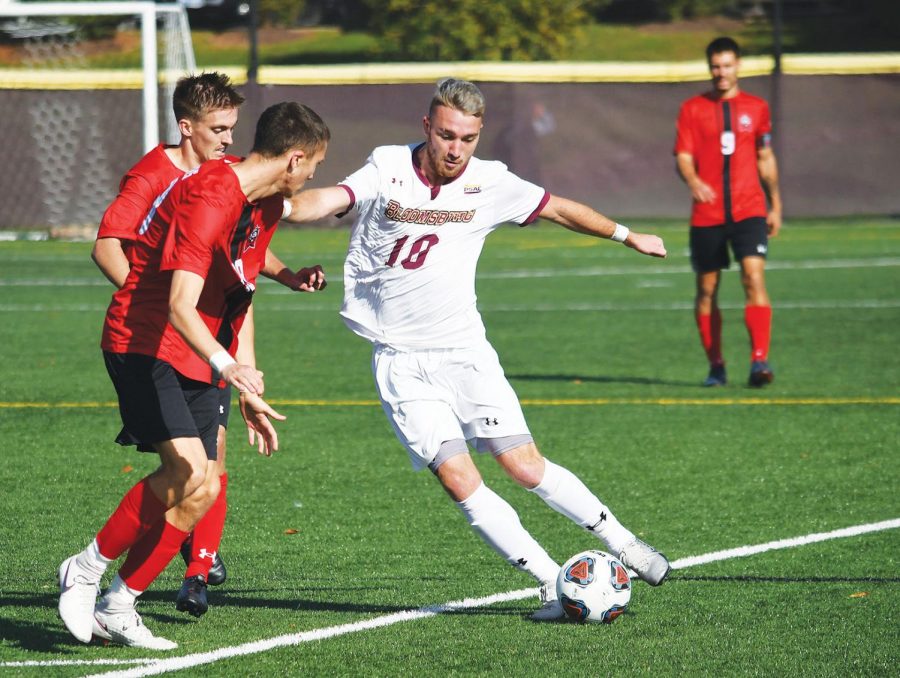 Senior Tyler Maderia wraps his career with 17 goals and 5 assists.

The Bloomsburg men’s soccer team suffered a heartbreaking defeat against rival West Chester University in 3-1 loss. With this loss, the Huskies overall record dropped to 7-10 overall and a 5-10 record inside the Pennsylvania State Athletic Conference (PSAC). The overall record for the Golden Rams jumped to 13-3-1 and 9-2-1 for their conference.
It was a cold day for the Huskies as they traveled to West Chester Pennsylvania to square off against the Golden Rams in their home turf of Rockwell Field. The Huskies were looking to continue their win streak on the road, their last game being a decisive win against Daemen College 4-2.
This was the last regular season away game for the Huskies and they had a lot to prove against the Golden Rams.
The match began at 2:30 p.m., with the first half being stagnant until a Husky defender was able to strike first blood against the Golden Rams. Freshman Stephen Hollis was assisted by the redshirt sophomore Olly Whitman and the two were able to crash the Golden Rams’ defense and score after 37:40 minutes of play. This goal marked the first goal of Hollis’ collegiate career.
The Huskies could not keep the lead for long though, as the Golden Rams were able to respond with a goal of their own right before the half ended. Golden Ram offender Eric Greer was able to break through the Bloomsburg defensive line and score 42:14 minutes into play. This marked his second goal of the season.
Things would only get worse for the Huskies in the second half, as their defense was not able to stop the continued barrage of shots by the Golden Rams’ offense. Shortly after the second half began, a West Chester offender fired a shot off an assist and gave the Golden Rams’ a 2-1 lead. Golden Ram Josh Daniels was assisted by Stephen Thompson to give them the lead 8:08 minutes into the second half.
Another goal would be made against the Huskies at the 67:26-minute mark when Stephen Thomas would make another play and score his fourth goal of the season. The rest of the game remained scoreless as the Huskies were not able to respond, and lost 3-1.
Bloomsburg was outshot for the night, as their six shots fell short to West Chester’s 15. The Huskies did manage to make a stronger defensive effort; they were able to save three shots to the Golden Rams’ one. For corner kicks, the Huskies once again fell short. They took two corners to the Golden Rams’ four.
West Chester certainly played more aggressive during the game; they racked up 12 fouls against the Huskies while they only had seven. The Huskies did have some foul trouble, as Stephen Hollis and Olly Whitman both received yellow cards during the match.
This match certainly strikes a blow to the ego of the Huskies, for their history playing the Golden Rams’ has been a favorable one for the most part. Of the 13 games between the teams, the Huskies have an impressive 7-4 lead on the Golden Rams along with two ties.
The longest win streak for the Huskies against them was a four-game win streak from Sept. 2, 2009 to Sept. 17, 2011. This loss will make the rivalry between the teams even stronger for the Huskies as they will look to keep up their positive record for their rematch.
The Huskies now have to look towards their final regular season game against the Millersville Marauders. Advantage will certainly be on the side of the Huskies, as the Marauders will have to travel all the way to Steph Pettit Stadium for their final regular season match of the season.
A win against the Marauders here will be crucial for the Huskies as they hope to keep their hope alive for the postseason. Looking at the PSAC East standings show a division where anything can happen. Millersville University and West Chester University have both secured their postseason berth, but the remaining spots could very well be taken by the Huskies.
The Huskies currently sit at fifth place in the conference as their 5-5 PSAC record fall just short below Lock Haven University and East Stroudsburg University. This can fluctuate though, as these teams have either one or two more games to maintain their standing. A loss for East Stroudsburg would be a huge benefit for the Huskies.
With the loss on Wednesday, the Huskies were eliminated from the 2019 PSAC tournament which will start on Nov. 12.
The final regular season match for the Huskies has been set for Saturday, Nov. 9. With their season riding on this, the Huskies can hope for good weather and a good homefield crowd to cheer them on. Match time has been set at 3:30 p.m. at Steph Pettit Stadium.

For more information and statistics on the 2019 mens soccer season, please visit buhuskies.com.