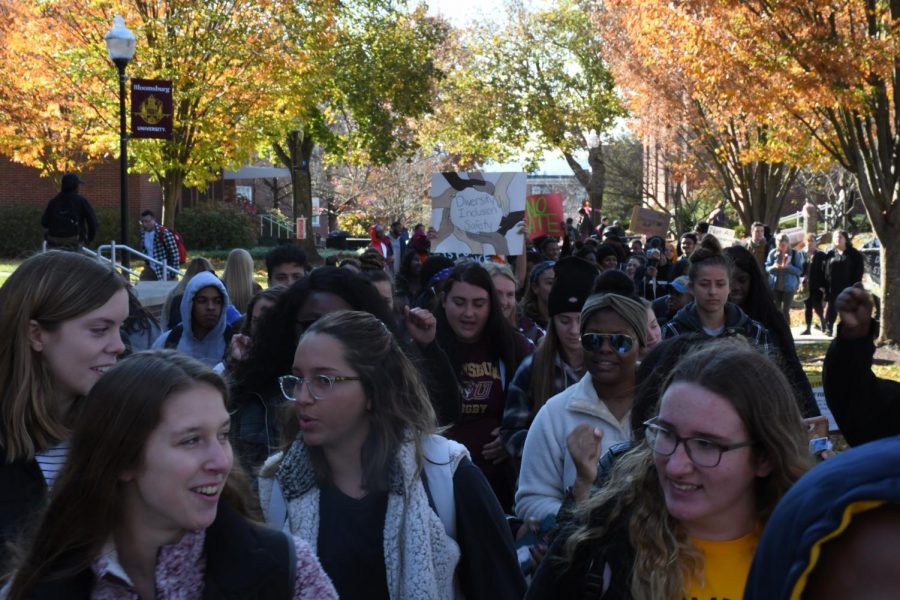 The protest that took place on the quad had an attendance reported in the thousands per the Press Enterprise. The protest had multiple campus leaders talk through a bullhorn. After the speeches concluded, the protesters circled the quad chanting, “we want D.I.S.” D.I.S. stands for diversity, inclusion and safety. After multiple passes around the quad, the march continued down to Carver Hall where the speeches continued.

Former BloomU student Keith Forbes stirred up some controversy as he uploaded a video via social media of his attendance to the recent protest on Bloomsburg’s campus.
On November 6, students and faculty gathered together on the Quad in protest of on-campus racism and injustice after a video of a BloomU student using a racial slur spread on social media.
Forbes took to his Instagram uploading a ten-minute video voicing his issues with the protest that left a number of students upset.
The video featured Forbes recording the protest, “memeing” the protestors speeches and adding his own personal commentary to the video.
Following the upload, Forbes received plenty pushback via the comment section of his video.
“Look, I think there’s nothing wrong with organizing and coming together for a greater cause… but what’s next after that?’’ Forbes said.
One of Forbes’s main issues with the protest was that he perceived students to be complaining without putting any action into their complaints.

In addition, Forbes’s largest issue with the protest was that he felt students were taking away rights to free speech.
“I’m not condoning his behavior, nor am I condoning the language he used, but what I am doing is respecting his right to speak freely just like how I’d want someone to respect my right to speak freely,” said Forbes.
According to Forbes, “You cannot police free speech,” which is why he decided to create and share the controversial video.
“That’s the beauty of America. We can speak freely regardless of how anyone else feel about it,” said Forbes.
Towards the end of Forbes’s video, he got the chance to interview students and get their opinions on the protest.
According to Forbes, he found that a number of students didn’t know what the protest was for. He felt students attempted to join a social justice bandwagon without knowing the reasons that brought the protest together: diversity, inclusion, and safety.
However, Forbes remained fairly skeptical of those three attributes.
According to Forbes, one person’s involvement in the protest baffled him: university President Dr. Hanna.
“A lot of the students were protesting Dr. Hanna… but when he got on the microphone to speak everyone was clapping like he was a superhero,” said Forbes.
Forbes made these comments amidst Dr. Hanna’s sexual assault allegations made by a university secretary last year.
Prior to those allegations, Hanna had also been twice relieved of his duties as an administrator with other universities.
As said by Forbes, he found Dr. Hanna’s involvement in the protest hypocritical to its own cause.
Forbes also expounded upon the protest’s accusal of the university’s non-response to four student deaths this semester.
When asked if the negative responses to his video would discourage him to create further content Forbes replied: “Oh no, I told everybody; my foot will remain on their neck until they show me something besides complaining.”
Many students who took active roles in the protest were contacted for comment on the video. However, they elected to decline.