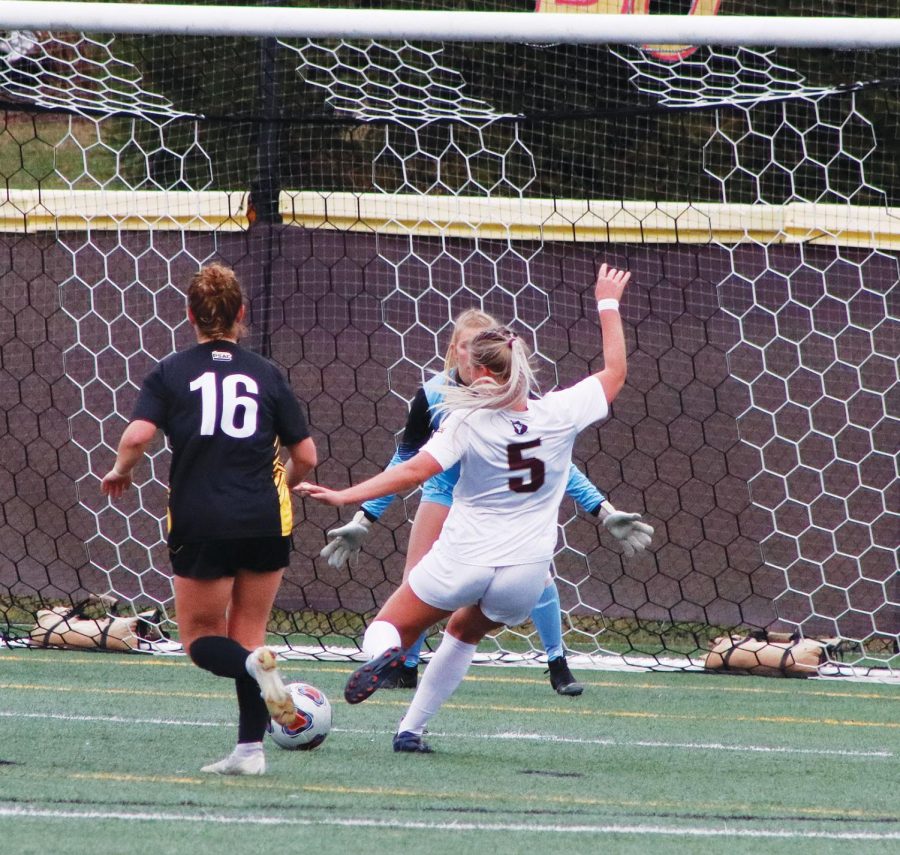 Junior Lauren Hoelke rips in the opening goal in the Huskies 4-0 second round win.

The No. 6 Bloomsburg University womens soccer team will hit the road to Albany, N.Y. for the Sweet 16 round of the 2019 NCAA Division II womens soccer tournament against Pennsylvania State Athletic Conference (PSAC) foe West Chester Univeristy on Friday, December 6.

The Huskies are coming off a 4-0 victory over conference foe Millersville in the second round of the tournament, which came back on Saturday, November 23.

West Chester defeated Slippery Rock University, 4-2, in the second round to advance to the Sweet 16 stage.

This marks the fourth time the two schools will meet this season, the last one coming back in the opening round of the 2019 PSAC tournament where West Chester scored with less then a minute remaining in double overtime to shock the top-seeded Huskies out of the tournament.

Bloomsburg is led by junior Lauren Hoelke who has recorded 12 goals and 10 asssist this season for a blistering 34 total points.

Sophomore forward Nicole Varano ranks behind Hoelke in scoring with nine goals and four assists good for 22 points on the season.

Bloomsburg’s real strength though, comes in goal as redshirt junior goalkeeper Jenna Hawkins has been a brick wall all season long.

Hawkins broke the record for more career shutouts with 28 earlier in the year, along with being named PSAC Eastern Division Defensive Player of the Year by the conference.

Hawkins leads the PSAC in nearly every statistical category for goalkeepers, with the most impressive one being a .352 goals against average, with the next closest competitor being an .801 average.

The Huskies had a total of six players earn all conference acollades prior to the 2019 regular season.

As for West Chester, the Golden Rams, who are the no. 6 seed in the atlantic conference, enter the Sweet 16 matchup with the Huskies with a 14-5-2 record on the year with a 10-4-2 mark in conference play.

After beating Bloomsburg in the opening round of the 2019 PSAC tournament, West Chester then went on to fall to Edinboro University by a score of 1-0 in the semifinal round.

The Golden Rams then turned around and received the six seed in the Atlantic Region and defeated Concord University in the opening round before fighting off no. 2 Slippery Rock by a score of 4-2 in the second round for the right to face the top seeded Huskies in Albany, N.Y.

West Chester is led by Hannah Zach who has totaled 13 goals and two assists which is good for 28 points on the year.

Jenny Bail ranks just behind her with eight goals and three assists of her own for a total of 19 points.

Brooke Myers has started 15 games in goal for West Chester and boasts a 1.02 goals against average along with a 0.712 save percentage.

The Huskies and West Chester will battle for the right to move onto the Elite 8 round of the tournament where either team will face the winner of the Saint Rose/Molloy matchup on the neighboring side of the bracket.

A year ago, the Huskies fell in the Elite 8 round to the eventual National Champion University of Bridgeport.

Bloomsburg and West Chester is set to begin at 10 a.m. on Friday, December 6 at the Plumeri Sports Complex on the campus of the College of Saint Rose in Albany, N.Y.