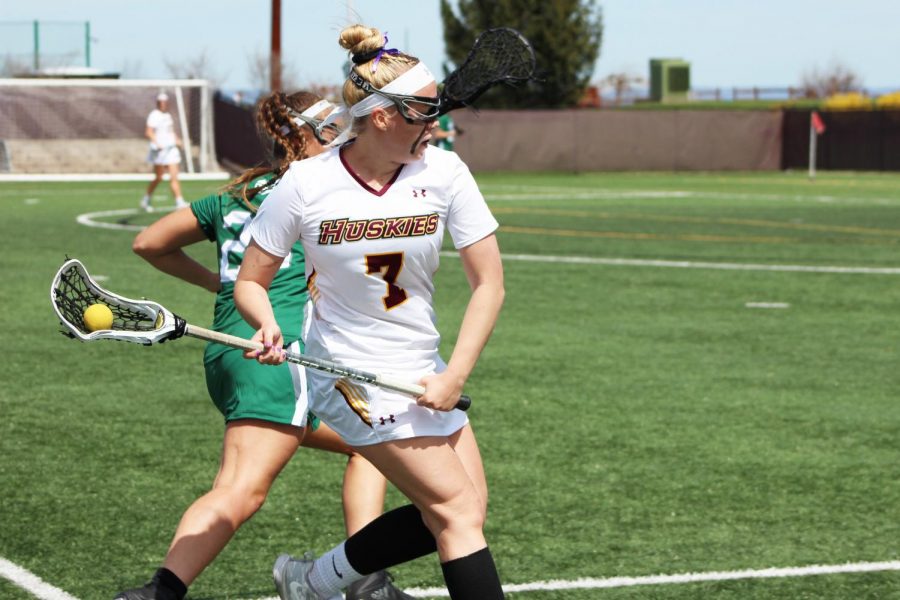 Kirsten Wozniak (7) is one of four seniors on the team.

This Friday, Feb. 14, will begin the 2020 season for the Bloomsburg University women’s lacrosse team. For their season-opener, the Huskies will travel all the way to Lakewood, New Jersey to face off against the Georgian Court University Lions. The match is set to begin at 3:00 p.m.

This will be the third time the Huskies will be squaring off against the Lions in their program’s history. The Huskies have not lost against Georgian Court yet and hope to keep it that way. Their first meeting between these teams happened on March 7, 2012. It was a home victory for the Huskies as they bested the Lions 25-10. They would not play the Lions again until last season, where they played on February 26, 2019. The Huskies were again able to use the home field advantage and won, 17-10.

Both of these matches were non-conference matches and only really affected the overall record. Georgian Court University is part of the Central Atlantic Collegiate Conference (CACC). This is another division II conference with 14 members.

The 2019 season for the Huskies women’s lacrosse team was a proficient one. With moments of greatness, the Huskies had some big wins but also some big losses. Their overall record last season was 11-6. They earned a conference record of 7-5, sported a home record of 6-3, and had the most trouble on the road, finishing with a 5-3 road record.

The season was able to end on a high note though, their final game against the Gannon University Golden Knights was a rousing success. With a final score of 22-8, the Huskies were able to finish the season with a one-game win streak and give their seniors a proper send off.

That match against Gannon University proved to be the perfect end to a season for the Huskies, as it was their highest scoring game and biggest defeat of the season.

There are a number of key players that will be bringing their talents back for another season.

Senior attacker Grace Kelleher will be bringing her strength back to the Husky offense. Kelleher scored a total of 66 points last season. She made 39 goals and 27 assists. Attempting 93 shots, she nailed a shooting percentage of .419

Another key attacker for the offensive front is junior Abby Bergman. Bergman shot 62 shots last season and had a .500 shooting percentage. She was able to provide the Huskies with 31 goals and eight assists, totaling up to 39 points for the Huskies.

A huge component for the Husky defense will also be returning for play this season. Senior Angela DiPasquale was a defensive powerhouse last season. She played a total of 917 minutes and 18 seconds.

Her defensive abilities were unparalleled. A whopping 165 saves were made. She boasted an impressive save percentage, sitting at .531. She allowed only 146 goals in the entirety of the season, with a goal’s allowed average of 9.55.

When asked about her thoughts for this season, DiPasquale said: “We are very excited to for this season! We have been working very hard in our off season and preseason and we are ready to prove that we are here to fight for that PSAC Championship!”

At the midfield position, the efforts of junior Anna Dempsey will also be making a return for the 2020 season.

Senior Kirsten Wozniak is another key midfielder that will be giving her final 2020 season. A pivotal part for the Husky team, Wozniak scored a total of 17 points. She took a total of 18 shots with a shot percentage of .389. A total of seven goals and 10 assists were made by Wozniak.

Wozniak seemed very enthused about the 2020 season saying: “We are expecting great things this season with a strong senior class leading the team, everyone has been working hard and in the right mindset to get big wins and we’re anxious to get into PSAC play to prove ourselves.”

The Georgian Court University Lions also had a successful 2019 season. The Lions were able to reach a record of 15-4 overall, and boast an 11-game win streak by the end of their season. They completely dominated their division, sporting a 9-0 record inside the CACC. They were the champions of the CACC Tournament Finals against the Jefferson Rams, who they beat 20-7.

The Huskies will have to come out strong if they hope to knock down the 11-game win streak that the Lions are still riding off of. A will here will be a great motivation to start off the 2020 season, and that will be needed when they face off against the Shepherd University Rams for the first conference game of the season on March 11.

The Valentine’s Day bout against the Georgian Court Lions is set to start at 3:00 p.m. on Friday, February 14 from the campus of GSU.