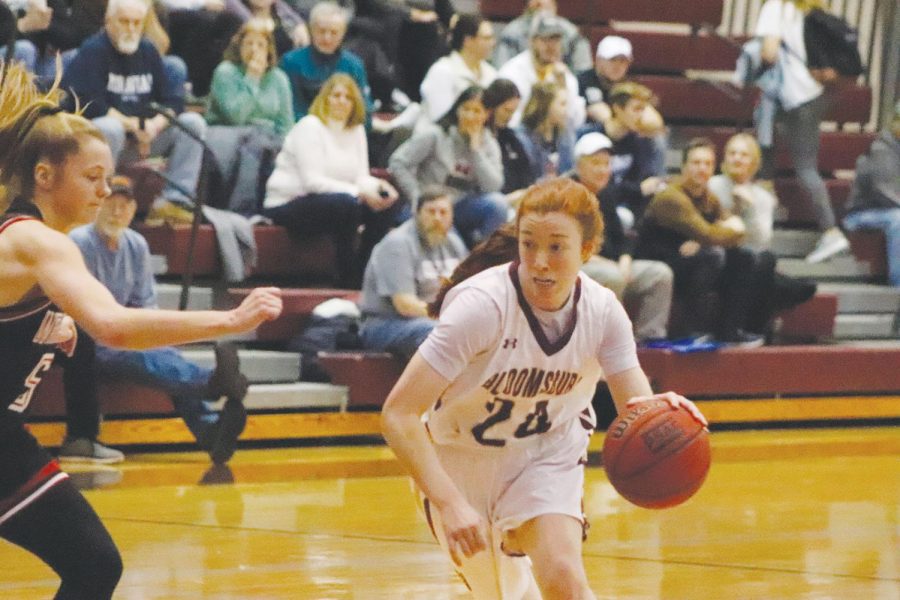 Emma Saxton drives to the lane against Mansfield.

The Bloomsburg University Women’s Basketball (11-11) returned to their winning ways last night with a win over Pennsylvania Sports Athletic Conference (PSAC) rival Mansfield (3-21) with a final score of 70-60.

The Huskies were led by junior guard Emma Saxton and by junior forward Megan Brandt. Saxton led the way with 15 points and Brandt followed with 13 points. Junior Meghan Corridoni pitched in nine points of her own to round out as the top scorer.

The Huskies dominated for three quarters of the game. In the first quarter the women held the Mountaineers to single digits while the Huskies more than tripled their score with 13 points. The second was much closer contended with Bloomsburg scoring 14 points to outpace Mansfield 12 points. During the third quarter Bloomsburg started to pull away scoring ten more than Mansfield’s 11 points. During the fourth quarter was when the Huskies defense started to slip. The Mountaineers more than doubled their score from the previous three quarters combined with 33 points. They outscored the home team 11 points. Even with Mansfield’s gallant efforts, it was not enough to overcome the lead the Huskies built earlier in the game.

The difference in the game between the two teams was the Huskies’ deep bench. The team scored 30 points off the bench. The Mountaineers scored a respectable 19 points from their non-starters.

The second aspect that tipped the scales in Bloomsburg’s favor was the rebounding on both the offense and defense. They had 32 rebounds on defense and 11 boards in the offensive zone, leading to 14 second chance points.

The women also helped their own cause by taking the most fouls of the season and making 21 free throws to set a season record as well.

The team looks to continue their winning ways against West Chester University (8-14) on Saturday and then against Lock Haven University (11-11) on Wednesday.