Huskies fail to find any last-second magic; fall to Griffins 8-7 on Wednesday 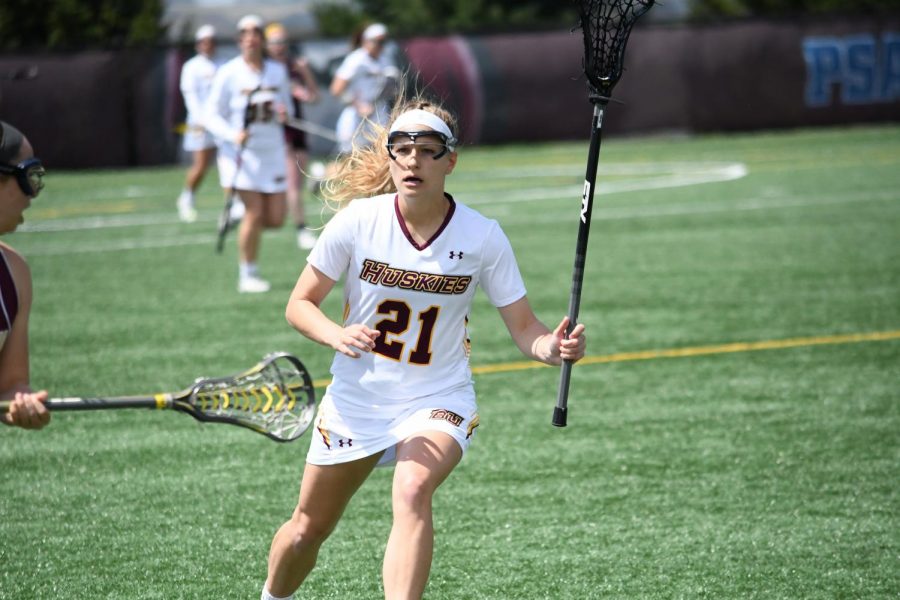 The Bloomsburg University women’s lacrosse team falls for the first time this season in a crushing 7-8 loss. On Wednesday afternoon at 3 p.m., the Huskies went on the road to battle against the Seton Hill University Griffins.

This loss to the Griffins lowers the Huskies record to 1-1, while Seton Hill starts off their season undefeated at 1-0.

Action began quickly in the match, as the Huskies drew first blood after a goal was scored by junior Abby Bergman within the game’s first four minutes. Bergman nailed the shot after an assist from redshirt freshman Grace Kelleher. The Griffins hastily fired back with a goal of their own and put the score at 1-1.

The Huskies were then able to retake the lead after a turnover caused by junior Anna Dempsey. Dempsey was able to crash Seton Hill’s offense and up Kelleher to make the second goal for the Huskies. A response was then made by Seton Hill, evening the game out at two. Things began to heat up with only 13:11 left in the half as sophomore Erica Wolfgang made her first goal of the season.

Despite giving her team the 3-2 lead, this shot would mark the last moment of the game when the Huskies found themselves on top. The Griffins nailed another two goals into the net before the half ended and sent the Huskies to the benches with a 4-3 score.

As the second half began, things looked good for the Huskies. They were able to win the opening draw but made a costly mistake that Seton Hill took advantage of. A Husky turnover allowed the Griffin’s offense to strike fast and put the score at 5-3 with 28:10 left to play.

The Husky offense surged with a rush of aggression and fired off three missed shots. Another score for the Huskies would not occur until the 23:12 mark. Freshman Kelsey Clauss made a crucial assist to Bergman, who made her second goal of the evening and cut the lead down by one.

An angered Griffins offense charged the Husky defensive front and they found themselves unable to stop the storm. Seton Hill used the next 13 minutes to launch a three-goal run and increase the Griffin’s lead to 8-4.

Penalties would plague both teams over the next four minutes, leaving either team unable to complete a clean possession. Senior Cailyn Gormley would end the stalemate and scored her first goal of the season. With only 7:42 left to play, the Griffins still held the lead at 8-5.

Within a minute, Gormley struck again and nailed a shot into the back of the net and put the game within two scores.

The Husky offense continued their barrage on the Griffin’s defensive front and scored their last goal of the night with only 2:13 left in the game. Clauss earned her third goal of the season and put the score at 8-7.

At the 1:45 mark, junior Anna Dempsey found the game resting on her shoulders. A free position shot gave Dempsey the opportunity to tie the match but was stopped short by a Seton Hill defender.

With only 26 seconds left in the game, the final possession of the Huskies was ended by a turnover. Seton Hill took the chance and ran out the clock and emerged as the victors in the first game of their season.

The key offensive players for the Huskies that evening were Dempsey, Gormley and Kelleher. Dempsey and Gormley each racked up two scores with Kelleher pitching in with her one goal and two assists.

The defensive front saw the efforts of junior Tiffany Diachynsky and senior Angela DiPasquale. Both Huskies were the cause of five turnovers and each grabbed eight ground balls.

DiPasquale nabbed 11 saves during the contest, another example of her defensive prowess. She also reached a pivotal moment in her collegiate career. Her 11 saves finally allowed her to hit the 500-save mark and has a career number of 508 total saves.

The Huskies finally return home for their next contest against the Lock Haven University Bald Eagles.

This game marks the first home game of the season for the Huskies and will provide them a perfect opportunity to nail a win. The action is set to begin at 4:00 p.m. at Steph Petit Stadium and will see the Bald Eagles play their first game of the 2020 season.