“Tremors”: the most neutral Kevin Bacon movie ever made 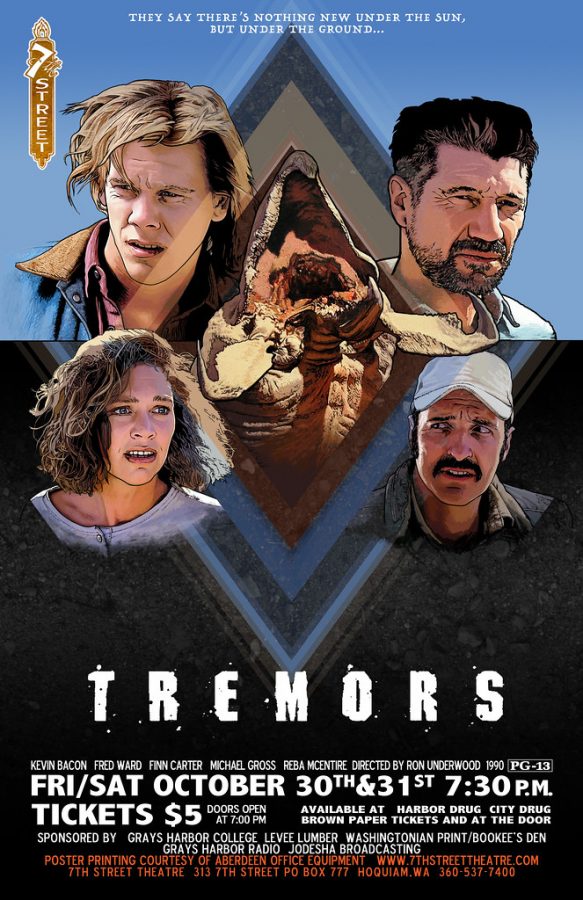 Welcome back to this week in forgotten cinema my faithful readers. This week we are looking back to the not so widely known cult classic, “Tremors.”

This film follows a duo of repairmen played by Kevin Bacon and Fred Ward who are seemingly lost in the monotony of their dull lives in the small desert town of Perfection, Nevada. However, the town is set upon by large, vicious, flesh eating worms that begin to eat the townspeople. It is here that the men team together with the townspeople and the help of seismologist new to town (played by Finn Carter) to defeat these worms and escape the town.

This film received good reviews from critics, applauding its tightrope walk of both comedy and horror elements. However, it only had a small success at the box office, netting an income of $16 million over its budget of $11 million. Cementing its place as a cult film and its future sequels being straight to video releases. With most citing its poor marketing and subpar trailer as the main cause of this.

As mentioned earlier, this movie walks a fine tightrope with its content. It both wants to be a monster movie with something akin to “Jaws” but on land. However, it maintains humor through catchphrases and one-liners akin to the “Evil Dead” franchise. And it walks this line very carefully and rather successfully, I would say it leans more towards the humor side but I have a propensity to not find movies scary so that may just be my personal bias. But its jokes and funny lines land with enough force for it to be the main idea for the movie to lean on.

A pet peeve I normally have for monster movies is when the characters depicted have varying levels of intelligence for the sake of the script. And despite appearances this movie does this successfully with the cast of characters solving problems with what information they know and using knowledge they gain along the way to their advantage. Which I was pleasantly surprised when I saw them doing so, as this movie does not have the appearance of better than average character writing. However, I am judging it for reaching than standard and not the bottom of the barrel.

In the past I have described movies similar to junk food, not very good for you but entertaining while you do it. This particular film I can only describe with neutral language. Though I suppose leaving no taste in your mouth is better than a bad one. This film feels completely self-contained, it had no major moral or reason for existence, no message to take away. It also had no particular negative aspects and its positives were also nothing exclusive or something to applaud. So, I am at a loss for words when saying if someone should watch this film or not. Watch this film if you have time to kill, not one of my most raving reviews I know but I have seen much worse.