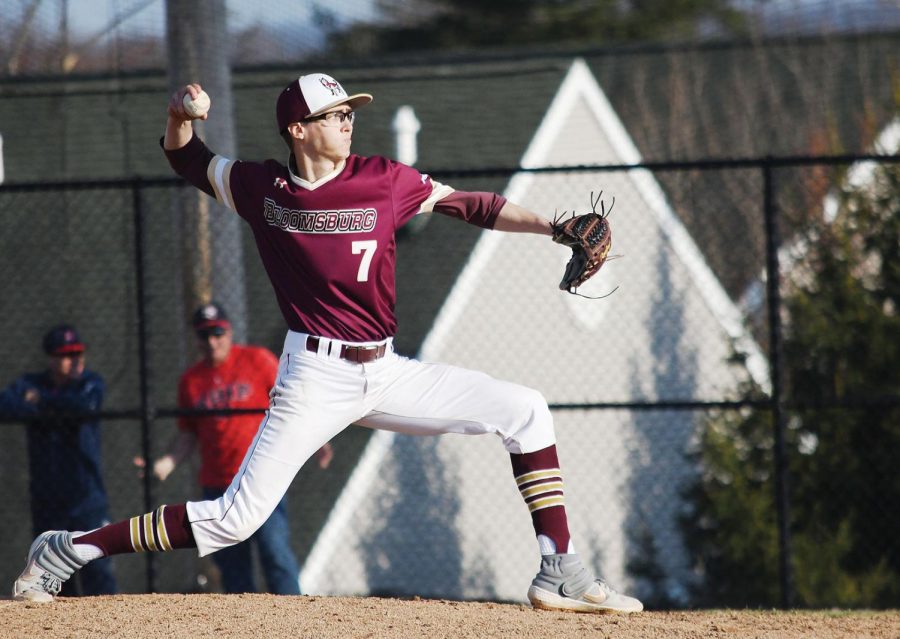 In their first action of the 2020 season, the Bloomsburg University baseball team put together an impressive weekend going 3-1 in four games. The team split their two Saturday games, winning the first against Newport News Apprentice School 8-7 then lost their afternoon matchup 7-3 to Virginia State University.
The Huskies didn’t let an opening day loss shutter their confidence as the came right back on Sunday and went 2-0 against the same slate of opponents. This time beating Newport News Apprentice School 5-1 followed up by a revenge game performance, trouncing Virginia State University 13-1.
Senior Chad Cooperman’s 2020 debut on the mound resulted in a quality start for the right-hander. Receiving the win while only giving up two earned runs (four total) allowing six hits, two walks, and ten strikeouts through five innings of work.

Offensively on the first day, Bloomsburg accumulated a total of 21 hits (11 in the first game 10 in the second game) coming from up and down the lineup. One of those 21 hits skied over the wall the first long ball this season for the team off the bat of senior Andrew Holmes.
Suiting up for two more games Sunday, the spotlight shined on senior Brett Alaimo. Appearing in only his second career collegiate start he earned his first collegiate win and was impressive doing so.
Finishing seven and a third innings, Alaimo allowed only an unearned run with six strike outs, six hits, and two walks while also throwing 61 of his 95 pitches for strikes. Only totaling two total innings pitched last season this initial start should spark excitement into the Huskies coaching staff about the potential of another strong-arm slotted in the rotation.
Looking ahead, Bloomsburg will travel to Clarksburg, W. Va. for a Saturday doubleheader followed by an afternoon cap Sunday against the Senators of Davis & Elkins College.
So far, the Senators have competed in three games that’ve all resulted in victories for the squad.
Those victories came in the form of an 8-0 vs Mansfield University, 6-2 vs Ohio Valley University, and recently this Sunday 6-4 vs a strong Pennsylvania State Athletic Conference (PSAC) adversary for Bloomsburg this season; Mercyhurst University who entered the game ranked ninth in the nation.
The Senators’ most recent performance should grab Bloomsburg’s attention, alerting them this series will require strong play collectively to come away with at least a series win.
A couple of big hitters the Huskies will have to strategize around this weekend are Najay King and Justin Worley.
King who’s batting .400 has recorded a hit in all three games so far this season including a home run along with 7 RBI’s. He doesn’t get himself out either, with an on-base percentage of .571 King makes you throw him strikes or he’ll take the walk.
Worely, on the other hand, started the season slow going 0-3 in the opening game but has heated up especially in the most recent game going 2-4 with a triple.
Opposingly on the mound, Bloomsburg needs to be ready for two slingers who both have an ERA under two through their first appearances. Brent McMillion (0.00 ERA) and Mckinley Scott (1.80 ERA) present a tough opposition for Bloomsburg’s hitters. Not only an impressive initial ERA but opponent batting average as well with McMillion posting a .160 and Scott a .250.
Spotlighting these statistics strengthens the assertion the Huskies will have to be in top form in order to have a successful weekend.
This is the first games between the two programs in their history.
With PSAC play starting in a couple of weeks, it’s imperative for the Huskies to build positive momentum heading into those key matchups.
The Huskies remain ranked no. 3 in the Atlantic Region according to the coaches’ poll along with receiving national votes in the National Collegiate Baseball Writers Association (NCBWA) polls.