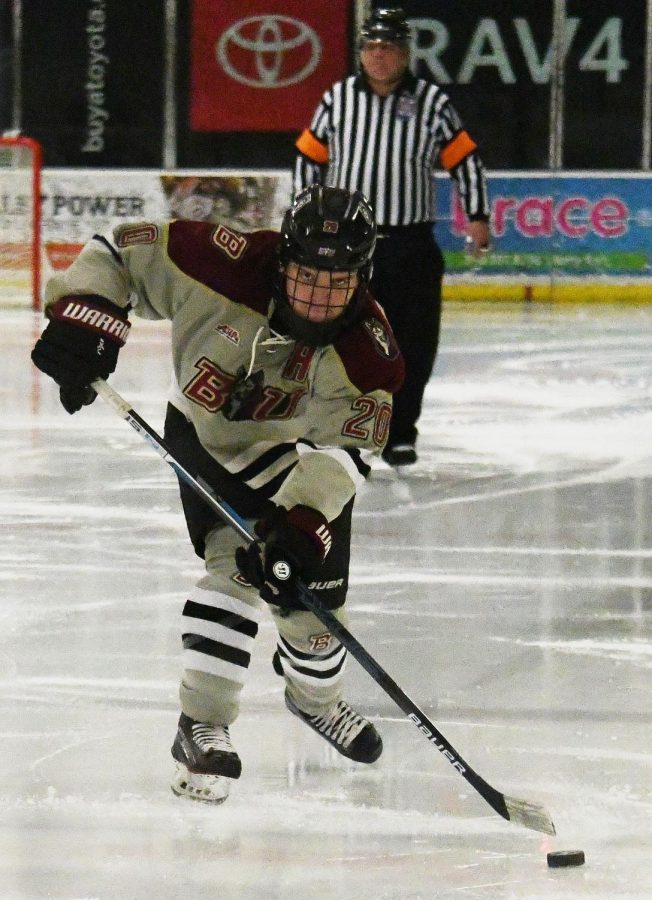 Ryan Thomas (20) sends a puck into the offensive zone.

For the first time in program history, the Bloomsburg University men’s club ice hockey team has been invited to the Collegiate Hockey Federation’s 2020 Federation Cup.

The national tournament featuring the best division II club ice hockey programs in the country will be held in West Chester, P.a. from March 10-15.

“This is something we’ve been working towards since we were freshman.” Senior Ryan Thomas stated, “Every year it seems like we continue to take another step in the right direction towards the ultimate goal of a national title.”

The Huskies finished the regular season with a 16-5 overall record and defeated Alvernia, 7-3, in the opening round of the Delaware Valley College Hockey Conference (DVCHC) tournament.

Bloomsburg then fell to Penn State University (PSU) Harrisburg by a final score of 6-3 in the semifinal round of the DVCHC tournament.

PSU Harrisburg went on to fall to Kutztown in the championship game, giving the Golden Bears the 2020 DVCHC title. Bloomsburg, Kutztown and PSU Harrisburg will be the three teams representing the conference at the national tournament.

Senior Darren Barder and junior Lucas Styles lead the Huskies with 11 goals and nine assists each for 20 total points.