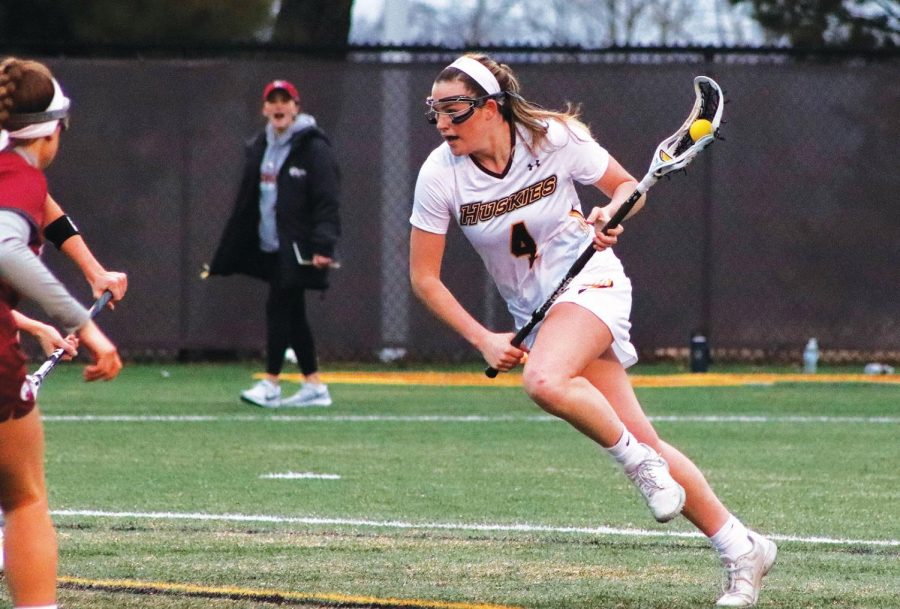 The Bloomsburg University women’s lacrosse team was able to hold their own against an impressive Lock Haven University offense and emerge victorious this past Tuesday evening. It was a 10-7 win for the Huskies, as their record now improves to 2-1 for the season while the Bald Eagles’ season starts off with a 0-1 record.

An early offensive presence was displayed by the Huskies, as within the first seven and a half minutes of play, the women racked up the score to a 5-0 lead. The Bald Eagle’s defense was unable to stop the athletic prowess of junior Abby Bergman, who scored the first goal of the night. This score would make her fifth of the season, and would not have been possible without an assist from junior Anna Dempsey.

Lock Haven then tried to capitalize on a won draw control, but a turnover was then caused by junior Allison Bardman, who demonstrated the power of the Husky defense and set up freshman Kelsey Clauss for a goal. Clauss’ goal increased the Husky lead to 2-0, and earned her fourth goal for the year.

Senior Cailyn Gormley would then capitalize on another offensive mistake by Lock Haven, causing a turnover that would send the lead to 3-0 after an assist from Clauss. The Husky defense had really begun to show their dominance, as the Bald Eagles had again turned the ball over after winning a draw.

Lock Haven started to feel the pressure of the Husky offense and used a timeout to help slow momentum, which had no effect. With 25.53 left in the half, another assist from Clauss gave Bergman her second score of the night and pushed the lead 4-0. Clauss continued her offensive presence, as she quickly earned her third assist after setting up sophomore Kelsey Kilgallon for the goal at the 23:24 mark.

The Lock Haven offense finally was able to get on the board at the 22:14 mark, leaving the Huskies still four goals ahead of their opponent. The Huskies then found themselves back on the board about three minutes later. A goal was scored by sophomore Erica Wolfgang, who managed to nail a shot into the Bald Eagle’s net almost instantly after entering the game.

The last six minutes of the half saw the Husky defense step up as senior goalkeeper Angela DiPasquale racked up two saves to preserve the Husky’s lead and end the half 8-1.

As the second half of the game began, it became evident for the Huskies that this Lock Haven team showed no signs of giving up. An opening goal by the Bald Eagles quickly sent the score to 8-2. Clauss was able to fire back with a goal of her own and push the lead up to seven. A pair of goals would be nailed by both teams, and sophomore Abby Kalish would score the last Husky goal of the night and put her team at the double-digit mark.

Only 24:07 remained in the game at this point, and the Bald Eagles would begin their last big offensive push to stay alive in the game. Choosing to run a play instead of a free position shot, Lock Haven was able to score another point and mark the score at 10-4. The Bald Eagles would continue their push and score four unanswered goals and leave the game within reach at 10-7.

Their offense would not be able to stop the defensive force of DiPasquale, who did manage to save five shots during the run, and the Huskies closed out the game with the final possession and hold on for a 10-7 victory.

Notable performances by the Huskies offenders were achieved by Clauss and Bergman. Clauss reached three goals and assists for the game, while Bergman made three goals. The defensive standouts were DiPasquale, Dempsey, and junior Tiffany Diachynsky. DiPasquale made 13 saves and grabbed a pair of ground balls during the game. Dempsey won four draw controls and Diachynsky caused five turnovers and gobbled up five ground balls.

Action will resume for the Huskies next Friday as they will be on the road for Wilmington, Delaware. A match is set for 3:00 p.m. against the Wilmington for a non-divisional game.