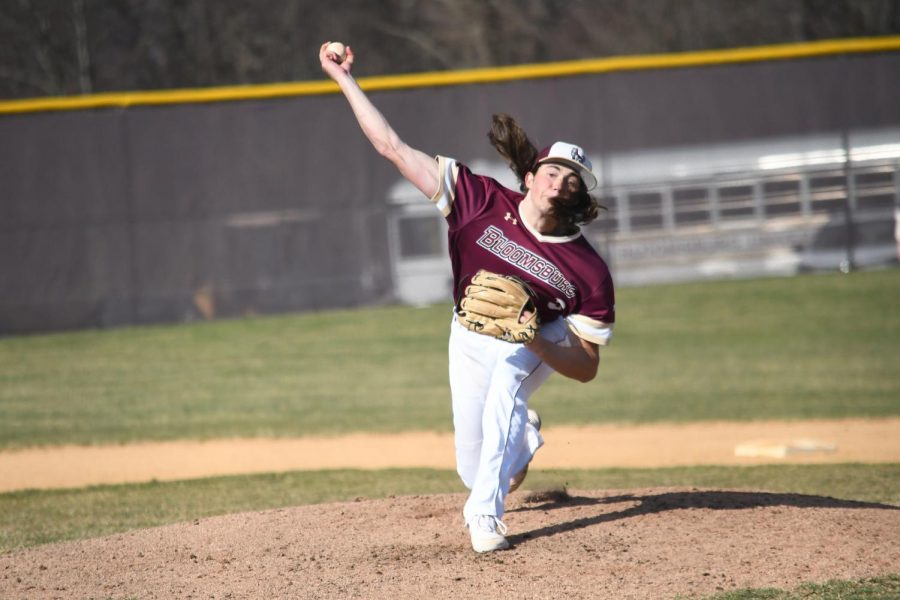 Nick Stoner pitched a complete game while only allowing one run in his most recent game against Davis and Elkins.

Rolling into last weekend, the Bloomsburg baseball team expected a three-game set against Davis & Elkins College, mother nature had other ideas in mind. Field conditions were too poor for a game to be viable Saturday, so the Huskies had to settle for a doubleheader on Sunday.
Both games Sunday saw Bloomsburg come away with comfortable victories at 6-2 in game 1 and 6-1 in game two. However, in game one, the Huskies had a flair for the dramatics with the offense being shut out until the top of the seventh when the bats got hot.
Senior Cole Swiger initiated the rally with a leadoff single, then after advancing to second off of another base hit by redshirt junior Christian Giotti, scored resulting from a ground-rule double poked by senior Gianni Sinatore. With runners on second and third, Senior Andrew Holmes dug in and ripped a double of his own to pull Bloomsburg ahead 3-2.
After a pitching change from the Senators, Bloom continued their late-inning onslaught when junior Kyle OFier stung a single down the right-field line with the bases loaded platting the runners from second and third.
Sophomore Anthony Viggiano topped off the offensive surge with another base hit bringing home the final run of the inning. Collectively, the offense saw 11 batters’ step in the box scoring six runs off of six hits and two walks.
Toeing the rubber, senior Chad Cooperman and junior Nick Stoner both earned their second victories on the year. Cooperman chucked all seven innings in game one, allowing only two runs off of four hits and two walks with five strikeouts.
Stoner, meanwhile, has been nothing short of excellent in his early appearances for the Huskies. Coming off of a career-high 13 strikeouts in his 2020 debut, he kept up the heat in game two retiring 11 batters on strikeouts with just three hits and one walk. Opponents are batting a measly .125 against Stoner so far this season, if he keeps this up the Huskies will have an electric one-two punch at the top of their rotation.
Heading towards this weekend, Bloomsburg is preparing for a slate of two doubleheaders at Goldey-Beacom College. The Lightning has been hot and cold to start off the year so far with a 6-6 record splitting games evenly at home and on the road.
The Husky pitching staff ought to be licking their chops heading into this match as Goldy-Beacom has a lowly team batting average of .218. A few diamonds in the rough in the staff need to take note of though, are Marshall Awtry batting .381 and leading the team with three doubles and Ivan Solis batting .300 and leads the team with hits at nine.
Otherwise, the Lightning offense has seven players who hold a batting average below .200. The mound isn’t treating Goldey-Beacom to kindly either, as a staff averaging a 4.18 ERA (Earned run average) with only one of their hurlers, Luke Taylor, maintaining an ERA below three (2.31).
A team average below .250 while giving up over four runs per game isn’t a consistent winning combination, and Bloomsburg should look to pounce on the Lightning deficiencies.
This will be the first time in program history these clubs have matched up, so the unfamiliarity factor may be a roadblock the Huskies will have to navigate around initially.
Bloomsburg will be up and at it early both days of the weekend as the first pitch is slated at noon.
With Bloomsburg’s top conference competition East Stroudsburg and Millersville, off to a hot start as well, it’s imperative for the Huskies to handle their business this weekend and return home with four more notches added on to their win column.