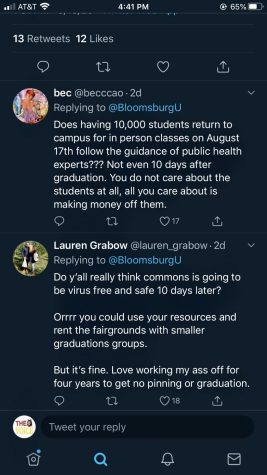 Some recent Bloomsburg University grads are fuming that they won’t get the chance to cross the stage to collect their diplomas this summer, in wake of the announcement making the 2020 graduation ceremony virtual on August eighth.

In interviews and social media comments, grads said “trash decision”, and also pointing out the conflict of bringing back students for face to face instruction just over a week later.

Those feelings of resentment, anger, and frustration have flowed in unison with grads willing to comment further on the situation thus far.

“It’s apparent that administrators didn’t want to put in any extra effort to make us feel special feel special, and it just makes them seem disinterested in us because we won’t be spending any more of our money there.”

“I honestly think the school could have done a lot more for their seniors and has other plans made up to get some type of recognition for everything we endured during our years at Bloomsburg.”

Gabel-Tripp elaborated further, explaining how he may never see people again that he otherwise would have in a typical commencement ceremony citing “that’s what hurt me most.”

Tyler Millets stepped out farther, saying he feels Bloom “cheated” the 2020 class. He as well noticed the oddity of Bloomsburg’s reasoning for online graduation being adherent to social distancing guidelines, but then turning around just a little over a week later and bringing back students on campus.

Millets concluded, suggesting a lot of potential ideas were ignored that could’ve worked and it’s a “shame that they failed to do so.”

Chelsea Soto followed in suit and theme, highlighting the “many tears and sleepless nights” students endured during their time in Bloom and “deserve” in-person graduation.

Michaela Poulard another fellow graduate who also held a leadership role during her time at Bloomsburg as the President of Black Cultural Society described feeling “deprived” of her senior year. Poulard also won’t get the opportunity to visualize her dream of being the first person in her immediate family to graduate college.

“Are we not worth a proper goodbye? Is the class of 2020 not worth more than a zoom call?”

Poulard feels not only herself but the entire 2020 graduating class deserves answers to those questions.

Ashley Marshall feels the same heart searing sting of not being recognized properly for being a first-generation college graduate. Marshall details her feelings calling the announcement “a slap in the face”. Added with feelings of “disappointment and heartbreak”, with how President Hanna initially postponed the original date leaving the new grads hopeful to then just canceling the outdoor event completely with seemingly no effort put forth to find an alternative solution to give the class their well-deserved recognition.