Taylor Baker, a junior at Bloomsburg University, says that this call for resignation is in response to Hanna’s past sexual harassment allegations, and his current “gross mishandling” of the COVID crisis.

The sexual misconduct allegations against Hanna came in 2018 from a female secretary working for him at the time, stating that Hanna had made her feel very uncomfortable and touched her inappropriately. The allegations didn’t seem to amount to anything, however.

Baker said in an interview on Tuesday that these sexual misconduct allegations against Hanna are what made him feel that something significant needed to happen. After he saw Hanna’s “obnoxious, belittling video message” sent to students on August 25th, he decided to take action and do it himself.

Baker holds Dr.Hanna responsible for the massive COVID outbreak on campus. “He forced students to return to campus just so the University and town of Bloomsburg could pocket their money,” he claims in his petition. Also, instead of taking the blame himself, he is placing it all on the students.

This petition for resignation is now close to 250 signatures but still has yet to be officially recognized by the university. Baker believes that if 500 to 600 people can get behind the cause, and high-powered individuals start taking recognition that he can achieve his goal.

Baker says that the university’s ruling does not discourage him and that he will continue to spread the cause and strive to gain support.

Members of The Voice reached out to Dr.Hanna regarding the petition on the seventh of September, but no response was given.

Link for the petition – https://www.change.org/BasharMustGo 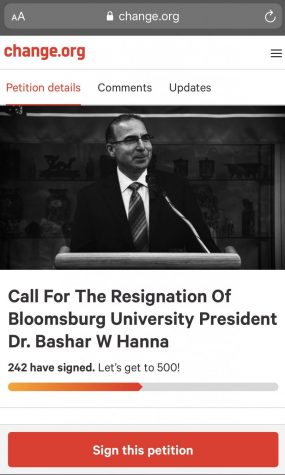