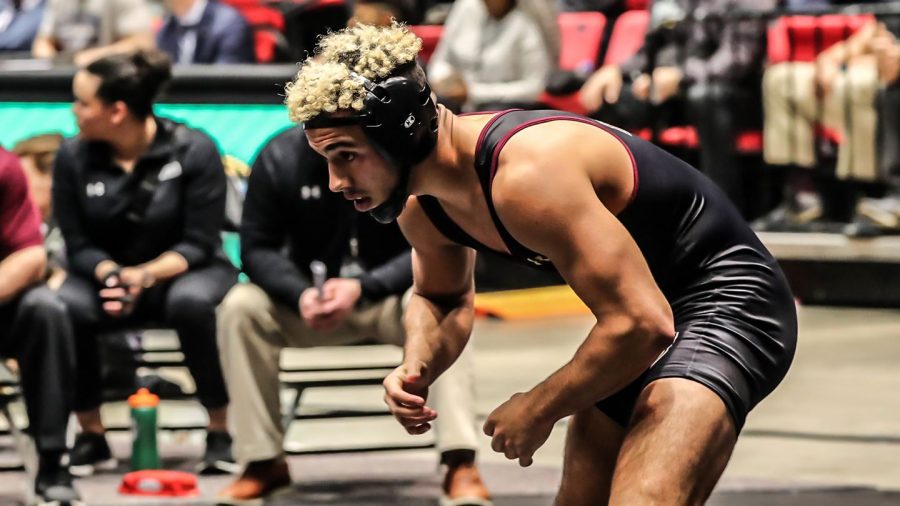 Junior Alex Carida, an NCAA qualifier last season, is tied leading Huskies in wins at two early in the season.

Bloomsburg University’s wrestling team felt the brunt of their competition this past weekend in their season-opening matches. After nearly a year of no competition, it seems the husky squad may still have some rust to shake off. They traveled to Hofstra University (Hempstead, NY), where they dropped their first dual meet of the season (41-6). Then proceeded to fall to Drexel University in an exhibition dual, six matches to four.

Hofstra Recap:
Josh Mason, a redshirt Sophomore from (Blue Mountain, Pa) slated the Huskies’ only win versus Hofstra. Mason pinned his opponent, Vinny Vespa, early in the second period 141-pound bout. Mason is one of the Husky team’s top guns, mounting a team-high of ten victories by fall last season and holding the number 21 rank in the nation at 141 pounds this season.

Aside from Mason’s victory, the rest of the team did not fare well, losing all nine remaining bouts. Eight of which came by an extra point decision from the Hofstra team.
After the official dual was over, the Huskies wrestled another six exhibition bouts against the Hofstra team, splitting them even at three wins and three losses. 133-pound freshman Antoine Allen picked up his first collegiate win with a dominant 11-5 decision over Hofstra’s Matt Templeton. Following Allen, Josh Mason picked up his second win at 141 pounds in a tight decision over Justin Hoyle, 3-2. The Huskies’ final exhibition bout victory came from Sophomore Christian Gannone, where he defeated Charlie Kane in a 9-7 barn burner at 149 pounds.

The Huskies were able to get the ball rolling a bit when they faced the Drexel Dragons, coming away with four victories. In a fixed exhibition dual, the teams wrestled two matches at 149 and 157, with no bouts held at 125 or 141. Husky junior, Alex Carida, gained both victories in the 157-pound bouts; shutting out Drexel’s Max Livingston 9-0 in a major decision and shutting out Drexel’s Felix Belga in a regular decision 4-0. At 174 pounds, redshirt freshman Tanner Culver secured his first collegiate victory with a commanding 17-5 major decision over Drexel’s Nathan Lapinski. Huskies heavyweight, Jarret Walters, was able to pick up the second fall of the day for the huskies, pinning Drexel’s Derek Rose just over a minute into the final bout.

BU’s wrestling team is in action again today when they travel to the University of Buffalo (Buffalo, N.Y.) to take on the Bulls at 3 p.m.