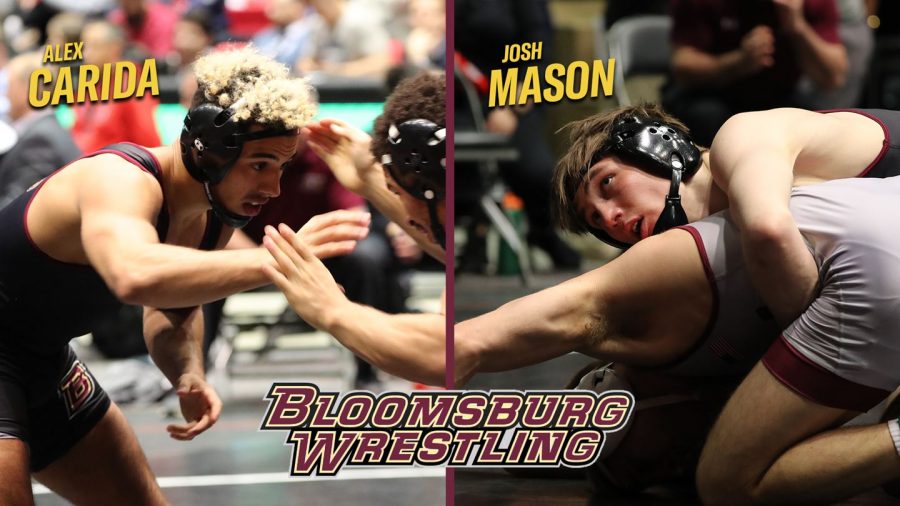 The Bloomsburg University wrestling team is heading to CURE Insurance Arena in Trenton, New Jersey, this weekend to compete in the Division I Mid-American-Conference (MAC) championships hosted by Rider University. The Huskies’ will be competing in the MAC Championships for the second straight year after transferring from the Eastern Wrestling League (EWL) Conference in 2019. The Huskies finished 14th in the team standings at last year’s championships.

The Husky lineup for the weekend will be as follows:

Six members of this Husky lineup will see postseason competition for their time this weekend. At 125 redshirt freshman, Bronson Garber will wrestle in place of redshirt senior Willy Gerard. Gerard, a recent NCAA qualifier in 2019, will miss out on this postseason due to injury.

Virginia Tech transfer and local area Benton Native Cole Rhone will take the spot at 133. Rhone captured his first two collegiate victories in the Huskies’ last dual meet with a 2-1 win over Buffalo’s Caleb Svingala and a fall against Tommy Maddox in overtime. Rhone goes into this weekend with a 2-0 record on the season.

Redshirt freshman Tanner Culver will wrestle at 174, holding a 2-3 record on the year. In contrast, freshmen Matt Benedetti at 165 and redshirt freshman Bruno Stolfi at 184 go into the tournament, still searching for their first victory. At 197 redshirt freshman, Chase Dull was expected to compete; however, he will have to miss out due to injury.

Redshirt sophomore Josh Mason and junior Alex Carida serve as the two stand-out wrestlers of this lineup. Mason is heading into this weekend’s competition with a 3-1 record and is pre-seeded eighth in the 141-pound bracket. Mason fell one match short of qualifying for the NCAA tournament at last year’s conference championships and finished his season with a 19-10 record, ten of the victories coming by way of fall.

Junior Alex Carida will enter the conference championships ranked thirtieth in the nation at 157 and seeded fourth in the 157 conference bracket. Carida successfully qualified for the NCAA tournament at last year’s championships by winning his true-sixth place match over Ohio’s Zac Carson and finished his season with a 17-12 record.

Head Coach, Marcus Gordon, spoke about the upcoming championships in an interview on Monday. “A tricky year, but we’re just staying focused on keeping the team motivated and making sure they’re peaking at the right time.” Gordon went on to say that the team is feeling a lot better at this point in the season than they would if it were a normal one. “Wrestling a twenty to thirty match season can drain a person; coming off of a season with only three to four matches wrestled has them feeling fresh and ready to go.”

The MAC Conference championships will kick off Friday @ 11 am and continue on Saturday @ noon.