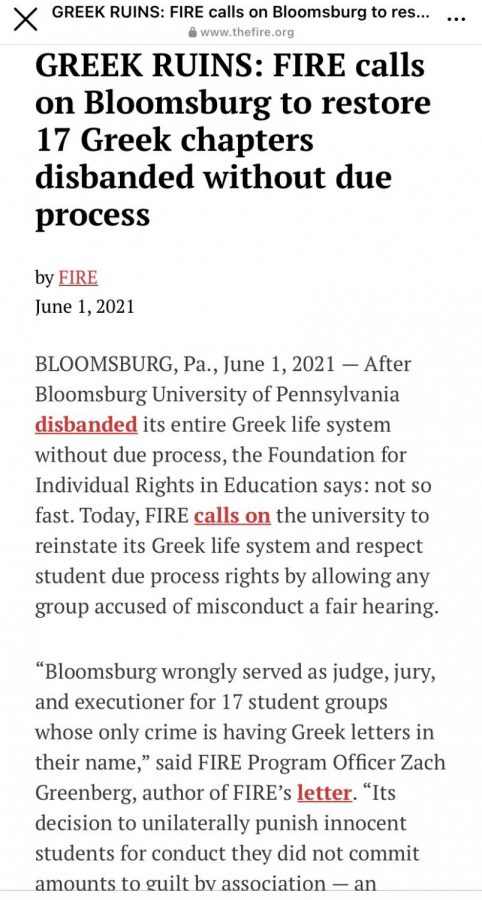 A national nonprofit educational foundation has publicly called for BU to restore all 17 of its fraternities and sororities. This call for restoration comes after the decision to disband said chapters was made on May 13th without an official due process.

FIRE, the Philadelphia-based Foundation for Individual Rights in Education; made the call for Greek life restoration in a statement on their foundation’s website, as well as in an official letter sent to BU President Bashar Hanna. ‘FIRE’ foundation’s restoration statement and official letter highlight BU’s student code of conduct and constitutional violations that exist due to their decision to sanction this disaffiliation of Greek life as a whole.

“Bloomsburg’s decision to unilaterally punish innocent students for conduct they did not commit amounts to guilt by association – an egregious practice that has no place at any institution of higher education” stated the ’FIRE’s program officer Zach Greenberg, author of the official letter.

FIRE’s letter and call for restoration come after a prior letter submission by their foundation on March 23rd. This letter cited their concerns with potential student rights violations that arose from BU’s January 28th threat to disband all Greek life organizations, which ‘FIRE’ noted amounted to guilt by association. FIRE goes on to mention in their call for restoration that at least one sorority, Phi Iota Chi, had no recent history nor allegations of misconduct when disbanded. The sorority had appealed to BU officials for a proper due process. However, officials ultimately denied this appeal.

FIRE explains in their statement that denying Phi Iota Chi this due process and proclaiming the entire FSL community guilty by association holds Bloomsburg in direct violation of the first and fourteenth amend amendments. While at the same time violates their student code of conduct.

FIRE was founded in 1999 by University of Pennsylvania professor Alan Charles Kors and Boston civil liberties attorney Harvey Silverglate after the overwhelming response to their 1998 book The Shadow University: The Betrayal Of Liberty On America’s Campuses. FIRE foundation’s call for Greek life restoration, as well as their official letter submitted to Bloomsburg University President Bashar Hanna, can be found here.

The Bloomsburg University Director of Communications was contacted for an interview concerning the subject, but no response was. The Voice will continue to update viewers on this subject as more details and updates are brought forth.