A Bloomsburg University student navigates a Harvard University internship with the Mozilla Foundation.

Harvard University, the holy grail for scholars around the world. This ivy league school has been talked about among students; and introduced frequently in media and film. One of Bloomsburg Universities own, Kobe Mccloud has been working among alumni and students at this prestigious college.

Kobe Mccloud is a senior at Bloomsburg University. He is 21 years of age and was born in Whitehall, Pennsylvania. He is a dual major in Media and Journalism and Political Science.

Freshman year of college, Mccloud declared his media and journalism major. He began to venture out and apply himself with skills like Adobe Photoshop, Premiere, Illustrator and After Effects.

“I picked up skills that were more tangible and, in the long run always kept my hands and mind going on some project both for personal and educational purposes,” he reminisces.

These skills are what assisted Mccloud in getting his internship at Harvard University with the Mozilla Foundation backed tech startup. This position consists of creating designs, iconography, and manufacturing the aesthetics and visuals of the company. Mccloud declared a political science major later in his college journey. Since he is also actively studying this subject; his responsibilities do not end with the ones above.

“I also spend time doing research on cyber security, cyber espionage, data privacy, and internet privacy and how to communicate these aspects visually and verbally.

His political science major dual major led Mccloud to apply his skills in international relations, politics, history, and foreign policy. He attributes a portion of his knowledge on novels such as “Your Country, Our War, by Kathryn A. Brown, Rigged: America, Russia, and One Hundred Years of Covert Electoral Interference, by David Shimer.” These books focus on history, wars, and political affairs.

This astounding opportunity at Harvard University is going to assist Mccloud in reaching his long-term objective.

“My ultimate goal and mission is combating disinformation in the digital age of politics, policy, and democracy to preserve sovereignty.”

This undergrad student strives to use his said skills to position himself in a future career with organizations and government agencies such as the U.S State Department, United Nations, NATO, CIA, Netflix, Apple, and Sony. His major keeps him on his feet because there is always information to analyze and debunk in the media. In terms of politics, there is always new political occurrences taking place to read and digest. Mccloud is holding these skills close; and will soon be an indispensable component of any workforce.

Until his education wraps up, Kobe Mccloud is content in his set routine of going to classes, reading up on current events, attending meetings and doing homework. 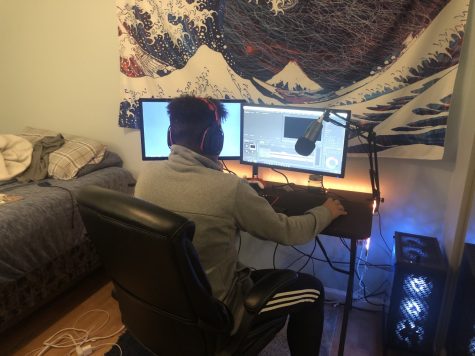