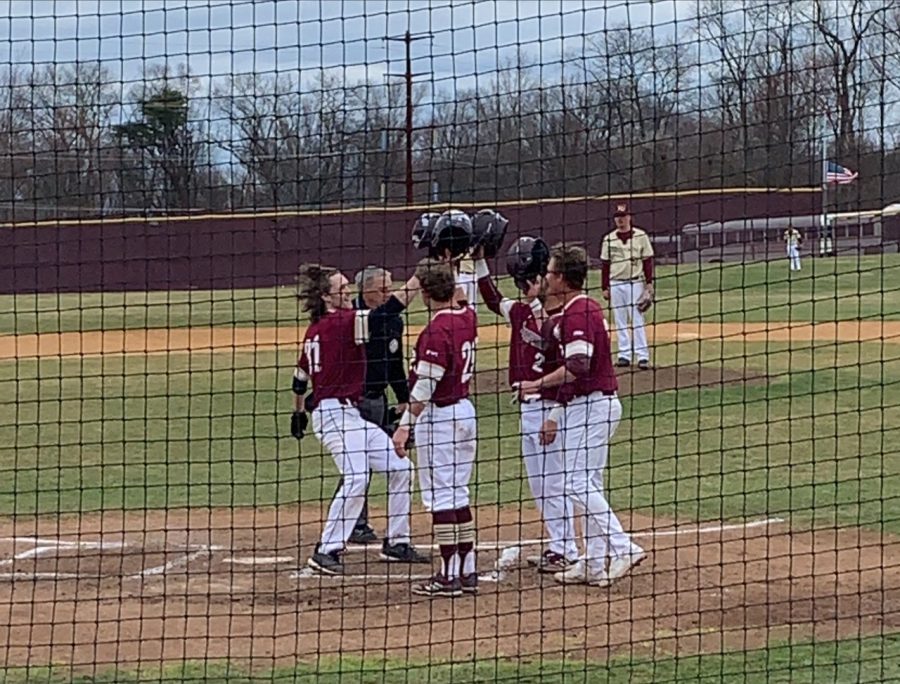 A crew of Huskies celebrate a home run

The minutes until game time ticked down, as Bloomsburg anticipated the matchup vs. PSAC rivals Kutztown on Friday. The Huskies were coming off of a two day losing streak vs. St. Thomas Aquinas and Adelphi University, looking to regain momentum vs. the Golden Bears.

The count was 0-1, with two outs in the home half of the first inning, with Redshirt Junior Ben Newbert (Cynwyd, PA) at the plate. Next thing you know, the ball was in the left field grass, and the Huskies slugfest began. After two innings, Bloomsburg found themselves with a comfortable 8-0 lead, thanks to home runs by Brandon Ernst (Limerick, PA), back-to-back homers from Brady Gibble (Sinking Spring, PA) and Carter Chasanov (Magnolia, Del.), and a two-run bomb by Kyle OFier (Pittstown Township, PA). “The guys were really pumped, to have a possibly an all-time great game can really flip a team’s overall confidence,” said Newbert regarding the big day at the plate. On the mound, starting pitcher Jared Marshman (Berwick, PA)  allowed just one run and four hits through seven innings with 12 strikeouts, earning the W. The final score was 18-2. “Our defense was making every play on the field, so it took a lot of pressure off of me to go out there and execute,” said Marshman.

In Saturday’s double header, the Huskies took the adrenaline from Friday and ran with it. The score was much closer in game one, as the rivals were tied 3-3 going into the sixth inning. However, the Huskies found a way to come away with the win, as they scored the go-ahead run on an unusual balk, which allowed Newbert to score. Head Coach Mike Collins praised the team’s bullpen, saying “Game two was tight, but the difference was our bullpen. Nate Baranski was outstanding in relief.” Baranski (Larksville, PA) allowed just one hit in three innings to earn his third win on the hill.

In game two, Bloomsburg led 7-0 after three innings, thanks to Chasanov and OFier’s RBI hits. Despite Kutztown’s threat to tie the game in the seventh, the Huskies were able to hang on to win 10-8.

Pitching continued to impress in Saturday’s wins over the Golden Bears, as four different pitchers held Kutztown to 12 hits and eight runs through seven innings. The Huskies improved to 14-9-1 on the season.

The Huskies bounce back after a four-game rough patch to sweep their division rivals Kutztown. Friday was the team’s first home game since March 18th and the Huskies didn’t disappoint, smacking eight home runs and scoring 18 runs in the ball game. Newbert accounted for three of those homers while driving in seven runs. Captains, OFier and Chasanov also got into the home run action on Friday, while Marshman earned his fifth win.

Although the long ball wasn’t a factor in game two, the Huskies were still able to edge out the Golden Bears in a 4-3 victory. Newbert’s hot bat continued to be a factor in the series as he picked up an RBI and a run off a pair of doubles. Anthony Viggiano also drove in a run while collecting two doubles in the game as well.

As the weekend started with power, it ended with speed. The Huskies were able to steal 10 bases to go along with their ten runs and complete the sweep over Kutztown. Brady Gibble and Jonathan Labarbera each stole three bases while OFier led the way with a pair of RBIs. The Huskies were able to capitalize on some Kutztown miscues, scoring five runs off of errors in the game. Sophomore Matt Vernieri also earned his first save of the year.

Where Things Stand in the Season

The Huskies currently sit in third place in their division. They trail only West Chester and the always dangerous Millersville who are on a ten-game win streak. Millersville has made it clear that they are the team to beat in the conference as they haven’t lost a game to anyone in the PSAC East all year. The first matchup between the Huskies and the Marauders won’t be until April 29th where the Huskies, who have a winning record at home, will host two of the three games.

Before they think about the Millersville series, the Huskies must get through the 15-3 West Chester Golden Rams. After a solid first two months of the season, we’ll see if the Huskies can keep it up in April as they continue to battle for the top spot in the PSAC East.

After a successful weekend, Bloomsburg is sure to have a lot of momentum going into this next week of play. St. Thomas Aquinas sits at 9-12 on the season, but they’re on a four game winning streak that started when they beat Bloomsburg 10-9 on March 22nd. Bloomsburg being the home team this go around, where they have a 4-2 record, could give Bloomsburg the momentum they need to come out victorious.

The Huskies lead the PSAC in home runs, and the team energy is showing. The Huskies will look to build on this energy to further develop both sides of the ball. When asked about the road ahead, Coach Collins said, “The long ball has been a key feature in our offense for a while now. To repeat our past success, we need to score runs when the wind is blowing in as well. We have to score runs with situational hits from time to time, although homers are fun.” Collins also notes that the Huskies need to develop depth in the bullpen, adding, “We have a lot of critical innings late in games and we need to be better in those spots.”

The PSAC East is a very tight race and every win is important. A win for Bloomsburg this weekend could put them closer to taking the second spot from West Chester and bumping them down. A win against St. Thomas Aquinas on Tuesday could be a good measuring stick of Bloomsburg’s resilience, and a great way to build confidence going into a series against West Chester.