Mansfield Gives Bloom a Run for Their Money, Sweeps Huskies in Weekend Series 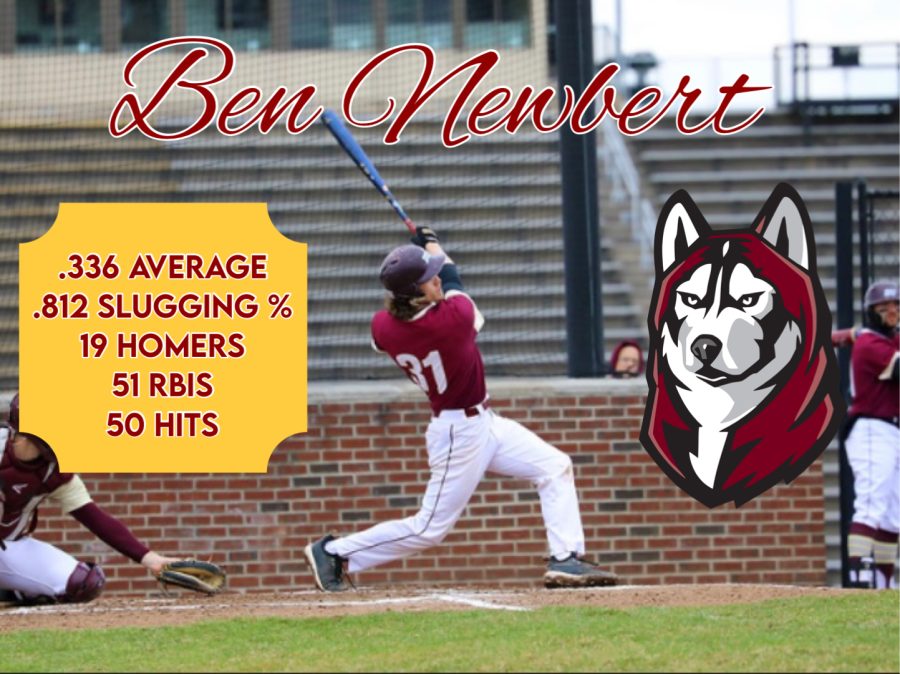 Homers Are Not Enough For Victory

It was the top fourth inning, when designated hitter Ben Newbert stepped up to the plate. The pitcher kicked and delivered the pitch. Newbert swung and blasted it into the left field grass. Bloomsburg’s bench roared, as Newbert, also known as “Bert,” just broke the single-season home run record, with 19 on the year.

The game remained tied until the 13th inning, when Mansfield walked it off with an RBI single, to take the 6-5 win. Despite the loss, the Huskies hopes remained high, as they had home field advantage in the double header on Saturday.

Game one found the Huskies disappointed, as pitchers struggled with command, and the bats never got rolling. The Mounties scored nine runs in the second, and Bloom was not able to answer back. Mansfield took the first game, 9-1.

Coach Collins was asked how he encourages his team in the midst of the offensive struggles. He commented, “I think we just stay in the moment. We’ve swung the bats really well all year… You gotta have a short memory in this game, you just focus on the next pitch and next at-bat.”

The Huskies bats regained momentum in game two, as they had 17 hits and scored 14 runs. Redshirt senior Kyle OFier was 4-for-5 with a homer and scored four runs. Newbert hit two home runs, raising his slugging percentage to .812 on the year.  Carter Chasanov also continued the slugfest with a homer of his own in the sixth. Despite their offensive success, BU lost the final game of the series, 18-14.

From Second to Fifth in the PSAC

The Huskies moved to fifth in the standings after being swept by Mansfield. The Mountaineers improved to a five-game winning streak, while West Chester and Shippensburg also have impressive win streaks after their past week of games. Although the Huskies moved down three spots in the standings, they have a highly anticipated matchup coming up against Millersville who has consistently been the best team in the PSAC East.

As the Huskies prepare for the weekend, they will look to clutch veterans Newbert, Chasanov and OFier. All who are tops on the team in home runs, batting average and RBIs. We can also expect to see Jared Marshman on the mound against Millersville as he has been nothing short of an ace thus far for the Huskies.

While West Chester, Shippensburg and Mansfield all had big weeks, the Huskies will try to pull themselves out of a hole with their weekend series. This weekend is the last big series for the Huskies until the PSAC tournament. After Millersville, the Huskies will have a home game against the University of Pittsburgh at Georgetown, followed by a conference battle against last place Lock Haven.

Great Promise, Not the Ideal Result

Despite the three losses to Mansfield University, Bloomsburg showed bright spots throughout the series. In the first matchup, Newbert broke the single season home run record for the school; previously set by Ryan Kirman in 2016.

Bloomsburg saw a flurry of good hitting in the second game of the double header on Saturday. OFier hit one home run and batted three runs in. OFier has had great offensive success this season and has proven himself as an important leader on this team.

Anthony Viggiano hit two doubles and scored twice. Like OFier, Newbert is another player that the Huskies need, if they want to make another run at the PSAC title this season. Nine different Huskies accounted for the 17 hits of the afternoon. Production from multiple players is a good sign as the PSAC playoff tournament gets closer.

Huskies On the Horizon

The Huskies (21-16-1) have tough battles ahead. They travel to Millersville on Friday to take on the first-place Marauders. The series continues on Saturday as the Huskies host the Marauders for a doubleheader on Autism Awareness Day.